From small offices in Damariscotta, a nonprofit called Upstream is running a nationwide movement to eliminate single-use plastic at the producer level.

“We can’t recycle or compost our way to a sustainable future,” said Executive Director Matt Prindiville. “If we’re only working at the consumer end, we’re only cleaning up waste created by this corporate juggernaut. We’ve got to work upstream. We’ve got to change the way companies deliver products.”

Upstream—funded by private foundations and donations—is a “behind the scenes” group, Prindiville said, founded in 2003 by Bill Sheehan of Athens, Ga., and Helen Spiegelman of Vancouver, B.C. They were leaders of the zero-waste movement, working in the 1990s to expand awareness of recycling and composting.

“They were told they were crazy,” said Prindiville. “And here we are, 20 years later, and zero waste is the big meme. The idea has matured and become part of the modern lexicon of ideas.”

But, he said, they realized a sustainable future depended on eliminating waste at the source, a concept called “extended producer responsibility,” which means business should replace “the throw-away society” with stewardship by reducing plastic use.

The organization made its headquarters in Damariscotta thanks to Prindiville. A policy expert and campaign strategist, he had worked for the Natural Resources Council of Maine, developing extended producer responsibility laws in Maine, resulting in Maine’s first law for electronics like computers and TVs. As part of the bill’s development, NRCM brought Sheehan in as an expert witness. Sheehan subsequently asked Prindiville to head Upstream.

Upstream doesn’t specifically focus its efforts in Maine. But the state sees the effects of plastic waste, said Prindiville. For example, he said, millions of tons of plastic in the ocean, originating mostly from single-use packaging like to-go containers and plastic bags, degrades into “microplastics” consumed through the food chain.

In the Gulf of Maine, “Everything from zooplanktons up to whales are eating these bits of plastic,” he said. “It’s a concern for Maine’s fishermen and for shellfish farmers.”

• Collaborating with partners to analyze the polluting plastic products and identify alternatives.

Upstream’s targeted actions include demanding that Starbucks use environmentally responsible products and create a waste reduction plan, and requiring that plastic bottle caps be tethered to their bottles. Also in the works is a March 2019 conference to boost plastics and health research and collaboration.

“The groups that have been doing a lot of great work in Maine include the Natural Resources Council of Maine, which is working to support communities in developing bag and Styrofoam bans, and educating communities about the problem of plastic pollution,” he said.

Much of the problem can be fixed simply, he said, such as a recent initiative by the Sea Dog Brewing Company in Camden to reduce plastic straw use. The harder steps, he said, are implementing a systemwide approach and addressing the technical challenges of finding plastic substitutes that won’t endanger the environment.

“Most of the progress has been around awareness-raising,” he said. “There’s been little done to solve the problem. The big wins so far are these community bag bans all over the U.S. and the world. It’s mostly grassroots, where people worked with local councils and developed ordinances. In some cases, that’s bubbled up to the state level, like California’s statewide plastic bag ban.”

Ultimately, he added, “It’s our hope that, because the plastic pollution issue is gaining traction around the world, the big brands will pay attention.”

• The plastic industry projects a 400-percent production increase over the next 30 years, much due to expanded single-use-disposables.

• 25-40 percent of production is packaging; half of packaging is single-use-disposables. 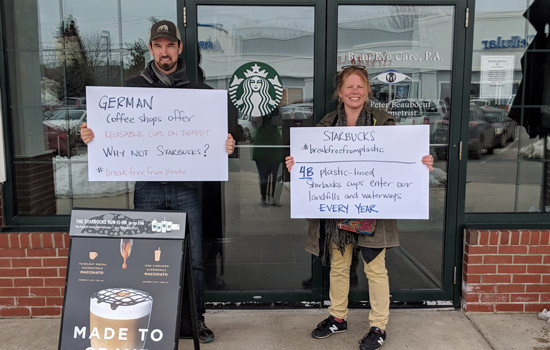 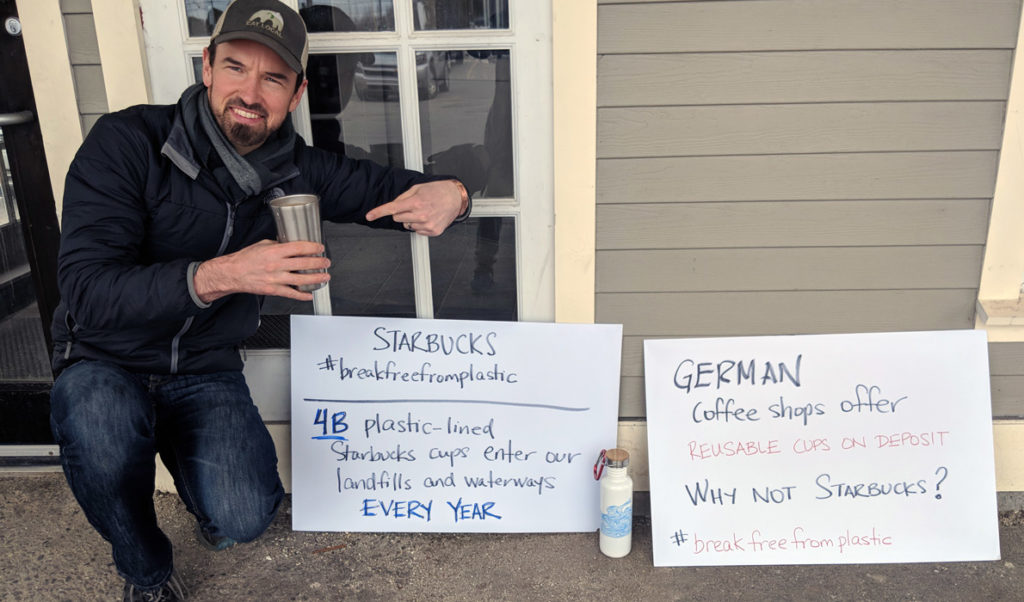 At the Topsham Starbucks