It’s the story of a boy, a girl, and another boy. But Robert Mrazek’s latest novel, And the Sparrow Fell, is not quite a love story. Yes, college student Rick falls hard for Kate, only to learn she’s with his brother Tom, and conflict ensues.

But the larger tensions that drive Sparrow come from the tumult of the times in which the story is set. The Vietnam War, which loomed large over college students in 1967, when the story unfolds, fractures and then partially mends family ties over the course of the engaging and entertaining novel.

“I wanted to explore the boundaries of heroism,” Mrazek, 72, explained in a telephone interview from his home in Ithaca, N.Y. (he summers on Monhegan Island). This is no writerly exercise, though; heroism as both idea and reality have been on display in his life.

During World War II, Mrazek’s father parachuted behind enemy lines to organize Nazi resistance fighters. After the 9/11 attacks, his son volunteered for the army, and served for 15 months in Iraq.

“It was the hardest 15 months of my life as a father,” he recalled.

“All the young men of my generation were faced with a decision,” he said.

Reconciling those contrary impulses from his life gives Sparrow its power and scope.

“This one took me 50 years to write,” Mrazek said, because it took that long to sort out his feelings about the war.

Late in the story, the main character finds himself in a naval hospital, recovering from war wounds. The descriptions are particularly vivid, and that’s because Mrazek found himself in such a hospital.

Mrazek remembers being influenced by a professor at Cornell University who was especially hawkish about the war, arguing the U.S. was “protecting a fledgling democracy.” Like the protaganist in Sparrow, Mrazek was inspired by John F. Kennedy’s heroics in World War II aboard PT 109.

“The beginning of the ‘60s was a time of hope. There was this young man taking the stage,” he explained. “I greatly admired President Kennedy.”

After his graduate school deferment expired in 1967, “I volunteered for the navy and for the Swift Boat program,” a duty very much like JFK’s PT boat experience. But while in officer candidate school, a training accident left him blind in one eye, resulting in a permanent disability and a forced discharge. As he recovered alongside men returning from the horrors of the war, his views evolved.

“It changed my life,” he said. “I was outraged by what those boys were being sent into.”

After his discharge, Mrazek enrolled in the London Film School, where guest instructors included renowned directors Orson Welles, David Lean, and Fred Zinnemann. But 1968 proved dramatic and traumatic, with the assassinations of Martin Luther King and Robert Kennedy, undermining his interest in film.

“It suddenly seemed very trivial to be there,” he said.

So he returned to his native Long Island, N.Y., and landed a job as an aide to a U.S. senator. Later, he pursued and won election to the county legislature, and in 1982, won a seat in the U.S. House of Representatives by a 2-1 ratio in a predominantly Republican district, the so-called Gold Coast of Long Island’s north shore. He held the seat for five terms.

He is most proud of passing 1986’s Amerasian Homecoming Act, a law that brought the children fathered in Vietnam by U.S. soldiers to the U.S. The children were denigrated by the Vietnamese as bui doi, or “children of the dust.”

“Their faces were a painful reminder of that war,” Mrazek explained. “My anger over that war fueled a long, political career.” That career inspired a screenplay for the 2016 film The Congressman, which was largely shot on Monhegan.

“I took a 30-year detour,” he said of his return to film. In addition to Sparrow, Mrazek has penned three nonfiction books and six other novels.

At the outset of the interview, Mrazek confesses to having just checked a webcam set up at his family’s Monhegan Island house, providing a sweeping, 360-degree view.

“It’s my touchstone. It’s my wellspring. It’s my sanctuary,” he says of the island, which he first got to know during during the hectic days of his service in the U.S. House of Representatives.

“I was working seven days a week in the job, and I wasn’t seeing a lot of my family,” and sharing his concerns with a colleague from Maine—probably Jock McKernan, he can’t quite remember—the representative told Mrazek about an island in his district without phone service. In June 1984, he and his wife flew to Monhegan, “and we fell in love with it. It had a tremendous impact on my family. It was a great learning experience for me, too,” seeing how islanders worked together.

The Vietnam War was on his mind before the acclaimed Ken Burns and Lynn Novick documentary was announced, but it seems as if his generation was ready to think about it.

“Maybe it’s time for a reappraisal of that war,” he said. 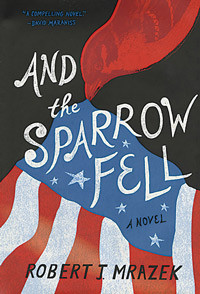 And the Sparrow Fell