“In God we trust; everyone else, bring data.”

For better or worse, we live in the age of metrics. The jury isn’t in yet, but I’m thinking it’s better and worse.

Probably the most colorful example of metrics-driven decision-making comes from the world of sports. A book and then movie called Moneyball chronicled the true story of the cash-strapped Oakland Athletics baseball team building a winner based on numbers, not superstars.

And metrics are understood as essential to succeeding in sports these days. The level of detail available to coaches and general managers is phenomenal.

As a basketball fan, I see this data in blogs and columns about my favorite team: The number of passes made before a shot is taken. The success of shots that come after a dribble vs. no dribble. The personal efficiency rating, which creates a number reflecting how the team performs while a given player is in the game.

Clearly, this provides a superior understanding of the relative value of players. The guy who hits the big shot at the end of the game may be seen as a hero, but if he missed seven of nine shots earlier, that big shot wouldn’t have been needed, so how much of a hero is he?

In the pre-metrics age, baseball scouts were notoriously biased. The prospect’s batting average was pretty low, the scout would concede, “But he’s scrappy. He’s a competitor. He reminds me of myself at that age…”

When credit-card lender MBNA sold to Bank of America, city officials in Belfast, where some 2,500 jobs were based, were nervous about what the new company would do. The mayor and city councilors lobbied the governor to help and met with bank officials to make the case.

But it all came down to numbers. Did the Belfast workers handle more or fewer calls per hour than their counterparts elsewhere in the country?

So where did all this come from? Well, not surprising, from advances in computers. Software developed in recent years makes it easy to count passes on the basketball court, the number of phone calls handled, the number of music downloads sold in New England vs. the Midwest, before noon and after 6 p.m., and on and on.

In the 14 years I worked for the Bangor Daily News, I saw the paper go from evaluating its work based on what editors thought of the stories, to counting the number of times readers clicked on stories on the website. In fact, so sophisticated did web analytics become in my time there that the newsroom featured a computer monitor showing how many people were reading a given story at any time, and how far down their cursors were on the page.

If a story wasn’t getting much love from readers, it would be bumped from the home page. But what about people who might have read the longer stories later, maybe on their lunch break? What about an admittedly small group of readers who are passionately interested in the fate of a local decision? Aren’t these folks valuable customers?

Stories that include sexy headlines—literally and figuratively—are now referred to as “click bait.” Many journalists fear not only a dumbing down, but reckless reporting. (Of course, we’ve been accused—accurately—of “trying to sell newspapers” with salacious headlines as long as I’ve been in the business.)

Here at the Island Institute, we have a monitor in the media department that shows click counts on our stories, and you better believe I like to see which are performing well and which are not.

Click data is far superior to what passed for analysis decades ago. I am chagrined to think about those thousand-word stories I wrote about city council meetings, stories we now know rarely connect with readers.

Having been in the professional work world for more than 30 years now, I know these new tools are greeted as the better mousetrap, and then, after time, the pendulum swings back. Or a new mousetrap is invented.

A legitimate concern, though, lies with metrics supplanting our far more sophisticated human powers of analysis. We all know the story of the student who failed out of school only to become a wildly successful entrepreneur, inventor or artist. Or the community that polls showed to be deeply divided on big issues—wind power, national park, whatever—that came together in the end.

Measuring potential will remain the domain of people, it seems to me. We talk about betting on someone to succeed. The element of gambling is real in human endeavor, and while we sometimes lean too heavily on gut feelings, the bench-warmer can—and often does—step up to the plate and hit it out of the park. 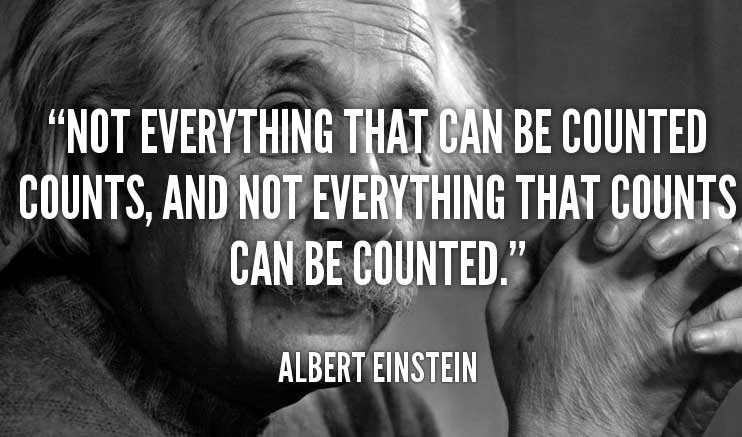