The book cover features snapshots: an airborne glider, a Friendship sloop under sail, a young man in settings connoting adventure and romance. And then there is the author’s prestigious name. But set aside attributes like wealth and privilege which can be associated with kinship in the Rockefeller and Carnegie families.

Of course, it’s hard to ignore those advantages, but I’m willing to theorize that the remarkable life Jim Rockefeller recounts in Wayfarer,his memoir of 92 years of adventures and relationships, is more linked to the blessings of his family ethos than to his family fortune.

The opening chapter catalogues those closest to him, including his mother and father, but also Katy the cook, her spouse Pat, the houseman, handyman Andy Anderson, groundskeeper Thigh Sherwood, and Art the chauffeur. Rockefeller enumerates with fondness and appreciation what he learned from each.

“My childhood was very privileged,” he writes. “There were no material wants. Some years had to roll by before I came to see the greatest gifts given to me in those years: growing up with loving parents, caring friends, who ingrained rules of ethical behavior, self-reliance, and caring for others… The people who cared for our family… were my coin of the realm and as much like family to me as those related by blood.”

After graduating from Deerfield Academy in 1944, Rockefeller went into the Army Air Corps and was based in the U.S. He soon fell in love with aircraft and motorcycles; he already loved boats, automobiles, and engines. This was as much about tinkering and repairs as it was about those in working condition.

Then it was on to Yale University, where the only classes he claims held his attention were one in writing and one on the meaning of cultural artifacts. But after graduation, he discovered another useful subject—celestial navigation—when he and his brother purchased an old Casey cutter, the Mandalay, and a cruise to Bermuda ensued. That Mandalaywas replaced by an old 40-foot Friendship sloop, which was given the same name.

Rockefeller soon gave himself over to a dream of sailing around the world. An early stop was Cumberland Island, the southernmost of Georgia’s Golden Isles, owned by the Carnegie family since the late 1800s and a second home for Rockefeller. His exploration of its natural setting inspired a passion for the place.

But the 1952 visit ignited another passion when he met Margaret Wise Brown, successful author of children’s books. Their instantaneous attraction deepened quickly. She brought Rockefeller to Vinalhaven and her home on Hurricane Sound she’d dubbed “The Only House.” Here she shared a magical meld, including the Vinalhavers she’d befriended, sailing her North Haven dinghy, and living simply.

When Rockefeller returned to Mandalay, there were plans for marriage to follow his cruise, but the two were not to be together again. News reached himwhileanchored at St. Thomas: Margaret had died in a hospital in France while recovering from unexpected surgery.

Grief descended, but now a voyage was underway. He never minimized the impact of his loss, but as the cruise developed, there were other challenges to deal with: relationships with crew, sailing conditions, boat maintenance.

Rockefeller seems to have benefited from personal qualities like optimism and resilience. As the trip unfolds, we are treated to vivid anecdotes about the eccentric, clever, wise, and entertaining characters he encounters. His cruise went from the Virgin Islands to Panama to the Pacific, with stops at the Galapagos Islands, the Marquesas, the Tuamotus, Tahiti, Fiji, and the New Hebrides, ending in Australia. Then, on land, he spent time in Lapland and Norway.

We’re introduced to the women he falls in love with, has children with, marries. Their stories are detailed with sensitivity and respect. Ultimately, Rockefeller ends up living in Camden, where his children grow up. He spends some years building boats and a Taube—an early design of airplane—and becomes one of the founders of Owls Head Transportation Museum. He continues to delight in Penobscot Bay boating, visits to the Only House and Cumberland Island, and life with his wife, Marilyn Moss.

When sailing, there’s an equilibrium you look to maintain, adjusting to changing wind speed and direction, and wave conditions, requiring attunement with the elements and flexible thinking. Might there be a parallel in navigating the relationships in a life’s voyage? Rockefeller describes some of the qualities he learned in childhood as “ingenuity for compromise, strongmindedness, intrigue, and friendship.” After 92 years, he feels he has proof that they provided “an excellent training ground for later life.” 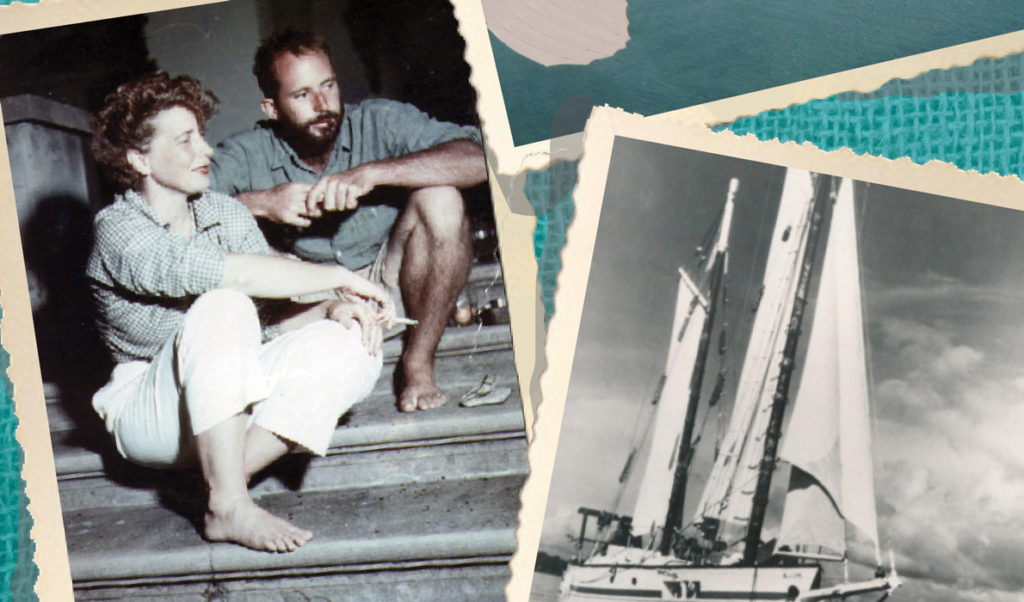