Born during World War II to a father who was in the Navy, Ralph Stevens moved at least ten times before graduating from Lincoln Academy in Newcastle. He dropped out of college and did various jobs, including deckhand on a tour boat in Boston, before following in his father’s footsteps and joining the U.S. Navy. He served for five years, without seeing combat, during the Vietnam War.

Stevens eventually settled in Seattle where he enrolled at the University of Washington, majoring in English and creative writing. Poet Madeline DeFrees introduced him to modern poetry even as she steered him away from the “neo-Keatsian verse” he had been writing. He eventually earned an M.A. and Ph.D. at UW. His dissertation was on British poet George Herbert (1593-1633) and his “grammar of devotion.”

You can hear echoes of Herbert in the poems in Stevens’s first collection, At Bunker Cove. In a number of pieces, the poet questions the routines of life from the standpoint of someone searching his soul. “The Fact of Darkness” reflects this perspective:

Look, I have seen the moon

shroud-white over the fields, heard

What more should I

see or hear, what facts

of ear or eye? The trees

around my house are winter

I am half sick of facts

that make no return.

When he is inspired by scripture, such as in the poems “The Road to Emmaus,” “The Lesson,” and “Waiting for the Bodies,” Stevens is more interested in the narrative possibilities of the gospel stories than what they might mean to him as a believer. Indeed, he doesn’t look upon them as religious poems in the usual sense, “meaning,” he explains in an email, “only that they are not praise, like Mary Oliver’s poems in Thirst, for example, or direct encounters with God, like the remarkable devotional poems of a [John] Donne or [Gerard Manley] Hopkins.”

In “The Road to Emmaus,” Stevens adapts the story in Luke of the travelers encountering a man they didn’t recognize as Jesus. He makes personal this via dolorosa. Sorrow in his world may begin on the road:

to collect a package from a friend

you haven’t seen in years,

or to your daughter’s wedding

where she leaves you for a man

Place is equally important to Stevens, in particular his adopted home of Little Cranberry Island, aka Islesford, where he has lived since 2005 and which supplies “a lot of the raw material” for his poems. Whether it’s a dog running by with a crab claw in its mouth (“The Whole of My Success”) or hearing voices in a cemetery “reading aloud/the inscriptions on the headstones” (“What We See Before It Gets Dark”), Stevens evokes his surroundings with eloquence. The title poem most directly evokes this northern island milieu where crows fly “angry laps around your house” and two gulls float unperturbed upon the water just off the beach. “Isn’t such rest, such/safety possible?” the poet asks.

“A place like [Islesford] gets into the blood and becomes a part of how I breathe,” Stevens explains. “Being in surroundings I deeply love and feel a part of, the way I have never been able to feel about cities,” he observes, “makes it almost a betrayal not to write, as if I were wasting a great gift.”

At Bunker Cove begins and ends with singing. The opening poem, “A World of Singers,” is an invitation to listen to a particular soundscape that features whistling, laughing, and a fox’s bark, but also “the sound trees make/after the wind stops” and the silence that follows an argument. It is no surprise the poem found its way to Garrison Keillor who read it on public radio’s The Writer’s Almanac on March 7.

The final poem, “Lyric, Sometimes Quiet,” returns to the opening theme, describing various sounds, including the “crazy arm” of a big maple that hummed “in the quiet violence of air” before breaking off in a storm.

The poem concludes with a list of “singing things,” including “the plaster of old walls cracking” and “the ploughman in the painting/dividing the earth without a sound,” an image that calls to mind Brueghel’s painting “The Fall of Icarus.”

What drives Stevens to write? Part of it is the discipline of work, part of it is language itself, “its beauties and its endless possibilities.” It goes deeper even than that: from childhood, Stevens relates, he has experienced poetry “as a sort of sacrament, the outward and visible sign of the inward and spiritual self.”

Stevens uses a line from Shakespeare’s Sonnet XXIX as his “gmail handle,” the note at the end of his emails: “…desiring this man’s art and that man’s scope….” Asked why, the poet explains that the words capture “the dilemma of being a writer who wants to be better, to have more art.” At Bunker Cove represents a sure and solid step toward solving that dilemma.

Carl Little has poems forthcoming in The Island Reader and 3 Nations Anthology. 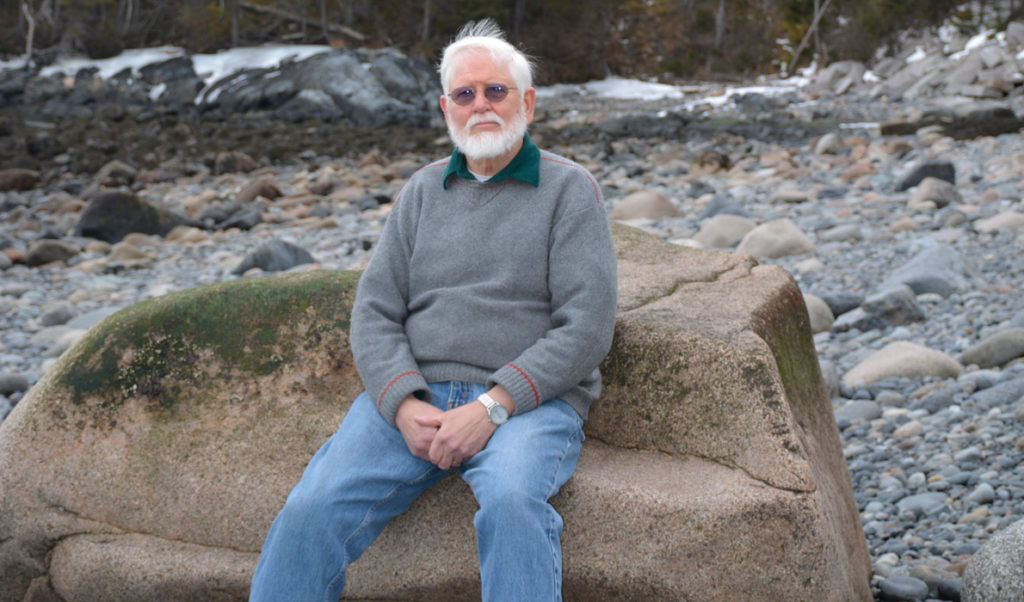