Toward the very end of Sarah Blake’s insightful novel, The Guest Book, one of the principal characters is collecting mussels on the shore of fictional Crockett’s Island, which lies just across a narrows from the real Vinalhaven.

“The tide sucked slowly backward as she worked. The lobstermen slowed through the Narrows, the day done, heading with their hauls into town. When she looked up, one of them waved. She lifted her arm in greeting, pushed her hat back off her forehead, and bent again into the water.”

The matriarch, Kitty, is the gracious, shrewd, plum upper-middle-class wife of midcentury America…

The character, Evie, is a history professor pushing age 60, and her family, the Miltons, own the island. The book covers the family’s history from the 1930s to the present, and the island is the central setting of the story and the characters’ inner lives.

The lobsterman waving from his boat is just about the closest encounter we have with local people in this story. A fleeting glimpse, early on, through the eyes of the Rockland harbormaster’s wife of the Miltons arriving from New York on their way to discovering the forlorn island with its forlorn “FOR SALE—R. CROCKETT” sign is the most we know of any locals. The Miltons know as little about them as they know about what goes on at the island.

This seems pretty true to life, like most of story, whose setting and milieu the author once told an interviewer she knows firsthand.

The Miltons are a wealthy New York family whose connections extend to the top echelons of power and influence. The patriarch, Ogden, is a successful New York financier, with deep ties in Europe. The matriarch, Kitty, is the gracious, shrewd, plum upper-middle-class wife of midcentury America, who could be descended from an Edith Wharton novel.

In 1936 they buy the island on something like a whim, and in the ensuing decades it becomes a summer haven for family and friends. The story is about the complications inside the haven.

In the turbulent 1930s, Ogden makes a troubling financial decision in Nazi Germany, and in connection with this, Kitty 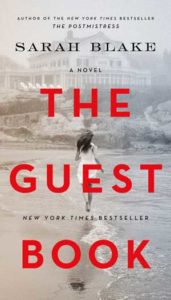 makes a decision at home which she will deeply regret later. How could they have known what was to follow? Ogden’s firm becomes a powerful geo-financial player, who is principled and well-intentioned; he gives heartfelt speeches about responsibility and duty to family, country, and humanity. Similarly, Kitty keeps her own strict code of responsibility and duty to home, husband, and society.

As their three surviving children come of age after World War II, cracks in the order Ogden and Kitty so cherish begin to appear. A son, “Moss,” becomes caught up in the artistic and cultural ferment of 1950s New York, to the neglect of his family responsibilities. One of the daughters, Joan, in a sign of the time, crashes hopelessly into love with a young Jewish man, Len. The possibility, however, of a Jew coming into the Milton family is a serious, unspoken complication. Especially given the Miltons’ troubling connections to Nazi Germany.

One of Moss’s Greenwich Village friends is a young black writer-photographer, Reg Pauling, whose degree from Harvard is a shocking credential Moss can use to introduce him to the Miltons’ social world. Reg, well aware of the racism latent there, resists Moss’s idealistic desire to break him in. To complicate matters further, Reg and Len have been friends since childhood. It’s a recipe for social disaster, and worse.

By the 2010s, the children and grandchildren have let many of the family responsibilities slide. The trust fund that keeps up the island is running out of money. They debate among themselves how to keep the island, or at least a stake in it, for the remaining family.

For those of us who do not frequent privately owned islands, there is some irony in what constitutes “running out of money.” For while the story centers on important themes of race and class frictions, the Miltons at the same time barely notice the middle and working classes all around them. One wonders what Rockland poet Leo Connellan made of people like the Miltons while growing up in hardscrabble Lime City in the 1930s and ’40s. The story does not go anywhere near there.

Crockett’s Island is a bubble where the Miltons throw parties, gather mussels, grapple (eventually) with their long, complex history of racism and phantom notions of noblesse oblige, and play out their dramas summer after summer. With hardly a glance at what has become, especially over the last few incendiary years, Trump country.

At the end of the book, Reg, now a very old man, makes two extraordinarily magnanimous gestures to Evie, the history professor. It is a sincerely touching moment, in a book with many touching moments. But somehow, none of it will put anything right. “‘We vanish,’” is Evie’s final plaintive thought.

And I’m thinking: Not really. Wealthy people will still be making their way from the dock and up the lawn to that huge old house, not noticing the locals noticing. The Miltons may relinquish the island and fade out, but the wealthy, and the trouble, won’t.

The Guest Book is vividly written, insightful, and at points moving on the passions and shortcomings of otherwise well-meaning people on those private islands.