However dimmed, deferred, or deleted by the coronavirus, Maine’s bicentennial marches on. The milestone is providing an opportunity to claim pride and/or acknowledge failings in our history, to draw lessons from our past, to highlight the ups and downs and in-betweens.

For journalist-historian Earl Brechlin, the 200th birthday is also an excuse to have fun.

Wild! Weird! Wonderful! Maine (Islandport Press, paperback, $16.95), Brechlin’s latest Baedeker, offers a highly engaging scan of some of the quirkier, out-of-the-ordinary, and lesser-known facets of Maine’s story. As the author puts it in his introduction, “The subjects in this book are a cross between affectionate history, a homespun version of Ripley’s Believe It or Not!, and a collection of myths, legends, and truths shared for decades around hearths, campfires, and potbelly stoves.”

The book is arranged geographically, starting with the Western Mountains, then heading north, then Downeast, ending in Southern Maine via the Midcoast—not your usual itinerary for covering the state.

Brechlin has thoughtfully included Maine Atlas coordinates for anyone setting out to find, say, the ghost town in Mariaville Falls Preserve (now managed by Frenchman Bay Conservancy), the Maine Civilian Conservation Corps Memorial outside the Maine State Museum in Augusta, or the Bumpus Quarry in a former potato field in Albany Township near Bethel “where the largest single crystal of beryl was discovered by Harry Bumpus while mining feldspar in 1928.”

He also provides helpful pointers for avoiding arrest for trespassing; some of the out-of-the-way places in the book are on private land.

Each section includes “Maine Rest Stops” where Brechlin spotlights some element of Maine, from covered bridges and railroads to record-breaking (sometimes worthy of Guinness) accomplishments and “Lobster Lore.” In the latter, you’ll discover that the noble crustacean can be right-handed or left-handed, “meaning some have the large crusher on the left, some on the right.”

Another “rest stop” titled “Satan in the Woods & the Deep Blue Sea” highlights Mainers’ fascination with the devil as evidenced by wonderfully creative place names (Hell Before Breakfast Cove). Elsewhere, “Things That Go Bump, or Howl, in the Night” offers a round-up of mythical creature sightings, including the Basin Screecher in Phippsburg.

Scattered throughout the book are capsule descriptions of some of Maine’s intriguing residents, among them Wilhelm Reich, whose stone observatory “Organon” in Rangeley serves as a memorial to the controversial scientist and psychoanalyst, and Gunnar Hansen, the Iceland native and Northeast Harbor resident who played Leatherface in The Texas Chainsaw Massacre. As Brechlin points out, in real life Hansen was a beloved soft-spoken community member who loved history.

Brechlin sometimes ties the past to the present. In the entry “Presidential ‘Fake News’ Circa 1912,” a doctored photograph shows Teddy Roosevelt riding a bull moose across a lake. What isn’t false is the 26th president’s well-known fondness for northern Maine.

A former newspaper editor and currently communications director for Friends of Acadia, Brechlin knows how to write succinctly, but also how to set the hook. “Giant Pan Brings Home the Bacon,” about what is claimed to be the world’s largest non-sticking frying pan located in Pittsfield, begs to be read. And there’s a bonus: a photograph of the pan being used during the town’s annual Central Maine Egg Festival.

Brechlin dedicates Wild! Weird! Wonderful! Maine to “all historians, private and professional, working alone or within groups and societies, and through libraries and educational institutions, to discover, uncover, rescue, protect, and preserve the artifacts, stories, and traditions of this incredible state.”

The author numbers among that dedicated cohort, owed a debt of gratitude for helping to bring Maine’s history alive.

Carl Little writes about art and literature in several publications and his own books. He lives in Mount Desert. 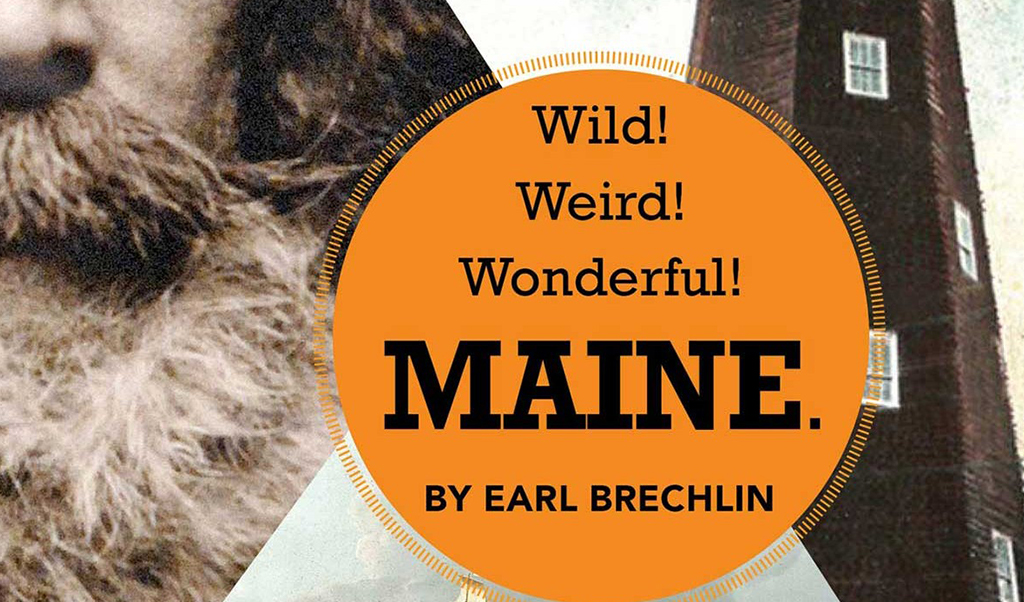