The number of people and pets with Lyme disease increase yearly. Maine is among the top 15 states with the highest rates of the disease. Coastal and southern communities have been hit hardest, and some have taken drastic measures to reduce ticks and their diseases, including culling deer.

But culling deer, while highly effective at controlling tick-borne disease, is controversial. Many communities refuse to do it, leaving them to come up with alternatives, with varying degrees of success.

A potential new tool in the fight against tick-borne diseases is being developed by a Massachusetts Institute of Technology scientist and his team, but it, too is not without controversy and it may take a decade before it’s available.

By altering the genes of mice, they plan to create mice that are immune to the bacteria that causes Lyme disease or to the ticks themselves, making the mice immune to not just Lyme disease but other diseases carried by ticks.

Their solution will not eradicate Lyme disease or other tick-borne diseases—other animals, such as chipmunks and birds, can spread tick diseases. But by targeting white-footed mice, which are said to infect up to 95 percent of ticks that feed on them, potentially they would markedly reduce the incidence of Lyme disease and other tick-borne diseases.

Ticks become infected with the pathogens that cause diseases such as Lyme and babesiosis when they feed off small animals, such as mice, carrying those pathogens.

Two island communities in Massachusetts with big tick problems—Martha’s Vineyard and Nantucket—have agreed to work with Esvelt and his team on the project they’re calling Mice Against Ticks.

“We do get a lot of that initial freak out, but once they sit down and they listen to Kevin’s speech, and they hear the presentation, they’re actually pretty on-board with it,” he said.

Esvelt made a number of presentations to each island detailing the research and the options available. He and his team offered to alter mouse genetics so that they can be immune to the bacteria causing Lyme disease, immune to ticks, or both. Each island community chose the do-both option.

Getting altered mice to Nantucket and Martha’s Vineyard is a multilayered process that will take a number of years. Each step of the project is being monitored and evaluated by an independent board. And before the gene-altered mice can be released, the project must go through state, federal, and local approval processes.

The MIT team has been working on the gene editing in the lab for about a year. Esvelt estimates it will take about three-and-a-half years before field testing on an unpopulated island begins. It may be about seven years before altered mice are released on Martha’s Vineyard and Nantucket, and that release is dependent on the residents of those islands voting for it in their respective town meetings.

Island communities in Maine are gradually hearing about Esvelt’s project and are intrigued but aren’t clamoring for it—at least not yet.

Linda Gillies, secretary of Islesboro’s Tick-borne Disease Prevention Committee, has read about Esvelt’s research and thinks the work he’s doing is “important and interesting,” but it doesn’t seem like a feasible solution for Islesboro. “I don’t read this and say Oh! There we go,” she said.

From her perspective, she sees at least three drawbacks: only white-footed mice are targeted in the project but there are other critters that still carry infected ticks; it’ll be a good ten years before altered mice are ready for release on inhabited islands; and it’s costly.

Esvelt estimates that the Nantucket and Martha’s Vineyard projects will cost in the millions of dollars per island. Funding is coming from MIT and philanthropic giving. “We would love to make this cost effective for many more people and to make it available on the mainland,” Esvelt said.

Scaling the gene-altering project for the mainland is another nut to crack, though.

Releasing the altered mice on islands is advantageous because the mouse population is contained. On islands, the scientists can release enough altered mice to overwhelm the native population and create a stable population of immune mice.

Because mice reproduce so quickly, it will only take a couple of years to see if the project works as predicted with fewer infected ticks and a drastic reduction, if not near-elimination, in humans becoming infected with tick-borne diseases on the islands.

On the mainland, though, scientists could not release enough altered mice to overcome the natives. To spread the altered genes to mice on the mainland, scientists would need to include a gene drive in the gene engineering process.

A gene drive allows the altered genes to be inherited more quickly. Instead of potentially taking centuries to be inherited, the genetic changes in the mice would take place in a handful of generations.

Gene drives can spread altered genes in a species indefinitely, including far beyond the geographic location scientists are working in. To keep gene drives from spreading altered genes where they aren’t wanted, Esvelt and his team are developing a daisy drive—a system of genetic control that would, in theory, keep the changes from moving out into the wider environment. Gene drives are not part of the Nantucket and Martha’s Vineyard projects.

“On some level I understand why people are exploring this option, but the flip side of it is there are already existing technologies that are in place that would do essentially the same thing without genetically altering the mice,” said Chuck Lubelczyk, a field biologist at Maine Medical Center Research Institute’s Lyme and Vector-Borne Disease Laboratory in Scarborough.

Technologies such as tick tubes and bait boxes also disrupt the transmission of infection between mice and ticks, he noted, plus they are affordable, currently approved by the state and available for use right now, he said.

“It’s very hip and sexy to be talking about gene editing,” he said, but we should think carefully before using this new technology.

As gene editing tools become more and more mainstream, the debate rages on about the ethics of using such tools. They do, after all, have the ability to fundamentally alter organisms and whole ecosystems. For many people, that’s an unnerving prospect. As anyone who has ever read or watched sci-fi books and movies knows, tinkering with nature rarely turns out well.

But Esvelt points out that humans have been tinkering with nature for millennia. Instead of taking the shorter route using gene editing, he could utilize the tried-and-true breeding techniques used to get us such familiar companions as poodles and border collies.

We can find the roots of our unease with gene editing in our relationship with nature and in a fear of unintended consequences, said Frank Chessa, director of clinical ethics at Maine Medical Center and assistant professor of medicine at Tufts University.

When using new technologies like gene editing tools and gene drives that can fundamentally alter the natural world, he said, there’s a concern we’re engineering the wild out of existence. “This will be a little bit crass sounding, but at some point, do we engineer it so much that it’s like walking into Disney World rather than walking into a real wilderness?”

And then there’s the sci-fi scenario we’re all familiar with: when something begins cautiously, with the best of intentions, but somehow gets out of control. He’s sympathetic to the argument of not opening Pandora’s box, he said, “but is that a reason not to introduce any new technology? I’m not so sure.”

Esvelt is intensely aware of the ethical considerations of his work and that’s why he’s approached it in a distinctly different way from nearly all other scientific research projects.

The Nantucket and Martha’s Vineyard projects are partnerships between those island communities and the scientists at MIT. Each island has its own steering committee working with the MIT team.

“These committees are essentially in charge of the project,” Esvelt said. “If they say it’s over, then it’s over. We walk away.”

However, if other communities reach out to Esvelt and his team to say they’re interested in pursuing the research, the MIT team would be willing to work with those communities.

They are also asking the general public—not just residents of Nantucket and Martha’s Vineyard—to weigh in on the work they’re doing.

“Because I do hold myself morally responsible for all of the consequences of my work,” he said, “I want to invite everybody to tell me what they think, what they’re worried about, what might go wrong, so we can check that.”

And that’s already happened. Someone at a Nantucket meeting brought up a question the scientists hadn’t considered. They researched the issue and then incorporated the results into their models.

“I would rather be proven wrong than unknowingly do wrong,” he said.

Go to https://www.responsivescience.org to learn more about the Mice Against Ticks project. Communities that have questions or ideas about the research or who are interested in launching a project here like Nantucket’s and Martha’s Vineyard’s can contact Esvelt directly at kesvelt@mit.edu. 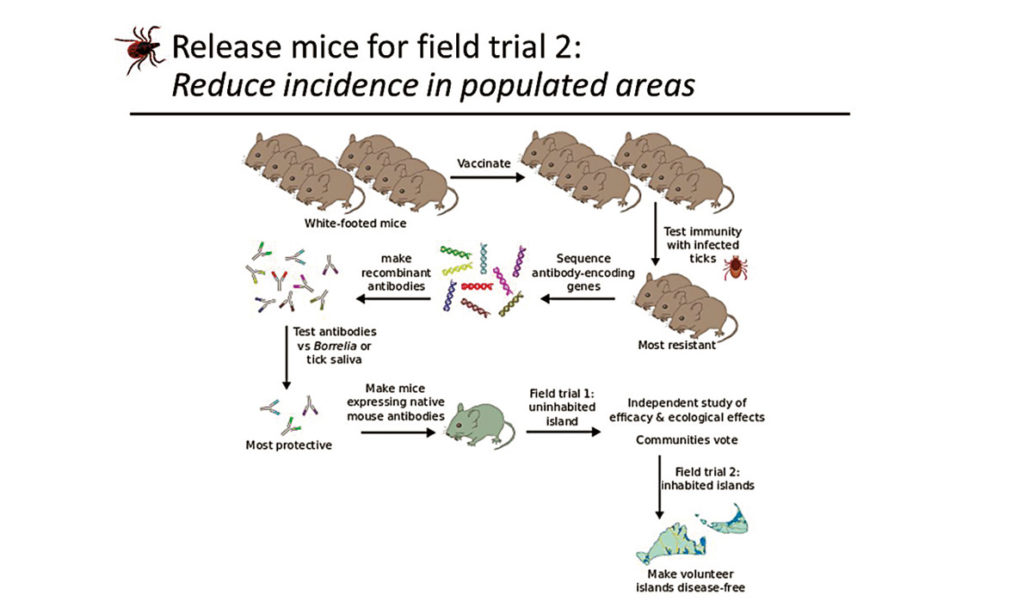