The late Andrew Wyeth, one of America’s most famous artists, is well-known for his Maine paintings of people and scenes from Port Clyde to Cushing. He is less known for Rockland paintings, but they exist and are on display through February at the Farnsworth Art Museum.

A panel of four Rockland Historical Society members, experts on different aspects of Rockland history, assembled on Jan. 10 to kick off the show of Wyeth’s Rockland work with a discussion on the subjects and their significance to the area.

“Wyeth in Rockland” features 18 watercolors, 15 never before exhibited, painted by Wyeth between 1940 and 1998. The panel was moderated by show curator Leith MacDonald of the Wyeth Study Center. The show represents a collaboration between the center, the museum, and the historical society.

The idea for the show began with a 1958 watercolor called “400 Limerock,” gulls perched on a Limerock Street fence not far from the Farnsworth, which sparked the curiosity of the center’s staff. Further research unearthed pencil drawings, more watercolors, and tempera paintings.

Limerock, of course, reflects the importance of the lime industry to Rockland—which was almost named Limestone when it separated from South Thomaston in the 1850s—and surrounding coastal towns. Panelist David Hoch was the last president of the Rockland-Rockport Lime Company.

“Lime is the most prevalent mineral on earth,” said Hoch. “You can’t make steel or paper without it.”

The vein that runs from Thomaston to Camden is unusually deep, rather than shallow and horizontal, and near the water for easy shipping. Discovered in 1733, local lime holds together the bricks of Boston and New York buildings, and plastered many of the walls.

The art works launched memories and tales of the harbor, the lime industry, the war years, and the Farnsworth itself. Capt. Dave Sewlin credits the museum with his long career as a ship captain.

The Farnsworth opened in 1948, and the Marine Room drew the 9-year-old Sewlin, who decided then and there he would captain big ships. During junior high school, he had to walk home from school because he’d been kicked off the bus, affording him the opportunity to stop at the museum every day.

“I thought every town had a Farnsworth,” said Sewlin. “I would look at the exhibits in the same order every day. God bless Buddy Wood for throwing me off the bus, so I could stop in that room and dream.”

Paul “Gil” Merriam, Rockland native, retired professor, and author of several books on Rockland history, said he attended the Farnsworth opening with his parents when he was 13.

Merriam recalled many ships from all over did sea trials using the lights on North Shore Drive in Owls Head. Before the U.S. Coast Guard took it over, Rockland’s Tillson Avenue site was a U.S. Navy base.

“There were aircraft carriers, cruisers, destroyers, battleships,” said Merriam, who would see them when he was swimming on Dick’s Beach in Owls Head as a child. “The wake they generated was huge.”

Sailors from all over were also attracted to a certain section of Rockland for other reasons, he added, alluding to illegal liasons.

Panelists recalled the war years when the shipyards switched to military work, which residents were not allowed to view. Only one photographer was allowed to document the work, but the pictures could not be shown until after the war.

Wyeth’s Rockland works include paintings of houses such as the “Williams House” (1940), ships including “The Sophia” (1951), the “North End Shipyard,” “Chickawaukie Lookout” (1949), views of the harbor, as well as the Rockland lighthouse. Some of the locations are now on the National Register of Historic Places, and some are gone, such as 400 Limerock, which is now part of the transfer station. 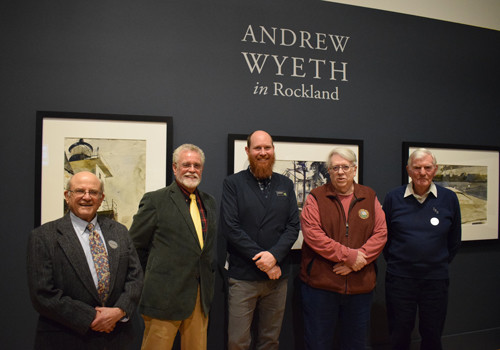 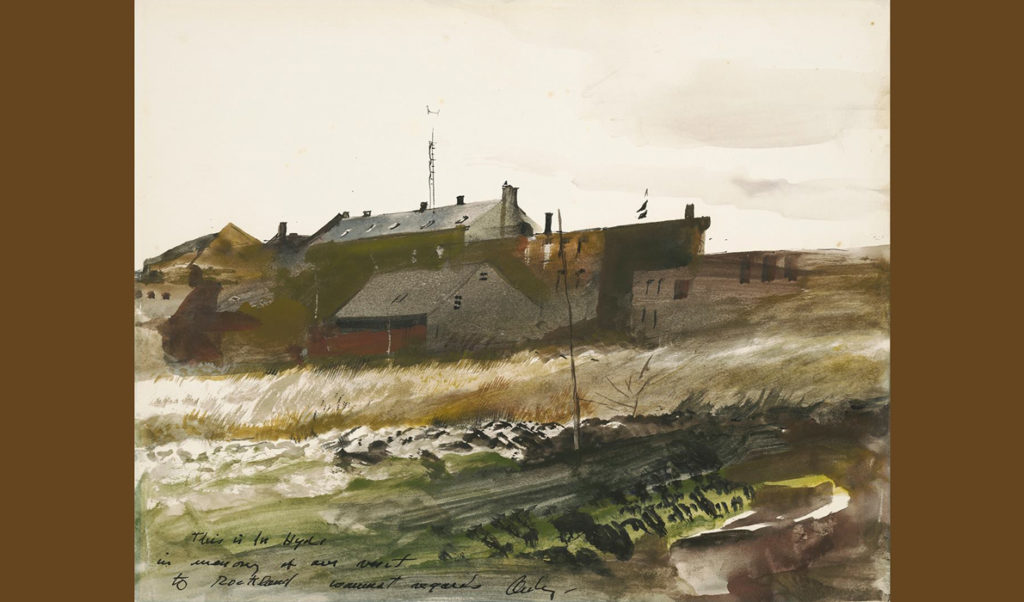 An early watercolor of a Rockland scene