It’s high summer on the coast of Maine, and the state’s newspapers are reflecting the splendor of the season. But it’s not all pretty pictures and fun; the news marches on, and some of it has serious consequences.

Let’s start with the splendor, though.

The Ellsworth American reported on a relatively new phenomenon among the lobster fishing fleet. It seems more and more fishermen are taking a moment away from hauling and baiting to capture the beauty they see from their boats. The spectacular images they are photographing—often at hours when most of us are still asleep—are being shared on Instagram, and people are paying attention.

“Those sunrises and sunsets are like God’s paintbrush,” said Robin Dunham, 58, a career lobsterman, according to the newspaper.

Isaac Dworsky, 31, who’s been out on boats off Stonington since he was three, also has been busy shooting.

The work of six fishermen from the Stonington area are included in an exhibit at the Kingman Gallery on Deer Isle.

There was another, more practical development in the lobstering world in early July. A shortage of herring, which is a preferred bait for the fishery, has led Maine marine resources regulators to consider an emergency rule change to allow more of the fish to be landed.

“Regulators and members of the fishing industry say the problem is that not enough herring are being caught on Georges Bank off Massachusetts,” according to reports.

Several Maine news outlets have produced stories and on-location reporting in Acadia National Park to mark the 100th anniversary of its designation as a national monument. Park status came later.

One bit of breaking news related to the park is L.L. Bean’s pledge to donate $1 million to the Friends of Acadia group to help keep the Island Explorer bus system operating.

According to statement from L.L. Bean, the fare-free buses have carried more than six million passengers since 1999, “reduced private vehicle trips by about two million, and reduced pollution on Mount Desert Island. With the new donation, L.L. Bean has now donated and pledged more than $4 million” to the park and its support systems.

And a personal donation: David Shaw, founder of Idexx Laboratories, is giving $1 million toward an Acadia science initiative. The funds will underwrite programs offered by the National Park Service, Schoodic Institute at Acadia National Park and the American Association for the Advancement of Science. Shaw said the project will allow parks to offer more opportunities for scientific research and education.

We’ve reported on the browntail moth’s impact on island and coastal forests, particularly in the Midcoast, but the critter’s caterpillar stage also brings problems. The Kennebunkport Conservation Trust “is making people aware of a browntail moth infestation on Vaughn’s Island,” off Cape Porpoise Harbor, “and asking visitors to avoid the harbor side of the island,” according to the York County Coast Star.

The caterpillar’s hairs “can cause a very severe allergic reaction, similar to poison ivy, even after they molt,” the land trust noted, and asked visitors not to touch the caterpillars. Vaughn’s Island is located off Cape Porpoise Harbor.

“It’s like poison ivy, where some people react and some people don’t,” said Maine Forest Service entomologist Charlene Donahue. “And the rash is actually similar to a poison ivy rash.”

It won’t affect next year’s Fourth of July celebration, but the town of Deer Isle approved in a special meeting vote a ban on fireworks on June 16, according to the Island Ad-Vantages newspaper.

Seacoast Online reports that the seawall in Wells will see $60,000 in repairs after damage from storms and high seas last winter.

“The town hired an engineer to inspect the wall,” the website reports, “and learned that there is lots of cracking and the cap system needs to be replaced.”

“It wasn’t a real bad winter snow-wise,” said Town Manager Jonathan Carter, “but storm-wise, we had some damaging high seas.”

White’s Island off Bradbury Cove in Wiscasset could soon be open for the public to enjoy, the Wiscasset Newspaper reports, but “the only way to reach it will be by boat. Two wooden footbridges leading to the island are closed because they’re unsafe to cross.”

Maine Coast Heritage Trust purchased the island and offered it to the town on the condition it be kept in its natural state and open to the public for daytime, low-impact recreational use, the paper reports.

“The island has a number of shade trees and is over an acre,” and is located a short distance west of the Wiscasset Yacht Club. “It has been privately owned for over 150 years, although for decades the town has maintained a right-of-way to and across it that includes a dirt causeway and the footbridges. The bridges were closed five years ago following concerns about their safety.”

A paper mill near the coast Downeast is facing new challenges, the Quoddy Tides newspaper reports: “New water quality standards proposed by the federal government for the St. Croix River could cost the Woodland Pulp mill millions of dollars and also could affect a number of communities … that discharge wastewater into the river.”

And something for the Downeast region to look forward to next year: “For seven days next September, some 400 cyclists and accompanying support personnel will ride The Bold Coast, from Winter Harbor to Eastport and back again, the Bicycle Coalition of Maine announced,” according to the Machias Valley News Observer. 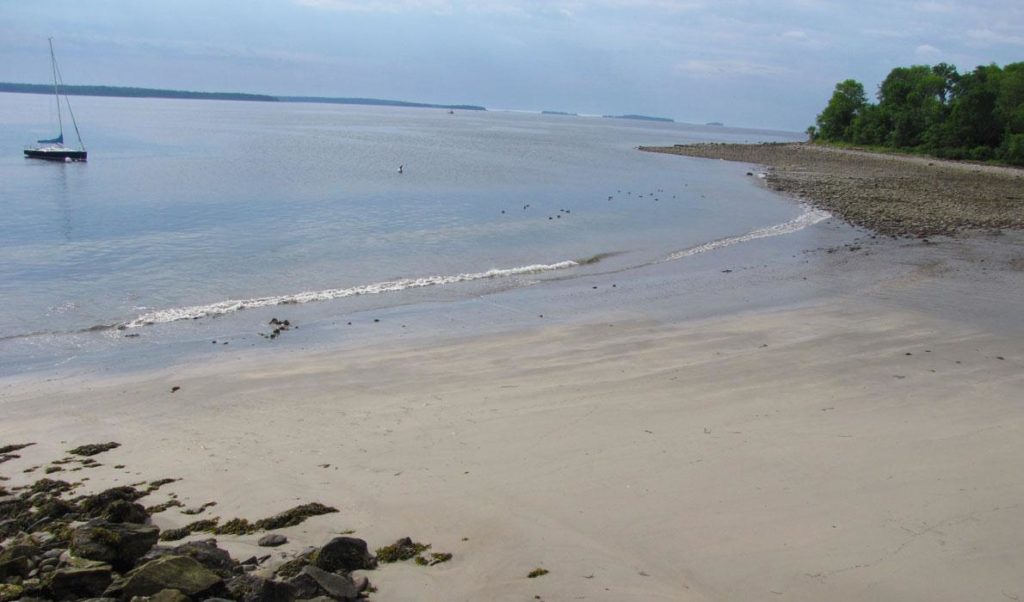