My spring to-do list emerges as the snow and ice retreat in my yard this time of year. Gone are the excuses that sub-freezing air and snow cover provided for my home- and yard-improvement projects.

Given Maine’s short construction season, it seems the same urgency is at play along the coast this early spring, as there has been a flurry of waterfront-related news in recent weeks. What follows are a few of the headlines that caught my eye.

Seaweed harvesting along the coast has generated conflict in recent years, with environmental advocates arguing that the amount of vegetation cut and removed is unsustainable, and threatening marine nurseries for such important species as lobster.

Somewhat outside the environmental question is whether harvesters have the right to take the seaweed—mostly rockweed—between the low- and high-tide marks. A lawsuit was filed against Acadian Seaplants, a Canadian company that buys seaweed harvested on the Maine coast, and in 2017, a court in Washington County ruled that vegetation in the intertidal zone was owned by the shore-side landowners, and so they could block access for harvesters.

The case was appealed to Maine’s Supreme Judicial Court, and, as the Portland Press Heraldreported, the high court upheld the lower court ruling.

“We agree that rockweed in the intertidal zone belongs to the upland property owner and therefore is not public property, is not held in trust by the state for public use, and cannot be harvested by members of the public as a matter of right,” Justice Jeffrey Hjelm wrote in the majority opinion.

The Department of Marine Resources is reviewing the matter to see if new regulations are needed.

New Department of Transportation Commissioner Bruce Van Note wrote to members of the Ferry Service Advisory Board on March 27, outlining his plan for revamping—yet again—ferry fares. The proposal calls for raising an additional 17 percent in revenue, to be achieved through hiking adult round-trip fares from $11 to $13, and fees for vehicles under 20-feet-long from $30 to $35, among other increases.

The proposal will work its way through the public review and input process, including a hearing beginning at 10 a.m. on April 24 at the Hutchinson Center in Belfast.

As The Working Waterfront reported last month, many residents of Peaks Island have opposed plans by Casco Bay Lines to build a new ferry capable of carrying 200 more passengers. Those opponents felt CBL’s board was turning a deaf ear to their views, but in late March, it voted to delay a decision on the specifications for the new boat.

Peaks residents worry their island will see even more visitors clogging roads and straining services during the summer months.

The Maine Coastal Program, part of the state Department of Marine Resources, has received a federal grant of more than $200,000 from the National Oceanic and Atmospheric Administration that it plans to use to hire a consultant to study the impacts of sea level rise.

The ongoing effort to protect working waterfront access to Boothbay Harbor’s East Side got a big boost with the news that seafood restaurant chain Luke’s Lobster would operate a buying station at the Sea Pier.

The company is partnering with the Boothbay Region Maritime Foundation, a recently formed nonprofit that purchased the pier, which had been owned by longtime fisherman Douglas Carter, who wanted to ensure he sold the property to an entity that would keep it as a commercial fishing wharf.

Acadia National Park released its long-awaited transportation plan in late March. Among its recommendations, which would be implemented over a period of years, is a “timed-entry” reservation system that would give visitors a specific window to enter the park as a way to ease summer congestion.

It also calls for the eventual elimination of right-lane parking along the Park Loop Road, additional parking at Hulls Cove next to the park’s visitor center, which would be relocated on site, and removal of visitor services at the Thompson Island Information Center.

In other Mount Desert Island news, the Canadian Broadcast Company reports that the province of Nova Scotia will pay $8.5 million to renovate Bar Harbor’s ferry terminal. The work now is estimated to cost $3.5 million more than originally thought.

The work includes “fixing the dock and transferring a floating loading ramp from Portland,” CBC reports.

An industrial area on Rockland’s waterfront, which has slowly begun transitioning to mixed-use development, could see a major new project in the former Bicknell building. 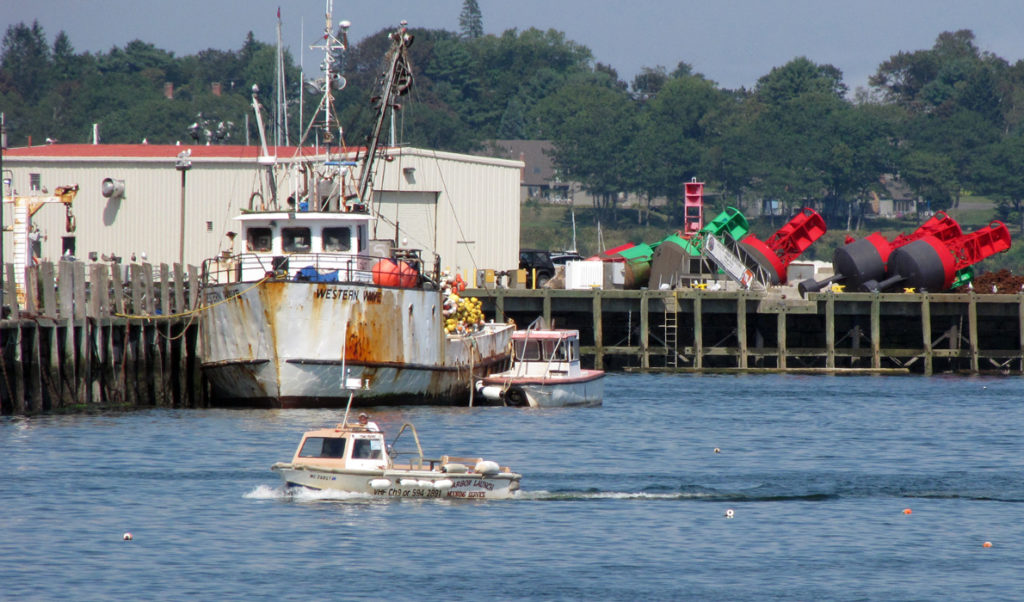