It’s nearly impossible to disagree about anything of consequence when settled comfortably near a companionable wood fire.

We live in a big three-story house right in the village. It was built around 1850 as a Greek Revival—but without the pilasters. Not long after, a two-story kitchen wing was added on the north side, 16 feet in that direction by 13 feet wide and a single story garage beyond that.

The house is not terribly drafty but is hardly economical and we are remiss in not doing our part to conserve energy by finding some place a little more resourceful for only two people—something without ten rooms and a full cellar and full attic. But we love it too much to find a place that would perhaps make more sense.

It has a two-pipe (enclosed) steam heat system and, while we did have a more efficient boiler installed a couple of years ago and have installed storm windows and doors, we haven’t made many other accommodations except for the wood stove.

The avenues of most heat from the furnace are straight up from the four first-floor rooms to the four on the second floor, but the kitchen wing is a little farther removed from the fundamental structure and its radiator is at the end of the only horizontal run. Left on and cranked up, the radiator can make the kitchen comfortable but the furnace has to work at it.

Back in the early 1990s we installed a Monitor against the kitchen’s north wall to lessen the demands on the old furnace. It did the trick and gave the dog something nice to lie down in front of but it was otherwise impersonal and—given its function—kind of cold.

A few years ago we sacrificed half the garage by extending the kitchen to become 20 feet long, added a chimney, installed a lovely Vermont Castings Intrepid wood stove and turned the remaining six feet of garage into a woodshed, readily accessible, three steps down, via a door just to the left of the hearth.

The wood is delivered in the late spring and over the next month or so I stack it away in the woodshed.  Two wrought-iron wood racks sit either side of the wood stove and to the right further is an old copper basin tub filled with kindling and starter material.

In early October the first fire of the season is lit and as the cold settles in over the next couple of months, the wood is consumed from the right rack and as fast as that happens, Elaine replenishes it with wood from the left.  When the rack on the left is empty, every other day at this time of year, I fill it with wood from the shed. I usually do this in the morning, long before she wakes because it requires that I position the wheeled rack in the open doorway—letting cold in—while I split some kindling and a few unruly pieces of firewood and load the rack. Then I start the fire, and bring her a nice cup of hot coffee.

Then the stove and we begin a crackling and companionable day, one or another of us now and then purposely in its insatiable proximity to feed it or ourselves. By evening, whatever among the many things that occupied us during the day are done with and we settle in the kitchen to prepare dinner and to consume it, seated at a little table five feet from the fire and inescapably agreeable as Valentine’s approaches. 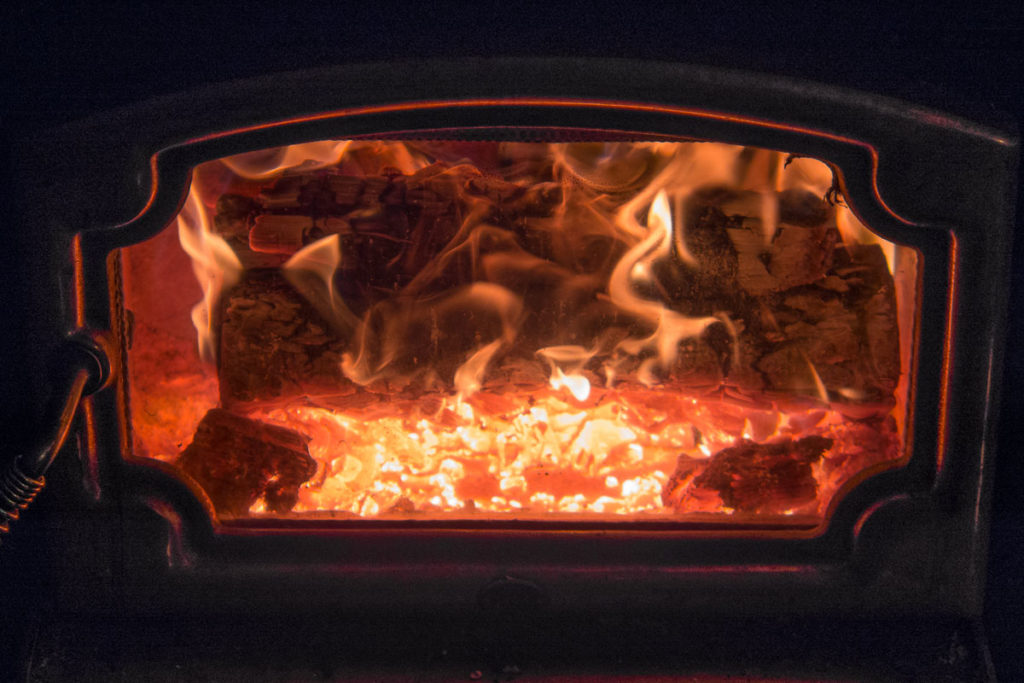