BATH — Women are invited to join a group of other volunteers at Maine’s First Ship’s waterfront boatshed on Sunday, Nov. 8, for the second annual Women’s Shipbuilding Day. Maine’s First Ship is building Virginia, a reconstruction of the first ship built by English colonists in 1607 at the mouth of the Kennebec.

While the original was built entirely by men, those involved with Virginia these days are looking to provide more opportunities for women to build the ship.

“We had our first Women’s Shipbuilding Day last year,” said MFS Volunteer Coordinator Jeremy Blaiklock of Arrowsic. “It was a great way to introduce them to the project in a low key, supportive environment.”

Shipwright Rob Stevens of Woolwich likes to tell visitors that Gail Smith, a participant in last year’s event, “is our best volunteer, but don’t tell the guys that.” This means showing up on Wednesdays and Saturdays throughout the year to help build the ship. Smith, a retired EMT, hails from Topsham.

Participants can expect a brief presentation on the background of Virginia and the colonists who built her. The colony, named Fort St. George, was located on what is now Fort Baldwin in Popham. Operating under the same royal charter as the colony at Jamestown, the Maine settlement lasted only one year, but the settlers built a ship designed for coastal exploration and trade. When the colony folded, Virginia crossed the Atlantic to England, and then made at least one trip to re-supply Jamestown in 1609.

The rest of the day will be spent working on today’s Virginia, a 51-foot pinnace. Currently, volunteers are in the final stages of “fairing” the frames in anticipation of hanging the first planks, which will happen sometime before the snow flies. Other work includes shaping one of the many spars needed to sail the ship Participants should come expecting to use hand and power tools, which will be provided.

Maine’s First Ship volunteers say Virginia is half done at this point, and once she is finished and launched, they hope to offer her for educational and environmental programs, as well as for visitors from near and far to board her and learn about Maine’s 400-year-old tradition of shipbuilding.

“We’re excited about doing this again,” said Stevens. “It’s a great day and we hope all who are interested in what building a boat is like will spend the day with us.”

Maine’s First Ship is located on the river side of the Bath Freight Shed on Commercial Street in Bath, just north of the Route 1 Sagadahoc Bridge. For more information, contact Orman Hines at 389-2419. 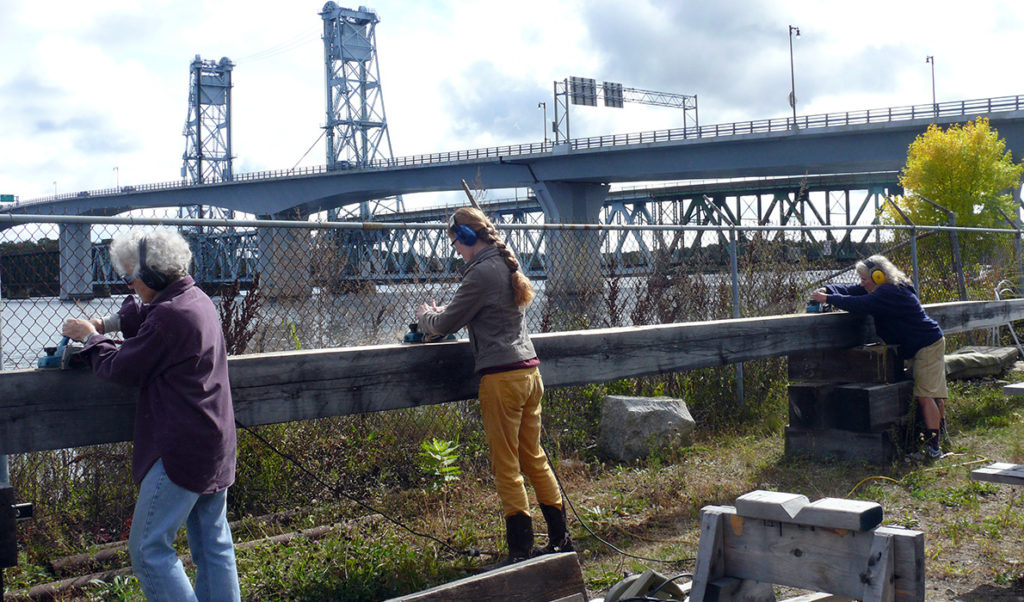 Women work on the Virginia.