I read with interest the Fathoming column in the June issue of The Working Waterfront (“Signs of spring in our rivers and bays”) about the resurgence of fish migrations in the rivers and bays of the coast of Maine. I think it is very exciting that these populations are recovering—a hopeful sign in a darkening ecological world.

I do agree that the return of the Chesapeake Bay striped bass has been a wonderful accomplishment, but we need to always remember that these fish have a tenuous hold on survival in one of the most polluted estuaries in America. And the Hudson River population has to contend with ongoing PCB pollution, making them unfit to eat.

With these two shaky populations as the shaky base for ecological recovery, I have long wondered why no effort has been put into restoring the breeding populations of the Gulf of Maine. When colonists came to New England—and the Gulf of Maine in particular—the spectacular fish runs they wrote home about were the striped bass, not salmon.

It is doubtful that Atlantic salmon ever ran in the style of its Pacific cousins. Granted, there were many more in the past than now, but fish restoration advocates have been looking at the wrong model. The striped bass were the “wall to wall” fish talked about in early accounts.

Striped bass had the unfortunate—for them—habit of coming in with the tide, spawning at the head of tide, and returning to open water. They did not continue upriver. Our colonial ancestors cashed in on this and would net off the river mouths and trap all the fish on a falling tide.

This devastation soon removed all the fish—to the point where Bigelow & Schroeder in The Fishes of the Gulf of Maine declared that striped bass had never spawned in the Gulf of Maine. Some spawning persisted through the 1860s, but most had ended by the War of 1812, but not without a fight by local people who sought regulation to prevent the destruction of this valuable resource.

All this background is to suggest that perhaps an effort should be made to restore the Gulf of Maine’s true “glory fish,” the striped bass (morone saxitilis). There are still spawning populations in the Gulf of St. Lawrence that might provide stock of a northern origin; or, with the warming climate in mind, a southern stock base might be more appropriate.

Stripers have proven extremely easy to transplant and establish. Many reservoirs across the U.S. support a sport fishery of stripers; the fish are even in San Francisco Bay, screwing up the ecology of that body of water.

We have forgotten that striped bass are a Gulf of Maine native. Let’s bring them back, along with their natural prey, the alewives and river herring. 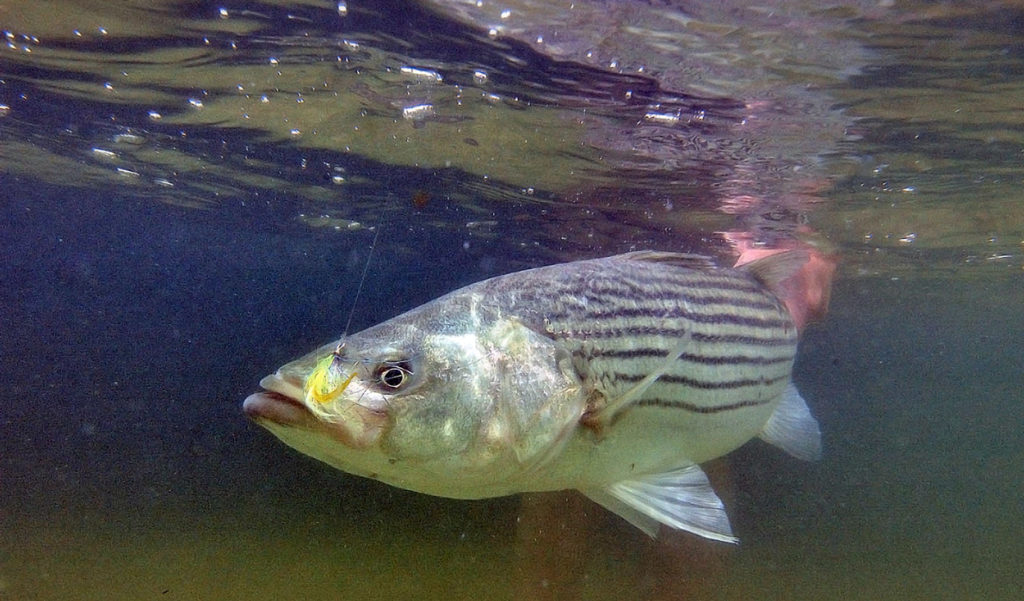 A striped bass hooked on a lure.

An outsider’s sharp eye on Maine