Seventeen endangered North Atlantic right whales died in Canadian and U.S. waters in 2017. Now scientists are saying the increase in deaths and decrease of calving rates could mean the species’ “functional” extinction in just over 20 years.

The situation is alarming Maine’s lobster fishermen, because some of the deaths are from entanglements with fishing gear. There were at least five additional live entanglements.

Maine’s lobster industry has been proactive in implementing measures to reduce entanglements. In fact, the Canadian government and lobster industry are now looking to the U.S. for advice on the subject.

But the dire situation has triggered a provision in the U.S. Endangered Species Act that reinstates the consideration of human impacts on the animal. Called a “biological opinion,” it could result in new federal restrictions on the fishery, including a possible shutdown. Federal regulators are additionally impelled by two conservation lawsuits filed this year, demanding additional measures.

“Everybody understands how serious an issue this is,” said Department of Marine Resources Commissioner Pat Keliher. “We all need to be talking about it.”

Remaining proactive in support of both whale conservation and fishery feasibility, Maine’s lobster industry is working with scientists, regulators, and conservationists to explore new avenues to prevent entanglements. Two possibilities now under study include ropeless fishing and new “breakaway” ropes.

The North Atlantic right whale is one of the most endangered species on the planet, historically exploited for its high-quality oil.

At that time, a federally convened, multi-stakeholder group called the Atlantic Large Whale Take Reduction Team implemented strategies to reduce hazards to large whales. Among those was slowing ship speeds in areas where right whales are known to be present.

Since 1997, fishing gear modifications include “weak links,” making it easier for whales to break away from entanglements; color-coding to track entanglement origin; neutral buoyancy ground line to reduce rope in the water column; and reduced numbers of vertical end lines, by trawling up traps (several traps with just one vertical line). And some areas are closed to fishing during times when whales are present.

The strategies resulted in a population increase to 483 in 2010. But things changed. The National Oceanic and Atmospheric Administration last right whale estimate was 458.

Now U.S. and Canadian experts are concerned about the species’ survival.

“This is a really difficult issue,” Maine Lobstermen’s Association Executive Director Patrice McCarron said during the presentation, “Can right whales and fishing rope coexist?” at the Maine Fishermen’s Forum on March 2, attracting a crowd of about 200. “There’s a lot of frustration, and a lot of people are wondering what this will mean for us.”

With only five births in 2017, the species could not afford the 2017 deaths, said Mark Baumgartner, an associate scientist with the Woods Hole Oceanographic Institution in Woods Hole, Mass. It’s expected that for every dead animal that’s seen, another two or three deaths have gone undetected, he added.

The situation is complicated by the whale’s shifting migration patterns. Off Canada, whales were in the Gulf of St. Lawrence—not their typical locale. Scientists hypothesize that warming ocean water is forcing them further north in search of higher-quality feed that occurs in colder water. But the area’s fishermen weren’t prepared.

In 2011, he said, 105 breeding females were counted. That should have meant a population increase since then. Instead, it’s declined. And a portion of deaths was breeding females.

“Right whales will be functionally extinct because most of the breeding females will be gone,” Baumgartner said. “We have years, not decades, to fix this problem.”

The whale reduction team continues to study the issue, and has formed subcommittees to study ropeless fishing and a new method to reduce the breaking strength of vertical end lines to 1,700 pounds. That compares with today’s polymer rope with breaking strengths as much as 12,000 pounds. A lower strength will allow an entangled animal to break it, said Amy Knowlton, a senior scientist at Boston’s New England Aquarium.

The aquarium’s photo-identification system, identifying individuals by markings, shows that 85 percent of the right whale population has been entangled at least once, and many numerous times, she said. Many entanglements are minor, and whales free themselves. But injuries are becoming increasingly complex and lethal.

Studies show 1,700 pounds is feasible for traps if operations are modified to relieve strain while they’re hauled, she said. The rope would incorporate weak links, in the form of short lengths of hollow braids. The aquarium is testing the concept in Massachusetts, she said.

With regard to ropeless fishing, “If you’re over the age of 50 this is going to sound insane,” said Baumgartner. “But I suspect if you’re under the age of 30 it might not sound so crazy.”

The idea uses acoustic technology to trigger deployment of a buoyancy device, lifting the trap to the surface, thus eliminating the need for end lines. The technology is used on a small scale in New South Wales, Australia. 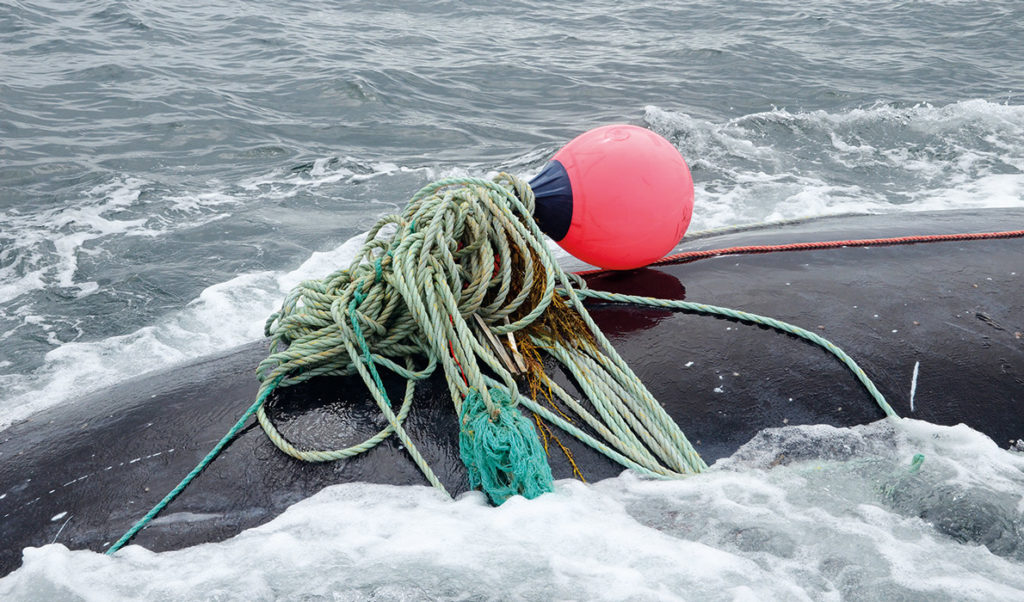 A right whale entangled by fishing gear in Canadian waters.