Kathy Luke has a map of the Fox Islands on the wall of her Utah home, a souvenir of her visit to North Haven in September.

“We decided to go back to where the Luce family lived and the reason that is so important is because not only did they just live there,” she says, “but they also were taught what we call the Gospel of the Restored Church by Wilford Woodruff.”

Luke and her ancestors, the Luce family, are members of the Jesus Christ Church of Latter-Day Saints, a church that has a strong connection to North Haven.

According to Christian Heimburger, Ph.D., historian on the Joseph Smith Papers Project for the LDS Church History Department, Wilford Woodruff was a prolific and successful Mormon elder whose preaching missions took him from Arkansas to Ontario and across the Atlantic Ocean to Great Britain. In 1837 it also took him to the Fox Islands, then united as Vinalhaven.

“He ‘felt impressed by the Spirit of God to take a mission to the Fox Islands,’ a place he apparently ‘knew nothing about,'” Heimburger said, quoting from a recollection by Woodruff. He and his preaching companion were initially welcomed to the North Island, given a barn to sleep in and a pulpit to preach from, but when dozens of Gideon Newton’s Baptist parishioners converted after Woodruff’s sermons, Newton launched a well-publicized effort to “put down Mormonism,” Heimburger said.

Fifty-three North Haveners, Kathy Luke’s ancestors among them, followed Woodruff west, eventually settling in Navuoo, Ill. An 1838 note in the “Record of Baptist Church Vinalhaven” says: “At church meeting excluded Nathaniel Thomas and his wife and Ruth Luce having joined the Mormons.”

Fifty years after his Fox Islands mission, Woodruff became the fourth president of the church.

“The first large group of visitors were members of the Wilford Woodruff family association, that was in 2003,” said Nan Lee, president of the North Haven Historical Society. Since then, North Haven has been visited often by members of the LDS, sometimes arriving by the bus load. Lee said they are interested in sharing genealogical and historical documents with the historical society and in visiting places significant to Woodruff’s time on North Haven.

“We went to the Baptist church which was the main church at that time. It created a lot of animosity when people left that church and joined the Latter Day Saints church,” said Luke. She and her friend also visited what’s known as the Mormon Cemetery, properly called the Annis Cemetery, which was on land owned by the Luce family, as well as their former residence.

“I don’t know how to describe it really except it was an emotional kind of thing to see the house and the old wood planks that my great-grandfather had pressed on the floors. It felt like you could walk where they had walked,” Luke said.

Luke said her church puts a strong emphasis on family history and genealogy. Lee said LDS visitors are interested in “touching base with the places those people knew and loved and seeing the places they came from before they moved west.”

“The visits are wonderful,” said Lee. “It’s interesting to see North Haven history through someone else’s eyes. These are descendants of people who chose to leave North Haven at a time when it was relatively prosperous.”

An 1837 entry in Woodruff’s journal describes North Islanders as “intelligent, industrious, and hospitable to strangers.” Luke is proud to trace her lineage back to those he referred to so favorably.

“It was kind of a feeling like I’m home. My heart is there and I know and understand a little bit more about the surroundings where they lived, a connection occurred and we want to go back, you know? We will, if we can keep our health going,” she said. 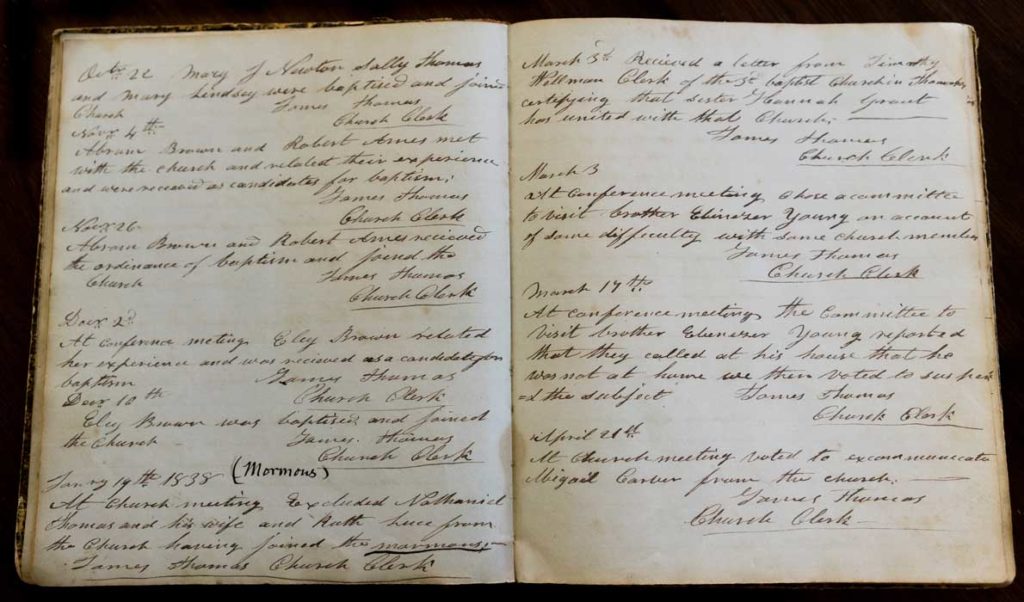 An 1837 entry in Woodruff's journal describes North Islanders as "intelligent