Maine business and government officials are expecting The Cat—the new high-speed catamaran ferry service between Portland and Yarmouth, Nova Scotia—will deliver an economic boost when it begins service on June 15.

“I expect it to attract a higher level of use than what we experienced with the Nova Star, and to generate more business activity,” said Greg Mitchell, Portland’s director of economic development.

Ridership of the luxury overnight Nova Star cruise ship was half of what was projected during its two years of service. And after spending $39.5 million (Canadian) to support the service, Nova Scotia’s government severed ties with the operator last fall, and contracted with Bay Ferries Ltd., which also runs two other routes in Canada.

A trip on The Cat will take 5.5 hours—nearly half the travel time of the Nova Star. The ferry will leave Portland at 2:30 p.m. and stay overnight in Yarmouth, Nova Scotia, and depart for Portland at 8 a.m.

Want to bring your car? There is a charge of $199 for passenger cars less than 6.5 feet long. Larger vehicles cost more.

The ferry is expected to have a capacity for at least 700 passengers and 200 vehicles. Nova Scotia’s government has committed $32.6 million (Canadian) dollars to help cover costs in the first two years of service.

Despite Nova Star’s difficulties, the luxury liner delivered significant revenues and visitors to Portland. It generated $300,000 per year to the city from taxes and fees, said Mitchell.

No research was conducted to assess the Nova Star’s economic impact. But Mitchell pointed to a 2009 study which showed that the average cruise ship passenger spends $81 in the city. If The Cat brings in 60,000 passengers a season, Mitchell reasons, that would generate $4.8 million of spending in the city, in addition to adding jobs and wages to the economy.

“Driving 60,000 people through our port is going to benefit restaurants, shops and overnight stays in hotels, and direct businesses to the waterfront that otherwise wouldn’t be here,” he said.

Even beyond visitor spending, having a direct link with Nova Scotia bolsters Portland’s status as a global port, he added. Along with the International Marine Terminal that handles cargo on the southern edge of town, “It puts Portland on the map from an international perspective,” he said.

In December, Portland Mayor Ethan Strimling wrote to Sen. Angus King outlining the importance of the ferry service to the city. Strimling said he expected that The Cat would create 50 new jobs in Portland—including positions in marketing, stevadoring, and in the terminal. In December, King and Rep. Chellie Pingree reached out to the Navy, urging officials to consider making a surplus vessel available for Bay Ferries to lease for the Maine to Nova Scotia service, citing the economic benefit.

“Portland’s working waterfront makes a big contribution to our local economy, and ferry service to Nova Scotia is an important part of that,” Pingree said in a statement.

“It’s an opportunity to invite people into Maine who might have an interest in a speedy passage to Canada, but might not have thought of coming here before,” said Carolann Ouellette, director of Maine’s office of Tourism.

Maine and Portland will get added exposure from the marketing conducted by Nova Scotia’s government and the ferry operator. That marketing will likely target visitors in cities like Boston and New York, which are primary feeder markets for Portland, said Lynn Tillotson, chief executive of the Greater Portland Convention and Visitors Bureau.

“Maine definitely benefits from all the marketing from the ferry and from Nova Scotia,” said Tillotson.

Business owners in downtown Portland said they saw a boost from the Nova Star, as they did any time a cruise ship was in town, and applauded the news of the high-speed ferry service.

“We saw a lot of people who just had a few hours to kill before they’d board,” said Arlin Smith, co-owner of Big Tree Hospitality, which operates Eventide Oyster Co., Hugo’s and The Honey Paw restaurants, located less than a half mile from the Ocean Gateway Terminal where the Nova Star docked.

In years past, arriving ferry and cruise passengers would drive or take buses straight to destinations like Kittery and Freeport—without stopping to spend in Portland, Smith said. But that has changed as Portland’s population and reputation as a food and tourist hot spot has swelled.

“People have started changing their agendas to come take advantage of what we’re offering,” Smith said. “In the last year and a half we saw a noticeable difference in clientele when the ships were in.”

Even if it’s not a huge influx, “The more people that are exposed to Portland for any amount of time, the better it is for all of us,” he added. “Even if it’s just two people, if they have a good experience they’ll tell other people, and that will trickle out.” 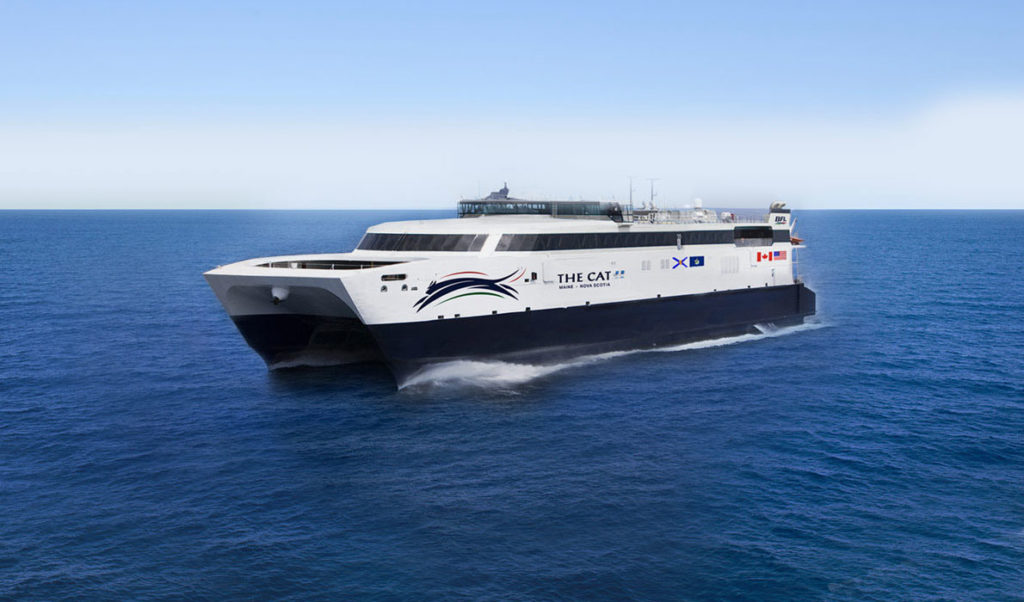 A depiction of the new version of The Cat