Battered by Hurricane Joaquin as it traveled from Jacksonville, Florida to Puerto Rico, the 790-foot cargo ship El Faro sank east of the Bahamas on Oct. 1. Thirty-three mariners perished, including five graduates of Maine Maritime Academy and two from Massachusetts Maritime Academy.

As is the nature of sea disasters, closure is difficult to achieve. Only one body has been found in the wreckage of the ship, and it was unidentifiable. The ongoing investigation has yet to reveal the exact chain of events that led to the demise of El Faro. The ship’s “black box” data recorder has yet to be found, and it has been difficult to find all the major wreckage.

In January, the National Transportation Safety Board released underwater footage of the wreckage; the release coincided with a 60 Minutes report on the ship’s sinking. In the report, investigators tried to piece together what’s known: The ship lost propulsion in the midst of a Category 4 hurricane with winds of up to 135 knots, reported by Capt. Michael Davidson early on Oct. 1, along with news that the ship was listing 15 degrees and that there had been a hull breach he believed was manageable.

Investigators believe the boat eventually capsized, and its top two decks were sheared off in the process. No one has been able to formulate a step-by-step sequence of events for how the ship sank, and it’s possible no one will.

Physically, it’s likely El Faro ultimately sank because it was battered by the wind and the waves of an intense hurricane, but it most likely took a series of events, some decades old, others hours old, to have the ship cross paths with Joaquin.

For starters, much has been made of the age of the ship—it was 40 years old. While it passed all required inspections, El Faro was probably still in use because there weren’t better economic options, according to Rick Spilman, a naval architect and an author of “The Old Salt” blog.

After World War II, the U.S. commercial shipbuilding industry shrank, as rising labor costs drove shipbuilding companies to other countries. But under U.S. maritime law—the so-called Jones Act—shippers who operate along the U.S. coast and territories must fly the U.S. flag, and that typically requires using a ship built or serviced in a U.S. port. Shipping companies operating in U.S. waters might find it easier to maintain older vessels than invest in new ones.

“The reason El Faro was so old is because U.S.-flagged ships are very, very expensive to build,” Spilman said.

Even a modern ship would have had a tough time withstanding Category 4 winds without running into trouble.

Many wonder why El Faro was in what seemed to be the wrong place at the wrong time. Speculation centered on the decision-making process of the ship’s owners, Tote Inc., and its captain. The investigation found no evidence that Tote directly prodded the captain—Michael Davidson of Windham, and a MMA grad—to sail despite the pending hurricane, and maritime protocol states that the final call to sail lies with the captain. That is the way things always work, at least in theory, Spilman said.

“In the real world, everyone feels expectations from their bosses to meet certain expectations,” he said. “All of these things are very intangible.”

Davidson did sail, and many wonder why he chose the east side of the Bahamas on his way to Puerto Rico, a path which left the ship sandwiched between the storm and the islands, rather than to the west side of the islands. Davidson had a good reputation as a sailor among his peers, leaving many to wonder if he got inaccurate reporting on the storm’s position.

The answer may be, however, that hurricanes are simply unpredictable, no matter how good we get at storm tracking, said Richard Burke, a marine engineering professor at the State University of New York Maritime College.

“A hurricane is going to go where it wants to go,” Burke said. “We can forecast all we want, but a forecast doesn’t pick a hurricane’s path.”

Once a ship crosses paths with a storm, everything gets exponentially more dangerous. Several things could have gone wrong, independently or in conjunction, said Burke. Cargo could have broken free, or water from waves could have entered in through a hole or improperly closed hatch, creating havoc for the vessel’s center of gravity. Stormy seas also could have made life perilous for the crew, and they could have gotten injured and unable to do their jobs at critical moments during the storm.

At some point, El Faro lost power. It’s possible that water got into the steam-powered boiler system, throwing off the delicate balance of temperature and pressure the system needs to operate. Burke personally knew Richard Pusatere, the engineer of El Faro, and suspected Pusatere did everything humanly possible to get the ship’s power system back online.

“I’m pretty sure I know where he was when the ship went down and I can imagine how difficult it was down in that engine room,” Burke said.

A cargo ship may be vast, but it still depends on being able to point its bow into the waves to stay afloat, just like any smaller boat. Without power, the ship most likely was at the mercy of the waves. Once that happens, it’s hard for a vessel to stay upright and intact, said James Irish, an ocean engineering research professor with the University of New Hampshire School of Marine Science and Ocean Engineering.

“The natural condition for the boat is broadside to the waves,” Irish said. “The wave force hits the whole boat at once.”

The ongoing investigation into the sinking of El Faro may bring some answers and some closure to this nautical disaster, but the information learned is unlikely to prevent all such disasters in the future. The ocean is inherently dangerous, and there will always be some risk to those who make their living on it, said Burke.

“I’ve long been of the opinion that there’s nothing that mankind can build and put in the ocean that the ocean cannot destroy,” Burke said. 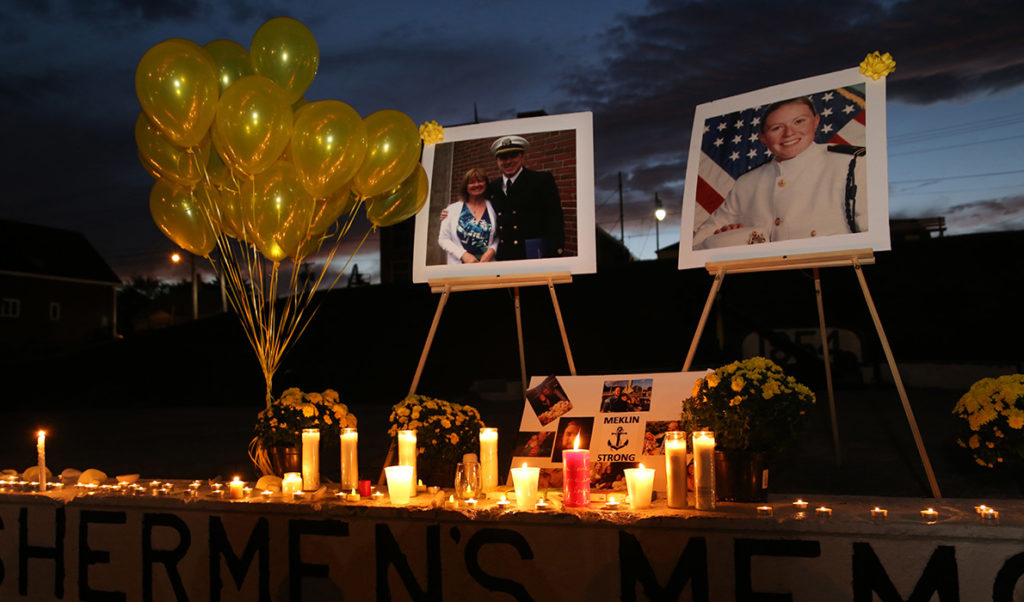 A memorial service was held in Rockland for two of the area's victims in the El Faro sinking.