These massive marine mammals do not want their habitats to be either “too hot” or “too cold.” Instead, they migrate to “just right” marine environments that support their basic needs of feeding, breeding, and raising their young.

Given recent changes in water temperature and salinity, some Gulf of Maine whales have relocated to Canada, to the “just right” Gulf of St. Lawrence.

From York County’s Kennebunk to Washington County’s Lubec, Maine’s working waterfronts are populated by an eclectic assortment of “whale watch” companies. The biggest vessel in play—an aluminum-hulled, high-tech, Australian-built, 40-knot, jet-powered catamaran—sails out of Bar Harbor and is licensed by the U.S. Coast Guard to safely accommodate 350 passengers. The smallest whale watch ship is likely a 25-foot Northern Bay “lobster yacht” that departs from Lubec, outfitted to accommodate as many as six passengers.

Those staffing the front lines of the whale watch tourist season have both questions and concerns. How are melting icebergs and glaciers in Greenland impacting the biochemistry and ecology of the Gulf of Maine, the Bay of Fundy, and commercial fishing banks to the east? Some see whale census dips as symptomatic of the recent warming of the relatively shallow Gulf of Maine. Then there are those who don’t see a problem. At all.

“Business has been really good,” says Joe, the manager of Cap’n Fish’s Whale Watch on Boothbay Harbor’s waterfront. “There’s a lot of whales. We’ve been here for 28 years, and the whale sightings here have increased over the last 15 or 20 years.”

Zack Klyver’s experience has been vastly different. He’s the marine biologist and naturalist who manages the Bar Harbor Whale Watch company. He’s concerned about what he sees as too-sudden changes within the habitats of traditional Gulf of Maine whale species: humpbacks, minkes, and two endangered species, finbacks and right whales. Even sperm whales (think: Moby Dick) have been spotted in the Gulf of Maine since 2012, so far none of them white.

“All the fresh-water ice melt in Greenland affects ocean salinity and is speeding up the current. Right whale sightings have gone down by half in the Bay of Fundy since 2010, but in the spring, off Cape Cod, they’ve gone up 300 percent,” he said.

“Whales feed on plankton and fish. Maybe there are more nutrients there in the spring. Here, overall, the number of whale sightings has been going down. Between 1989 and 2016, we encountered whales on 80 to 90 percent of our trips. In 2017 that number dropped to 34 percent. Are whales the canary in the coal mine for the Gulf of Maine? There’s a tremendous need for more information,” Kylver said. 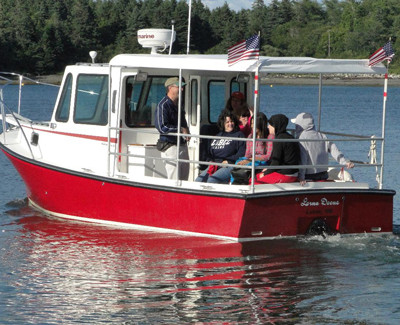 Klyver is also orchestrating and marketing lighthouse tours as photo-op outings. To give lighthouse enthusiasts more elbow room for photography, a 10-hour, 16-lighthouse excursion last August was limited to 180 passengers, about half the rated capacity of the Friendship V. That late summer lighthouse trip was sold out in April, with a waiting list, only days after being announced.

Along the Bay of Fundy, Downeast Charter Boat Tours in Lubec has been successfully showcasing excursions without a focus on whale sightings. Lorna Doone’s passenger capacity is six. Over the last 10 years, the focal point of every outing is the Old Sow whirlpool, a rare example of tidal marine hydraulics. It’s the dynamics of twice-a-day collisions of the Bay of Fundy’s very-high and very-low tides. An up-close look requires a skilled captain who is maneuvering a small vessel.

“The first season we started we had whale sightings on 100 percent of our trips,” said Capt. Ralph Dennison. “Then it slacked off. It is not that there were less whales, they just don’t all come into the bay. Last year was unbelievable, lots of humpbacks, finbacks and the occasional right whale. And we always see Old Sow, two lighthouses, and lots of seals, bald and golden eagles and osprey.” 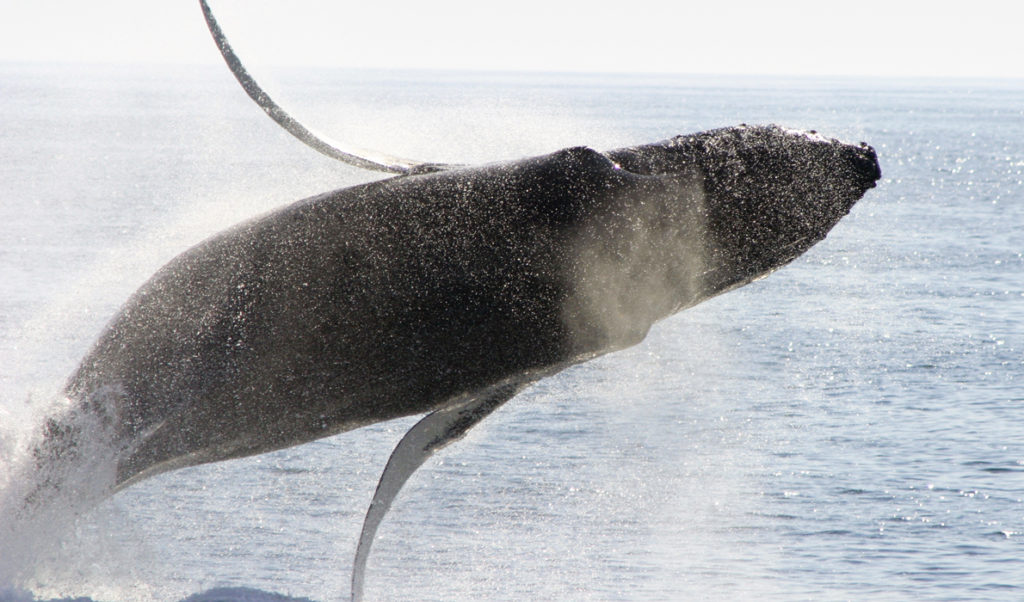 A humpback puts on a show.