We were attending the safety seminar and enjoying the company at a small Midcoast fly-in a few months ago, largely because good cooking had been promised. Before the chili and such was served up, though, Jeremy, the Penobscot Island Air pilot with whom I flew to the event, approached me while I was making idle chatter with some bush pilot type about backcountry airstrips. He asked whether I wanted to stay for the chili or if I’d be up for flying to the Auburn/Lewiston Airport with a few pilots from Belfast, to have lunch at the rib joint over there.

I was mostly riding along anyway; I did get to fly a little that day, but as I’d never landed a tailwheel before, Jeremy was in charge. Evidently one of the Experimental Aircraft Association guys from the Belfast club had suggested, “Let’s fly to Lewiston because there’s a barbecue place there.” Welcome to my new subculture.

The little “RVs” (that’s the type of aircraft, named for the initials of the designer) from Belfast were so much faster than our aged Cessna that they left Jeremy and me in the dirt. Uh, sky.

We got to Lewiston soon enough, though (people call it Lewiston but the airport is actually in Auburn. Actually it’s almost in Poland). I was soon presented with the biggest pulled pork sandwich I’ve ever seen, at the Backwoods BBQ and Grill. Highly recommended.

The planes our lunch companions flew were mostly built from kits, and they are pretty cool. They’re also really small. One of the guys around the table started describing the time he flew his little home-built airplane to Baffin Island in arctic Canada.

Readers may be familiar with the perhaps exaggerated reputation of Maine’s own Matinicus Island. If you think Matinicus is primitive, sketchy, lawless, remote, or expensive, it’s got nothing on Baffin Island.

I never did hear the explanation of what prompted my new friend’s solo Baffin Island expedition, but it wasn’t totally spontaneous: he’d had to stage fuel caches in various places along the route. Dig out a map of Canada and take a look—this is some really isolated geography.

Upon arrival at whichever little Baffin airstrip he landed at—and there aren’t too many choices—he was met by an astonished local: “What are you doing here? How did you even get here?”

His tiny, kit-built RV was somewhat undersized, by prevailing opinion, for a trip into such forbidding country. Our intrepid pilot, having just come a long way, of course asked to buy fuel.

He had planned to simply park his airplane and go hiking in a nearby provincial park for a few days.

“Where are the tie-downs?” he asked, as one might ask of any busy-looking ramp rat at any small airport anywhere. “Tie downs? Huh? Nobody parks their plane here! That’s nuts! You can’t just leave your airplane outside! Besides, they’ll strip it to the bones! You’ll come back and it’ll be up on blocks!”

Some helpful fellow in a pickup truck who seemed—as best a visitor could make out—to actually work at the little airport offered to take the radios and avionics home for safe keeping for a couple of days. That must have been reassuring. To be sure, the visiting pilot wasn’t sure if this kindly soul was truly offering help or was one of the parts salvagers. It all worked out in the end.

As Jeremy and I flew back to Owls Head from Lewiston, with a stop at Twitchell’s Airport in the big city of Turner, I thought about Baffin Island. I live on Matinicus, 20-some-odd miles out of town, with a few dozen neighbors and no store, no doctor, no police, and no latte. But we can take great comfort knowing that we are deep in the heart of civilization.

Eva Murray lives on Matinicus where she writes, volunteers as an EMT, and runs the island’s solid waste/recycling program. She is the author of three books, most recently Island Birthday, an illustrated children’s book. 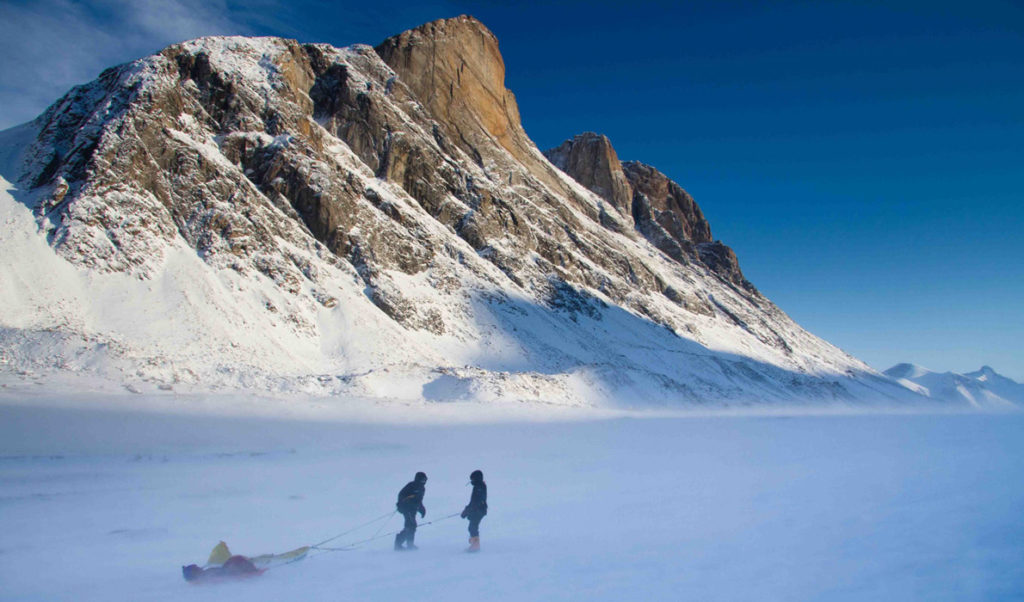