Despite being in the depths of winter—or maybe because of it—a Feb. 8 gathering in Portland saw a host of forward-looking ideas aired that may shape the Maine coast and islands through the next decade.

The Waypoints Forum 2019, hosted by the Island Institute (publisher of The Working Waterfront), featured speakers on such diverse topics as salmon farming, education, and developing an entertainment venue.

The event also included an informal conversation between Hannah Pingree, who had just been appointed to a new role in Gov. Janet Mills’ administration, focusing on innovation, and Island Institute president Rob Snyder.

Pingree identified what she sees as the state’s three biggest challenges: climate change, a shrinking work force, and a difficult business climate.

And, since “state government is much smaller than it used to be,” she said local government, nonprofits, and the private sector must shoulder more of the problem-solving burden.

In answer to Snyder’s question about what nonprofits can do to partner with the state, Pingree was direct, saying they must provide “The evidence of solutions.”

The work force challenge is tied to the lack of demographic diversity, and Pingree pointed to the “welcome home” theme of Mills’ campaign and inauguration.

“Maine is a welcoming state,” she said. “People from away have some good ideas, and we should be nicer. Maine will die out without that spirit and attitude, that we have to be welcoming.”

To a question on the new administration’s view of the lack of broadband internet in the state, Pingree said it was one of the new governor’s top priorities.

“It’s not easily solved,” she said, but state officials could push providers harder to provide more access. “Every industry in Maine needs it,” from farmers to fishermen.

A new kind of fishing was covered earlier in the forum, with Jason Mitchell of Whole Oceans explaining his company’s plans for a land-based salmon farm in Bucksport.

By 2050, he said, the world must double its supply of protein to feed an additional 2.5 billion people. By 2030, he added, 62 percent of fish consumed will come from aquaculture.

The U.S. consumes 23 times the amount of Atlantic salmon that is produced here, and so 500,000 tons are imported annually, from Norway, Demark, Scotland, Chile, and Canada.

Whole Oceans is pursuing developing a tank aquaculture operation on a 108-acre portion of the former Verso Paper mill in Bucksport. (A similar operation is being pursued in Belfast by the Norway-based Nordic Aqua Farms.) The former mill site has much of the needed infrastructure in place, Mitchell said, and the concept has been embraced by the community.

A different sort of former industrial site, Thompson’s Point, is being developed as a mixed-use venue by a group that includes Chris Thompson. Though the business is probably best known as a venue for events and concerts, the 30-acre site also features a craft brewery, a software design firm, a caterer, a pottery studio, and the International Cryptozoology Museum.

“I’ve come to think of Thompson’s Point as a laboratory for community living,” he said. The owners ask themselves, “What could only happen here?”

Marci Train, a grade 3-5 teacher in a school with 16 students on Long Island in Casco Bay, described the nature of island community life.

“You don’t wait for someone else to do something,” she said, explaining how she became a volunteer firefighter. “You jump in.”

Xavier Botana, a native of Trinidad who was raised in Chicago and now is the Portland school system’s superintendent, related how he learned about island communities when he proposed closing one of its schools. He came to understand how important those schools are to their communities, he said.

Portland is home to the state’s largest and most ethnically diverse school system, Botana said, which has helped it buck the statewide trend of declining enrollment. The mix also has educational benefits, he said, as research has shown a “diversity dividend” comes with students learning from those of different backgrounds.

“Diverse teams feel less comfortable, and that’s why they perform better,” he said. 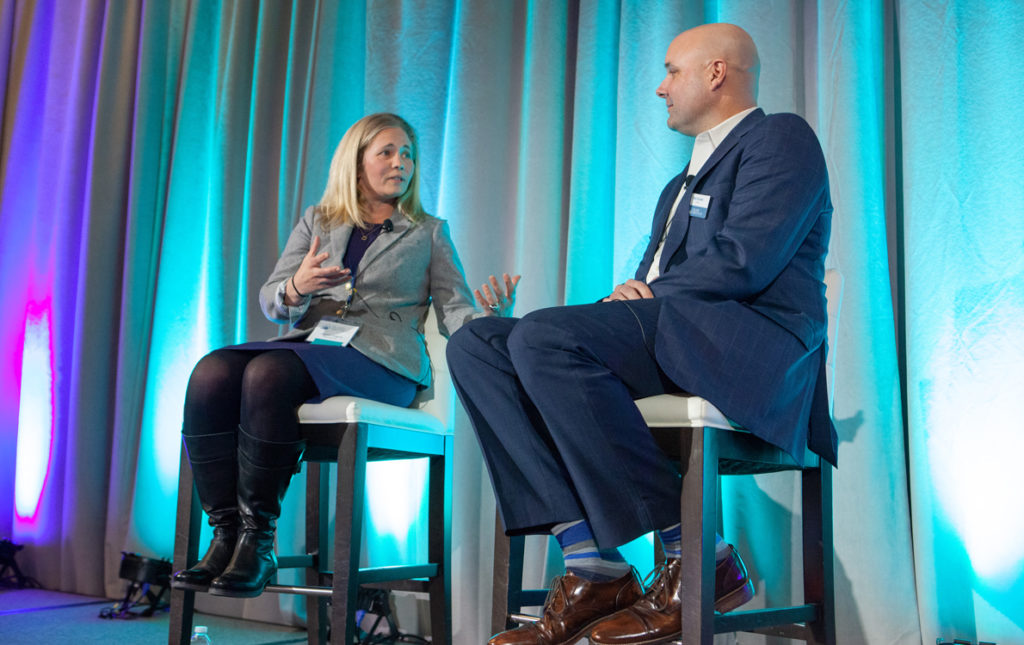