When Washington Academy first opened its doors in 1792, its namesake—yes, the father of our country, George Washington—was still president. The private high school in East Machias that serves students from 27 Washington County towns and a couple of dozen countries marks its 225th anniversary this year.

In a region that struggles with an aging, declining population and an often-dire economic climate, Washington Academy is a success story. Its administrators say it provides a high-quality education, characterized by small class sizes and after-class access to teachers. Curriculum ranges from academic disciplines that lead to college, such as international business, finance, engineering, and law, to training that leads to immediate employment, such as nursing, culinary arts and boatbuilding.

It’s a regional economic driver, too. The school’s annual budget is $7.4 million, and it employs 34 teachers and five ed techs, with a total staff of 83. Maintenance and repair work on the nine buildings and 80-acre campus keep local contractors busy, and the 90-plus boarding students spend money in nearby Machias on weekends and during after-school hours.

But the Washington Academy story can’t be told without talking about international students.

When Judson McBrine, now the head of school, first arrived in 1997, the student body numbered 274. The U.S. Navy base at nearby Cutler had closed, and surveys projected a significant decline in the county’s school-age population. Teaching and staff positions had to be eliminated.

“I went to the board and said, ‘We’ve got to do something. I don’t want to spend my career cutting jobs.’”
What the school did—and what other private schools have done—was to recruit students from other countries. In 2002, nine international students enrolled, and a dormitory was built. Today, there are 96 international students at the academy, hailing from 24 countries, and there are three dorms.

Some schools have focused on recruiting Asian students—often, exclusively from mainland China. Washington Academy concluded that not only was such a strategy risky—a bad turn in international relations could end the connection—but that a broader approach would create a more dynamic, diverse school community.

At one time, 66 Chinese students were enrolled, but McBrine observed that “It’s not diverse if you have Chinese and American students.” 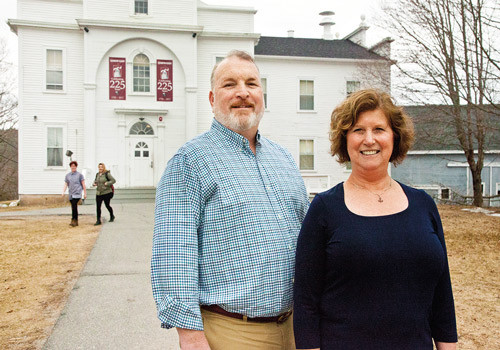 Judson McBrine, the head of school, and Robin Moloff-Gautier, admissions director, outside one of Washington Academy’s nine buildings.

Foreign students from the same country might become a clique within the student body and not mix, he explained, so the goal is to enroll students from Europe and Asia.

“There’s a few of us who travel,” she said, noting recent trips to Russia, Ukraine, Hong Kong, South Korea, China, Spain and Taiwan. “I’m still a little jet-lagged” from the last trip, she confessed.

McBrine also is a world traveler: “I was in Bermuda for five days in September and in China for a week,” he said. “We’ll be in Vietnam in May, and we think we might hit Mexico before the year’s over.”

And the school is reaching into new regions.

“This fall, we’ll be adding Poland to our market,” Moloff-Gautier said, joining Hungary, Slovenia and the Czech Republic.

Educational consultants host school fairs in these countries, she explained, where parents with the financial means consider sending their children to the U.S.

The sales pitch the school uses to persuade parents to send a child to East Machias isn’t much different than that used by Maine’s tourism industry.

“Safety,” said Moloff-Gautier, is a quality that appeals to parents in many countries.

“It depends on where you go,” McBrine said of the pitch. “When you go to Beijing, it’s clean air.”

“For Asia,” Moloff-Gautier added, “we really promote the rigor of our programs,” and the technology and mathematics courses. The international business program is also a draw, in part because students learn how to navigate American culture while living here, and by being immersed in an English-speaking setting, their language skills improve.

“One of the draws for Asian students is U.S. universities,” she said. Graduating from a school like Washington Academy provides a foot in the door to admission to Harvard or Stanford.

For boarding students, faculty and staff care about more than grades. Moloff-Gautier said a girl preparing to fly home during a break had neglected to renew her passport, and staff responded quickly, assisting her with the red tape; that sort of help is common, she said.

Two international students actually commute to and from school each day from Campobello, the Canadian island linked to Lubec by bridge. “There’s three more that want to come next year,” McBrine said.

Still, 80 percent of the now 425-strong student body are Washington County kids. Several towns without high schools allow parents to choose where their children attend, and the state pays about $10,000 toward tuition. In some towns that are part of districts with high schools, agreements have been approved that allow towns to pay tuition to the academy.

The ethnically diverse school community is an important benefit for the local kids, McBrine and Moloff-Gautier assert. Living in small, often isolated towns, their school experience has them interacting with peers who look, speak, eat, and pray differently. Many become close with international students, and are invited to visit South Korea, Italy or Greece, giving students from small Downeast towns eye-opening experiences.

McBrine’s son, a student at the school who hopes for a career in international business, already has a leg up: “My son has connections all over the world,” he said.

The school takes pride in its history and longevity. McBrine notes that Washington Academy opened before public education was established, and that classes were first held in circa-1770 Burnham Tavern in Machias, where local patriots met leading up to the Battle of Machias. The school’s charter was signed by John Hancock, and two current board of trustee members can trace their roots to the group that petitioned to form the school.

There are challenges, though. The 19th century buildings that make up part of the campus need perennial attention—one of the dorms is housed in a building that dates to 1798—and school officials want to raise funds to build a student union that would include a cafeteria and lounges on one level and a center for innovation and entrepreneurship on the upper level. As a private school, no state funds are available for such capital improvements.

“We have so many opportunities,” she said of her Washington Academy experience. “The teachers are very, very helpful. They always make time for you.”

In addition to being classmates, some of the international students are friends, she said. She is the third generation of her family to attend, but like many who grow up in rural Maine, she’s eager to see the wider world. Unlike others, there’s a chance she may know someone in that wider world, thanks to her high school experience. 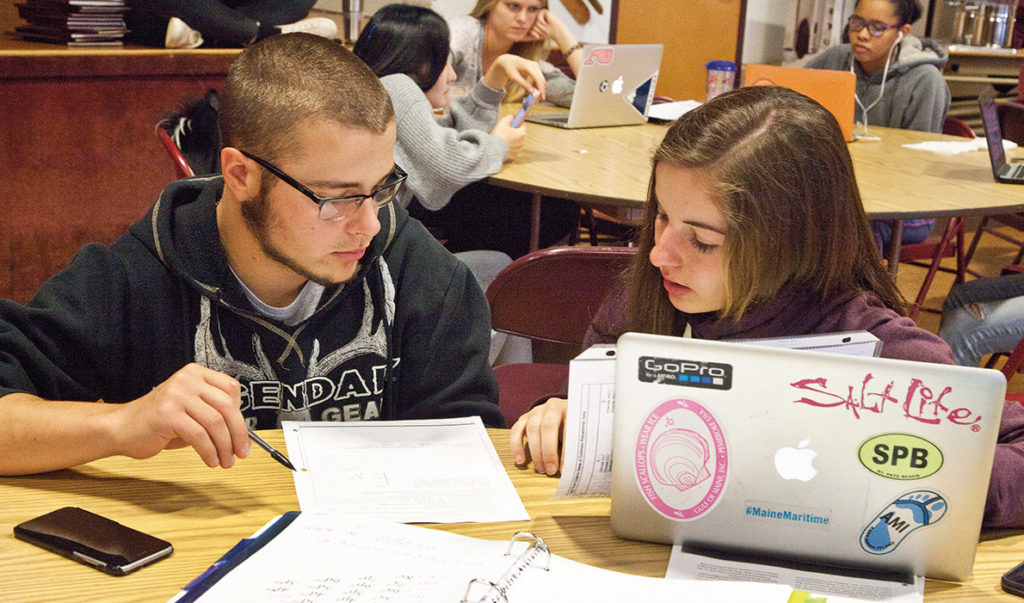