Maine’s Department of Transportation has awarded the contract for a new ferry to Washburn & Doughty of East Boothbay. The company was one of five bidders for the 154-foot passenger-vehicle ferry, and the only Maine-based company.

The state had estimated the cost of the new vessel at $12 million, but Washburn & Doughty’s bid came in at $8.8 million. The funding will come from a combination of Maine bond funding and other local highway fund and federal dollars.

The vessel is designed for the Maine State Ferry Service to be able to serve Swan’s Island, Frenchboro, Islesboro, North Haven, and Vinalhaven. It will have three main deck lanes, for a capacity of 23 cars or a mix of cars and trucks, as well as 250 passengers.

In 1992-1993, Washburn & Doughty built three ferries—the Capt. Neal Burgess, the Capt. Henry Lee, and the Capt. Charles Philbrook, known as the “sister ships”—that are still in operation for the state ferry service.

“This contract will create jobs at our shipyard during its construction,” said Katie Doughty Maddox, vice president of sales and marketing at Washburn & Doughty, and added that the yard’s staff and managers are pleased to be able to serve islanders.

“We are thrilled to have a Maine boatyard with an impeccable history of quality as the successful bidder for the new ferry boat,” said DOT Commissioner David Bernhardt. 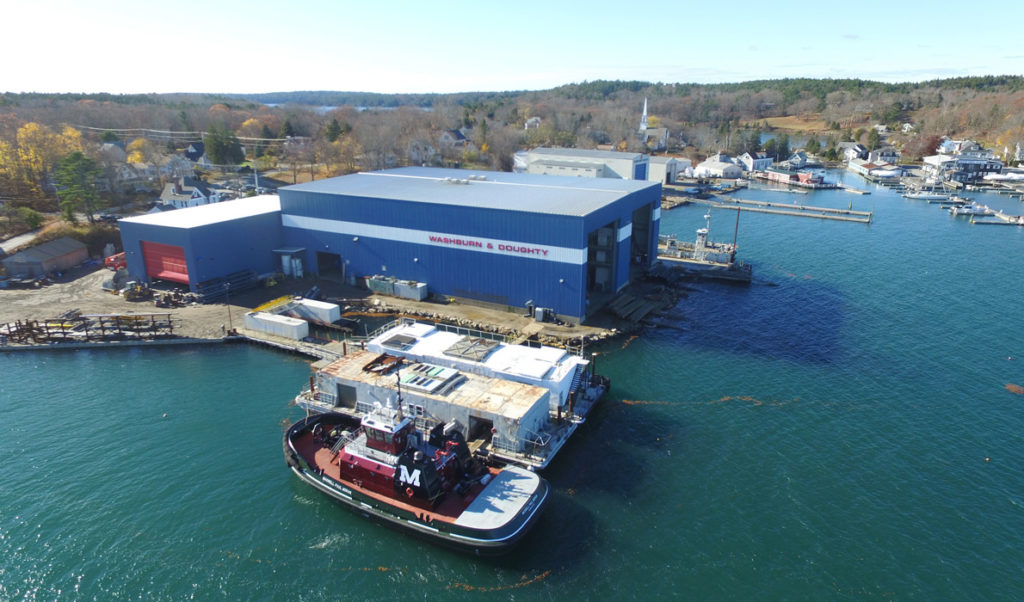 An aerial view of Washburn & Doughty in East Boothbay.