Carolyn Walker first heard about invasive plants while taking horticulture classes 25 years ago. One summer when she arrived at her family home on Casco Bay’s Cliff Island, she noticed a lovely purple plant. It caught her eye not for its attractiveness, but because it had overrun the island’s marshes.

Today, purple loosestrife is widely known as invasive, crowding out native wetland plants and altering wetland ecosystems. But back then, said Walker, a garden nursery owner from Pennsylvania, people planted it in their gardens.

Non-native invasive plants cause environmental and economic harm, Devine said. They crowd out native plants, which are vital to the health of the land as well as to the creatures that depend on them to survive and thrive.

Some of these plants—notably the universally-despised Japanese knotweed, frequently called bamboo—release chemicals into the soil that don’t allow other plants to survive.

Studies conducted by researchers in Maine, Connecticut, and Missouri found that Japanese barberry and bush honeysuckle harbor greater concentrations of the ticks that spread diseases such as Lyme than do native shrubs.

As part of their land management responsibilities, he noted, land trusts like Maine Coast Heritage Trust actively maintain invasives control and elimination measures. This year, the state made it illegal for 33 invasive plants to be sold, imported, exported, purchased, or intentionally propagated for sale. And cities and towns have instituted invasive plant management initiatives.

Falmouth, for example, offers workshops about invasives and last spring passed ordinance amendments that prohibite the use of invasive plants in landscaping of new subdivisions.

Individual land owners and gardeners, too, are taking action by removing invasives from their properties and gardens. Unlike Cliff Island’s Carolyn Walker, who couldn’t find anyone knowledgeable when she decided to mount a defense against the purple loosestrife invading the island’s marshes, today there are resources to help people remove and control invasive plants.

Some of the recommended methods, though, are controversial, such as glyphosate, used in the product Roundup.

“Herbicides are part of the solution, but also a problem,” said Devine. “People—for good reasons—are really wary about using herbicides.”

The International Agency for Research on Cancer, part of the World Health Organization, declared in 2015 that glyphosate is probably carcinogenic to humans, but numerous studies about the effects of the chemical on fish and humans and other mammals suggest it is non-toxic or of low toxicity. Other studies suggest that it is not the glyphosate itself that causes harm but other ingredients added to the product, especially surfactants, which help substances spread more uniformly.

“I don’t know who to believe right now (about glyphosate),” said Bittenbender, “but there are other chemicals that can be used.” Both he and Devine say that while herbicides are a tool in invasive plant control and eradication, they must be used carefully and appropriately for the situation.

But Carolyn Walker doesn’t think they should be used at all. “It just doesn’t make sense, because it’s not selective,” she said. “It’s not like it’s just going to kill bittersweet.”

For decades, she and various volunteers dug or cut out invasive plants on the island. Since 2010, the Cliff Island Corporation for Athletics, Conservation, and Education has hired a full-time manager and a part-time assistant to run its invasive species management program and coordinate community volunteer activities.

Walker, Bittenbender, and Devine differ on how to manage invasive plants, but all agree the best approach is to make invasive plant management a routine part of yard maintenance.

Are invasive plants on your property or in your garden? Check out these resources: 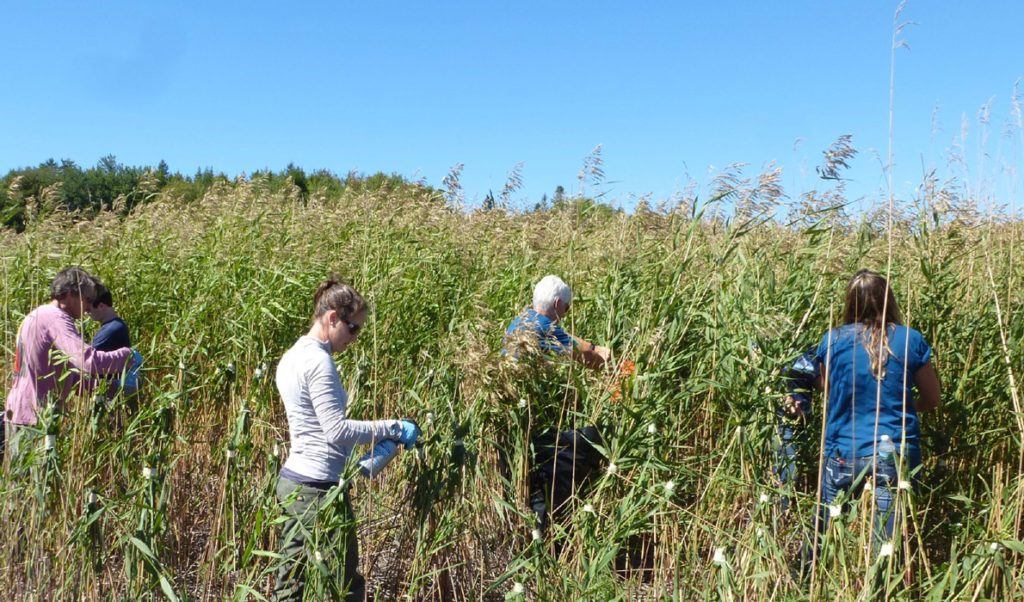