As people start to reappear in the Cranberry Isles, looking forward to a fresh summer season, no one seems to be asking, “How was your spring?” Most everyone in the Northeast has experienced a colder, wetter month of May than usual. When people arrive to see tulips barely starting to fade and lilacs still blooming they know we are a bit behind schedule on the islands.

The May weather just made everyone glum. We experienced maybe six nice days, total. Three of those days came as a stretch of record-breaking warmth in the middle of the month. Temperatures were in the 80s. Encouraged by the warm spell, I decided to buy some seedlings to plant before I took a trip to Baltimore over Memorial Day weekend.

The woman at the nursery looked at me sternly and said, “You’re not going to put these in the ground during the next two weeks are you?” Um, well, what about all the warm weather we just had? “Nope. That was a fluke. It’s too cold! These have only been in the greenhouse. You’re going to have to keep them inside!”

Oh. I could have put the plants back and bought them in June, but I wanted to feel like I had accomplished a little start on my summer garden. Before I left, I managed to plant some spinach, carrot, and lettuce seeds. I covered them with reemay (that amazing white garden fabric that lets in water and sunlight while keeping seedlings protected from wind, cold, and bugs.) As I worked, a few passing people said, “Your garden looks great!”

Really? When I look at my garden I see the bare patches where I intend to plant things. What people see from the road is a border of perennials that gets greener and fuller by the day as they come back to life. The hosta, the delphinium, the astilbe, the geum, the lavender, the poppies, the iris, the anemones, the bleeding heart, the chives, the mint, etc. My garden was starting to look good. I had just forgotten to notice. It’s easy to take plants for granted when they return year after year.
On my flight home from Baltimore to Portland, I sat next to a woman from Annapolis who was on her way to open up her summer cottage in Blue Hill.

“Oh, I’m from Cranberry Isles, not too far from you,” I said and commented about how pretty it is in the Blue Hill area. She mentioned that she had been out to the islands last year, and that I, too, was lucky to live in a beautiful spot.
My flight companion was anticipating the Blue Hill Library plant sale on Memorial Day. “Can you imagine?” she commented. “People just dig up and separate their plants to donate from their own gardens! Oh, the perennials you have in Maine. You are so lucky!”
I asked my friend Susie about this when she arrived for ten days in June.

“Do you think we can grow better perennials here than you can in Rye, NY?”

“Duh,” she said. “I can’t grow delphinium at home. It gets too hot. You have many more kinds of perennials here.”
Susan, a friend who is here from Baltimore for an island wedding said, “Wow. I like June on the island. The apple trees are amazing. I never knew it was so nice!” (She’ll be back in August when the panorama of plants is quite different.)
This year, in early June, one might still wear gloves and a headband to go for a walk, but there are also lupines about to blossom and the lilacs are at their peak. Beach peas are in bud along the road to the Coast Guard station and it looks like it will be a good year for the rosa rugosa.
In my garden, under a piece of reemay, the tiny carrots are up. I can already flavor a salad with what I pick to thin my arugula seedlings. Soon it will be warm enough to plant more annuals, to replace the ones I put in too early. This year I’m looking forward to a warmer July with its afternoons at the beach and its gorgeous gardens. In the meantime, June is my perennial favorite. 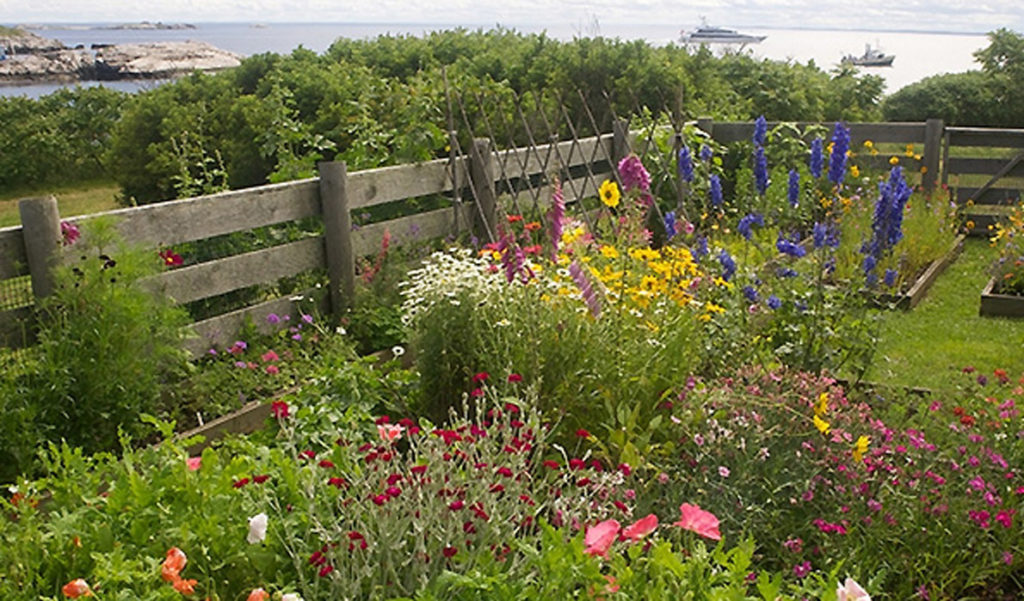 An island garden in Maine.