Last May, the Vinalhaven School participated in one such undertaking. “Why Trash Our Treasure?” began as the school’s annual community service project and snowballed into a school-wide art project and public service announcement.

Each spring, students and staff take part in Community Clean-Up, a morning dedicated to picking up litter along roadsides as a way to give back to the community that supports them. During a planning meeting for this year’s cleanup, gym teacher Deborah “Jake” Tuminski found herself questioning the validity of the exercise.

“I don’t think that there’s been a real turn around in people’s attitude’s toward littering,” she said. That got Tuminski thinking about what could be done to make a bigger impact on students and the community to send a message that littering is not OK.

“My original thought was to put [all the trash] in the town parking lot,” said Tuminski. However, she talked with art teacher Heather White and the two came up with a creative plan they hoped would impact students and the community.

“I thought about making it fun,” said White. “I was thinking about really big ideas, trying to visualize what we could actually do.” She started with the documentary Waste Land, which follows artist Vik Muniz and his work in the largest garbage dump in the world on the outskirts of Rio de Janeiro, Brazil.

With the film as a guide, White and her students discussed big questions, such as “Can art bring about change?” and the idea of using everyday things, such as litter, to make a personal statement. White, Tuminski and the students settled on a multi-faceted project for which they adopted the slogan, “Why Trash Our Treasure?” The end result was a 30-foot trash collage photographed from the air at the end of Community Clean-Up.

On cleanup day the entire school, grades K-12 plus staff, spent three hours collecting trash along the roadsides, filling about 100 bags that each weighed about 10 pounds for a total of half a ton.

Merry Boone and her husband Jim collect litter as a community service each day on their morning walk. They joined the school group for Community Clean-Up.

“We take the same route every day, and there’s always trash waiting for us,” said Merry. “There’s always a fresh supply.” The couple has noticed patterns in the trash, such as Slim Jim wrappers, lottery tickets and cellophane wrappers from cigarette packs, things that people buy while out for a ride and then toss from their vehicles.

“The world is too beautiful to allow litter to mess it up,” she said.

Similarly, Vinalhaven Town Manager Stephen Eldridge recalls his reaction to seeing the roadside trash when he first came to the island.

“There’s an overwhelming amount,” he said. “It just surprised me. I was taken aback. It’s just beautiful here and [the trash] detracts from that.”

In the past, bagged trash collected during the clean up has been left on the roadsides for the town crew to pick up. This year it was transported back to school.

Once there, high school students had the unenviable task of opening bags and sorting to look for items for the collage. Anything colorful, heavy or otherwise interesting was set aside. Among the items chosen were a tricycle, a scooter, multiple doll heads, pot buoys, bait bags, a plastic table top and a couple of basketballs.

With White and Tuminski as their guides, high school students then set to work filling a painted map of the island done earlier on the playground pavement with the trash. It was a more intricate task than one might expect. While it was possible to dump entire bags on the larger areas and simply spread the trash around, the craggy coastline of Vinalhaven required a bit more finesse in deciding where specific bits of litter were placed.

Filling in the silhouette used about 20 of the 100 bags of trash collected. The remaining 80 bags were placed in a ring around the island, framing the collage. At last, the rest of the school was invited out to see the work of art.

The event culminated in a group photo, taken by freshman Gil Creelman from the air using a drone. The photo will be used on magnets to be distributed with the project’s slogan, “Why Trash Our Treasure?” and include the town dump hours. 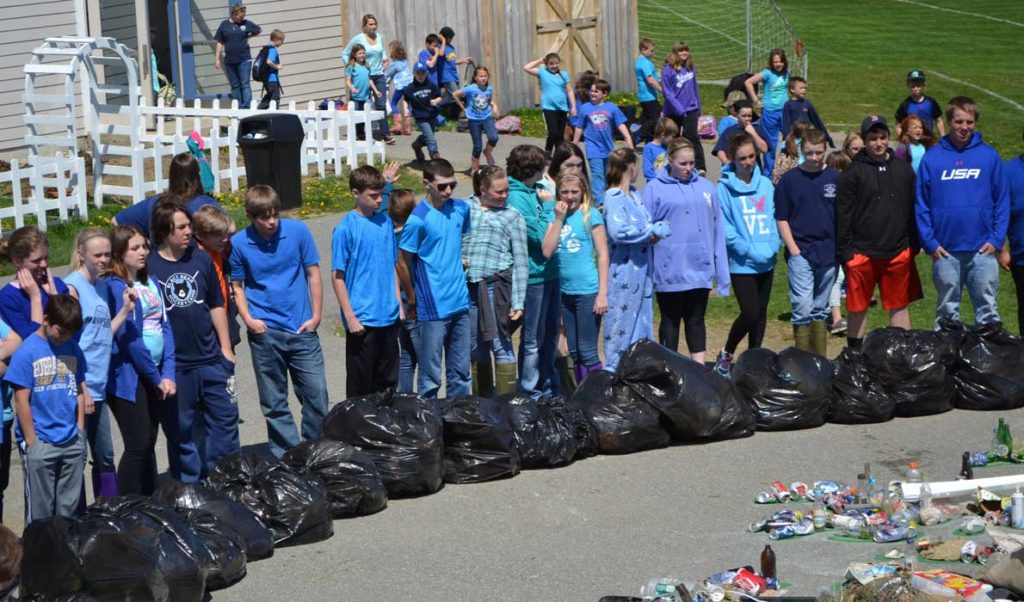 Vinalhaven school students and staff start to congregate outside around the trash collage and spend some time considering all the trash they collected.