Margaret Wise Brown, author of such children’s classics as Goodnight Moon, The Runaway Bunny and The Little Island, had a deep love for Vinalhaven. In fact, the home she bought on Long Cove is the only house she ever owned.

Perhaps that’s why she called it the Only House.

Brown entertained many guests in the Only House, among them several of the illustrators of her books, including Clement Hurd and Leonard Weisgard. In all, Brown spent 14 summers on Vinalhaven, until her untimely death in 1952 at the age of 42. It is this connection between Brown and Vinalhaven that will be celebrated in August during a week of Margaret Wise Brown events sponsored by the Vinalhaven Land Trust, in partnership with Hollins University in Roanoke, Virginia and the Vinalhaven Reads program.

“The goal is to share the experience with people of what it meant to [Brown] and what it means to us today to be here,” said Jim Boone, chairman of the Vinalhaven Land Trust Walks and Talks Committee.

“The things that so moved Margaret Wise Brown about Vinalhaven are the same things that draw people to the island now,” he said. “We are all here for the same reasons.”

Margaret Wise Brown week will be hosted Aug. 15-19 on Vinalhaven.

Featured events will include a Monday morning talk with adolescent therapist Tina Cohen titled “Margaret Wise Brown: What Children Experience in her Books,” and a Tuesday evening talk about “The Journey of Margaret Wise Brown’s Life and Work,” by Candice Ransom, professor of children’s literature at Hollins University, Brown’s alma mater, and a devotee of Brown’s work.

Wednesday will feature a walk, led by Boone, to the Only House. Two hands-on workshops are scheduled for Thursday: a writing workshop titled “Stars and Pins and Crumbs of Cake: Writing Poetry and Picture Books” with Ransom and a watercolor workshop called “Watercolors in the World of Margaret Wise Brown” with Ruth Sanderson, director of the MFA in Children’s Book Writing and Illustrating program at Hollins University. Brown biographer Amy Gary will speak on Thursday evening about “Margaret’s Maine.”

Friday will round out the week with a Margaret Wise Brown Read-along Story Time for children of all ages, sponsored by the Vinalhaven Reads program.

Vinalhaven Land Trust, in conjunction with Vinalhaven Reads, expects to open a new “story trail” to coincide with Margaret Wise Brown week. The story trail will simultaneously promote literacy and spending time outside. Brackets displaying the pages of a storybook will line the trail so that families can read a book while they hike. The trail will be dedicated to Margaret Wise Brown, and the first book featured will be The Little Island.

According to Linnell Mather, Vinalhaven Land Trust executive director, the story trail allows children to run “and be kids,” as opposed to other areas where hikers may prefer to enjoy nature a bit more peacefully.

Brown wrote over 100 children’s books in her short career, some under the pseudonym Golden MacDonald, a local caretaker with whom she had become friends. The Vinalhaven Historical Society’s summer display features Brown, with mention of MacDonald. The centerpiece of the display is the rowboat Brown used at the Only House.

Brown spent much of her time on Vinalhaven on the water. She once said, “I am healthy and happy as a cricket howling, rowing boats and carrying buckets of water and painting pictures.”

Boone noted that the Maine State Ferry service schedule makes it possible for those interested in coming from the mainland to attend the daytime events, as well as visiting the Historical Society, to do so between boats. All events start at the Vinalhaven Land Trust, a short walk from the ferry terminal.

The full schedule and contact information can be found at vinalhavenlandtrust.org.

“This week of activities will immerse everyone in the life of a person who truly has touched, through her books, each of us who have sat with a child reading Goodnight Moon, The Little Island or any of the hundred other books and songs she wrote in her brief life,” said Boone. 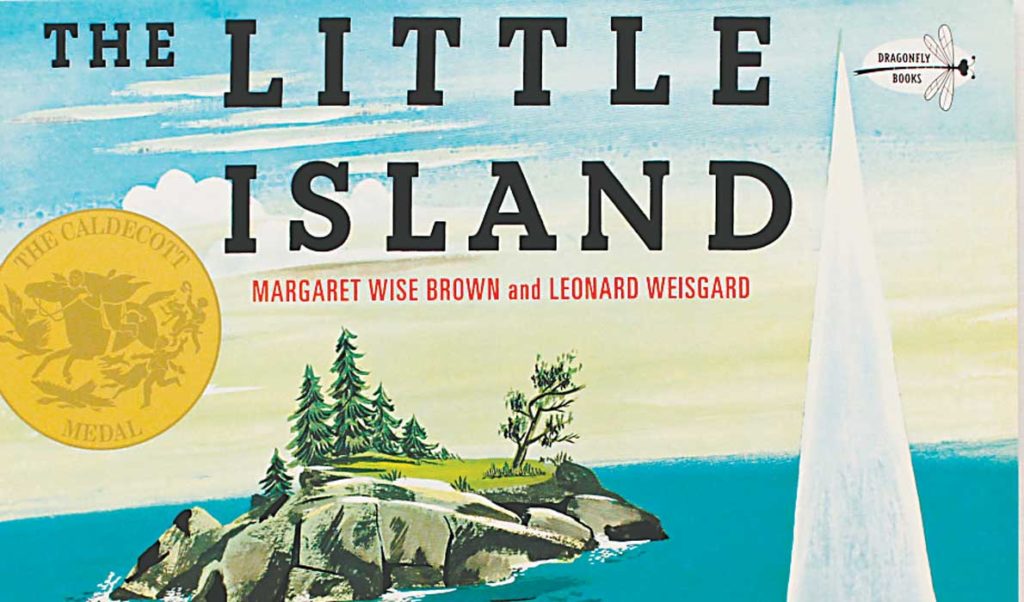