Vinalhaven artist Chris Clarke is having a fabulous year.

Clarke was recently approached by the Farnsworth Art Museum to loan two of his pieces for its current exhibit, “The Art of Disaster,” and in August, he celebrated the 10th anniversary of his Engine House Press.

“It’s thrilling,” says Clarke of having his work displayed at the Farnsworth. “I’m still surprised, still kind of numb over the whole thing.”

While planning for the show, organizers at the Farnsworth called Clarke out of the blue wanting to see his etching of the Royal Tar, a steamship that burned and sank off the Fox Islands in 1836 with a menagerie on board. Apparently a friend had alerted museum staff about Clarke’s work.

When they visited Clarke’s studio to see the piece, “The Legend of the ROYAL TAR,” they also noticed Clarke’s etching of the World Trade Center, titled “10048,” after the building’s unique zip code. Eventually Clarke was asked to loan both pieces for the current show, which runs through April 2017.

Prior to moving to Vinalhaven, Clarke, 45, spent seven years working in print shops in New York City. He worked for several different artists there, whom he had met at Pat Nick’s Vinalhaven Press in the 1990s while visiting the island during summers. During his time in New York Clarke was able to perfect his skills as a print maker.

“Three masters took me under their wings,” he said. “I was very fortunate to learn different techniques of doing the same thing. Then I developed my own way. I was in an environment where I couldn’t really screw up. [The work] had to be clean, efficient, because it’s their money. These guys took risks taking on a kid like that.”

Within the realm of print making, Clarke has settled mainly on etching as the medium for his personal work. He said he always liked to draw, and that skill comes through in the intricate etchings he produces.

“I like the physical aspect of it, what you can do with the surface of the plate to get different tones,” he said. “I love how long it takes to do an etching. I zone out, turn on some music and do the tedious work.”

The Engine House Press, according to Clarke, is a more democratic print shop than most.

“Anybody who wants to make a print can come in,” said Clarke. “There’s no caliber too small or too high. That’s very rare for a print shop.”

There is a per-hour fee for casual printers, or artists may pay a yearly fee to become a member of the press. Current members include Janet Gohres, Peter Codella, Esther Eder, Kitty Wales and Michelle O’Keefe, among others. Clarke has worked with novices as young as six years old as well as seasoned artists such as Robert Indiana.

Clarke shies away from the title “master printer,” but rather considers himself the “captain of the ship.”

“I hate to call myself ‘master printer’,” he said. “I’m just a regular guy who likes to make prints with other people and make people happy.”

While hitting the 10-year milestone might be a sign of steadfastness to some, Clarke maintains a “you never know” attitude about the future of the press. 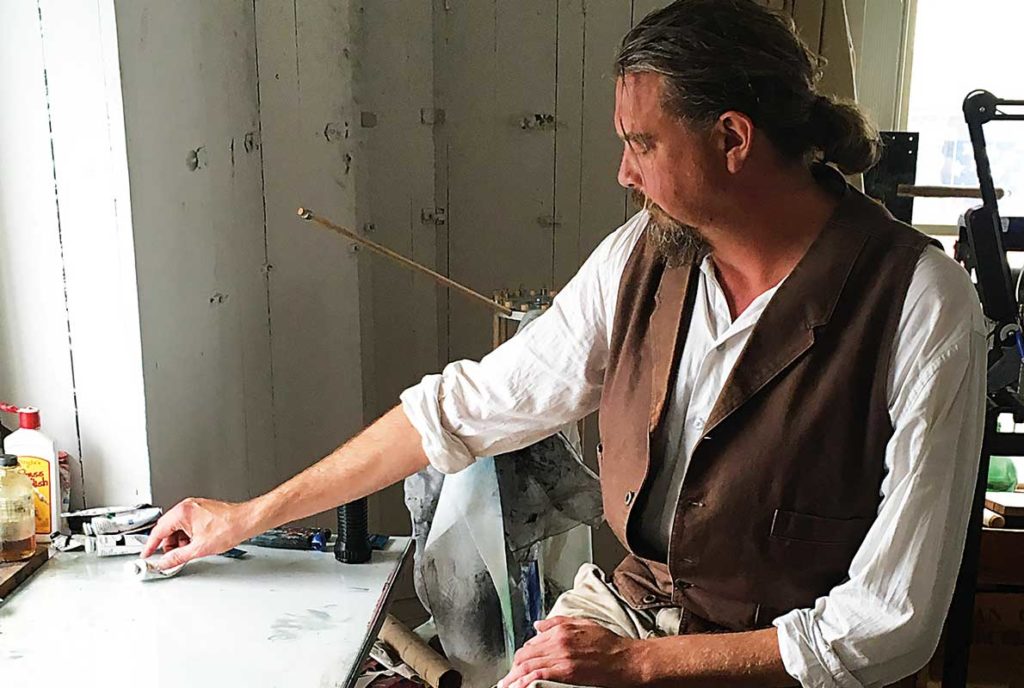