The Women’s March on Washington, a concept begun by one woman and a handful of friends just after Election Day, far exceeded their expectations. Two months later, it had become the distinctly inclusive voice of an astonishing five million people from every continent and from every state in this union.

Among those were 76 women and men, girls and boys, and some who unflinchingly blurred the lines, who mustered Saturday, Jan. 21 on Vinalhaven to demonstrate solidarity with those millions who similarly and simultaneously gathered to march on Washington in fact or in spirit.

It’s significant to note, but not difficult to understand, that the moving force behind the gathering was island native Pam Alley. If one were to have listened to the loudest voices during this last year, the perception of political persuasion out here near the edge might have been shaped by too much noise made by a few who were troublingly inspired by Trump’s contemptible behavior during the campaign.

Pam, a member of the island town select board and a historically participatory community member, is the grandmother of seven girls and the great grandmother of three boys. Given the future they all faced, she “had no choice,” she said, and, wanting to go to Washington for the big event but finding that difficult, chose to put our island’s sentiments on the map.

As a result of her efforts, Vinalhaven was one of several Maine communities to host an officially registered sister event to the march on Washington (See: https://www.womensmarch.com/).

Among the island marchers was a couple sufficiently concerned about the national direction to have brought along their several children ranging in age from two to 19 years, and a lifelong Republican disheartened by the degree to which his party has strayed from principles he once admired.

When the march passed by some in-town apartments, an older lady who, in the past, had protested vociferously against the politics of most of these participants, joined in—this time waving her small flag in support. Another helpfully declared Jan. 20 a “bad hair day.”

It’s important, too, to acknowledge that this and the other women’s marches around the world—historic reminders of the millions who will be alert and vocal if the promised specter of discrimination, misogyny and contempt becomes a reality—took place the day after the new president was sworn in.  Had it taken place on Inauguration Day, the march would have been counterproductive and rightly viewed as disrespectful of the democratic process. Instead it was, while a legitimate and fully deserved caution to the incoming administration, entirely in keeping with the freedoms promised by our democracy.

The mission of the women’s march is inclusivity, to ensure protection of the rights, safety and health of us all—particularly those marginalized and promised to be marginalized even further by this president—without exception. Those sentiments were manifest in the free-form expressions of Vinalhaven marchers whose signs called attention to women’s bodies being their own; to the need to pay serious attention to the health of our environment; and to seeing that the LGBT community, minorities, immigrants and others are treated justly and fairly if the United Sates is to continue or even survive as the free and functioning democracy we have all been promised.

Phil Crossman lives on Vinalhaven where he serves as a member of the select board and owns and operates the Tidewater Motel. 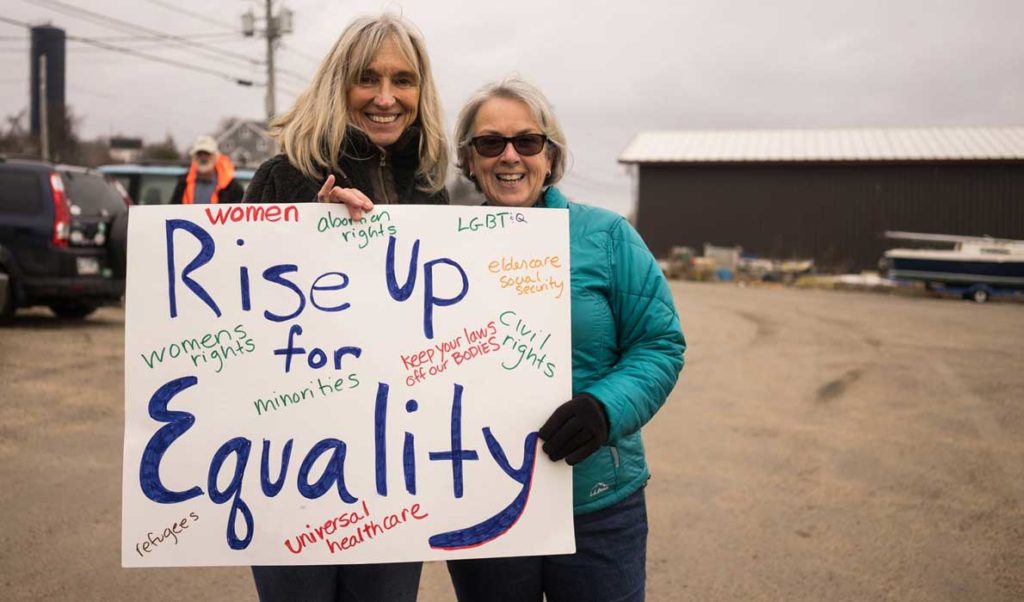 The women's march on Vinalhaven.