Scientists with the U.S. Geological Survey, U.S. Navy, University of New England, and Maine Department of Marine Resources have documented that both Atlantic and shortnose sturgeon use the Piscataqua River, making short forays into the estuary between April and November. Some of the sturgeon go on to spend the summer in the Kennebec and Penobscot estuaries.

This information will be shared with NOAA Fisheries as it conducts the five-year review for the threatened Gulf of Maine distinct population segment of Atlantic sturgeon. The Endangered Species Act requires the agency to conduct reviews to ensure that the current “threatened” classification of the species remains accurate. NOAA seeks information on population trends, distribution, abundance, habitat amount and suitability, threats, and conservation measures for Atlantic sturgeon in the Gulf of Maine.

One of the most heavily dammed rivers in Maine, the Mousam River, has a history of migratory fish runs including shad, alewives, and brook trout as well as human industry. Today, dams that once powered mills to make blankets for Civil War soldiers are in need of repair and blocking fish. The relicensing process is underway but its trajectory is uncertain.

America First Hydro of Scarsdale, New York (a.k.a. Dichotomy Capital) filed a notice of application with the Federal Energy Regulatory Commission after the current operator Kennebunk Light and Power decided not to proceed with relicensing because of the aging state of the dams and potential for power production. FERC conducted a scoping meeting and environmental site review in December and is currently reviewing materials submitted by America First.

Lots of people and groups have been working on Saco River issues over the last decade, learning that one-third of all bird species in Maine use the marshes, and that the estuary has the highest documented fish diversity of any river in Maine. Now, they have formed a Watershed Collaborative to expand beyond the estuary, coordinate water quality monitoring, and include the entire watershed all the way to the slopes of Mount Washington.

Androscoggin River Watershed Council’s annual Source to Sea program covered the 170-mile journey down the river. The council is working to establish a water trail along the full length of the Androscoggin River from Lake Umbagog in northern New Hampshire to the easterly end of Merrymeeting Bay in Maine. A new trail guide, still in development, maps more than 40 publicly available access sites to the river. Maps are available online and at kiosks at popular access points.

The Bangor High School Stormwater Management Research Team monitored nine sites along the Kenduskeag Stream in Bangor and found that stormwater runoff has an impact on water quality, especially in the tidal portion of the river that flows through downtown. A tributary, Arctic Brook, has been listed as water quality impaired for not meeting “Class B” aquatic life use standards.

With two new fishways constructed in the last year, the Bagaduce River watershed is set to welcome tens of thousands of alewives. A new viewing platform and picnic area at Pierce’s Pond provides access to see the fish run; at Wight’s Pond, boats can be launched in the company of migrating fish. The towns of Penobscot, Sedgwick, and Brooksville are working together to continue to restore the watershed, conserve lands, and provide access for native fish species. 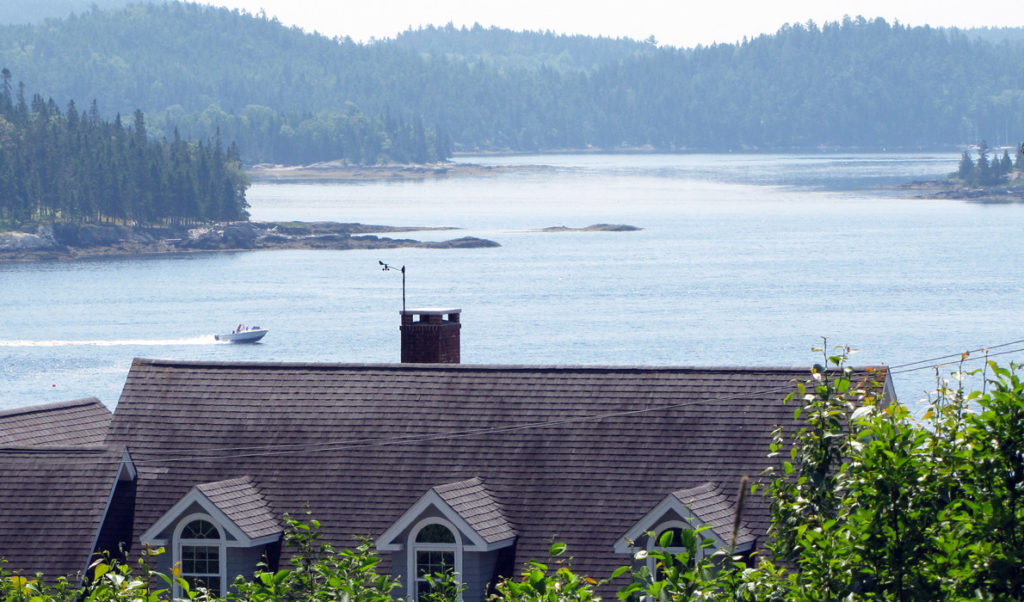 A view of the Bagaduce River over Castine rooftops.

We spoil our food with best-by dates