Roger Pielke had come to Maine to speak at the University of Maine’s Mitchell Center for Sustainability, traveling to the state from Colorado, where he is director of the University of Colorado’s Center for Science. After speaking, he hoped to head to Bar Harbor to see Acadia National Park and dine at one of the seaside town’s restaurants.

Pielke used the question to illustrate the central themes of his Oct. 15 talk, “When Science Meets Politics: Symphony or Slugfest?”

In the restaurant scenario, he is the “decider” and locals are the experts.

If pure science were to guide the restaurant choice, a local might hand him a copy of the USDA’s guide to dietary health. But that’s not much help.

Another approach would be to suggest three or four restaurants that serve lobster on the water, which he described as “science arbitration.”

Another local might send Pielke and his wife to McDonald’s. Such a recommendation smacks of an agenda, though; does the person making the recommendation own stock in the company? Does his nephew work there? This, Pielke said, is an example of issue advocacy.

“All of these roles are important in society,” Pielke said, “but some are more important than others.”

With critical issues in the public forum hinging on science, such as climate change, green energy and child vaccination, “We need a more nuanced, sophisticated understanding of science and politics,” he said.

Those nuances aren’t always easy to see, though.

As passengers board a plane, there isn’t a discussion among them on who will fly it; it’s left to the expert, the pilot. But while science might dictate the best place to site a wastewater treatment plant, the policy makers would do well to listen to community concerns in making the decision, Pielke said.

“It is important to discuss the roles and responsibilities when scientists engage with decision makers and the public,” he said.

After Hurricane Katrina devastated the Delta area, Pielke was asked by the insurance industry to join a panel that ranked the likelihood of category 3-5 hurricanes making landfall in the U.S.

Each member studied computer models and made endorsements, but did not use 120 years of historical data in deliberations. As a result of the predictions, insurance premiums were raised by $82 billion, yet since 2005, no category 3-4 hurricane has made landfall in the U.S.

“We love experts, and sometimes we love experts a little too much,” he said. “We need to have an open discussion about how we see our roles.”

Many on the political left decry the dismissal, by conservatives, of what they see as scientific facts on climate change and evolution. Pielke showed slides illustrating some high-profile examples, such as Sen. Jim Inhofe holding up a snowball on the floor of the U.S. Senate as evidence that climate change isn’t happening.

Another right-left conflict recently emerged on gun control. The Centers for Disease Control wants to research gun-related deaths as a public health inquiry, but Republicans in Congress blocked what would have been a data-based study.

And both sides dance around science and data.

As part of its push for approval of the trade pact Trans-Pacific Partnership, the Obama administration asked the State Department to downgrade its rating of some of participating nations on the matter of human trafficking.

Another example is the European Commission’s treatment of its chief scientific advisor, Anne Glover, on the issue of genetically modified organisms (GMOs). Glover asserted that available science shows no health risk comes from consuming GMO wheat, corn and other products, but that conclusion did not sit well with the commission. The commission’s next president fired her.

“Politicians love science,” Piekle said, because “There’s a range of results that are plausible in science,” making it may easy to cherry pick to suit a position.

Pielke concluded with a paraphrased quote attributed to early 20th century commentator Walter Lippmann, who argued the goal of politics is not to get people to think alike, but rather to get people of different views to act alike. 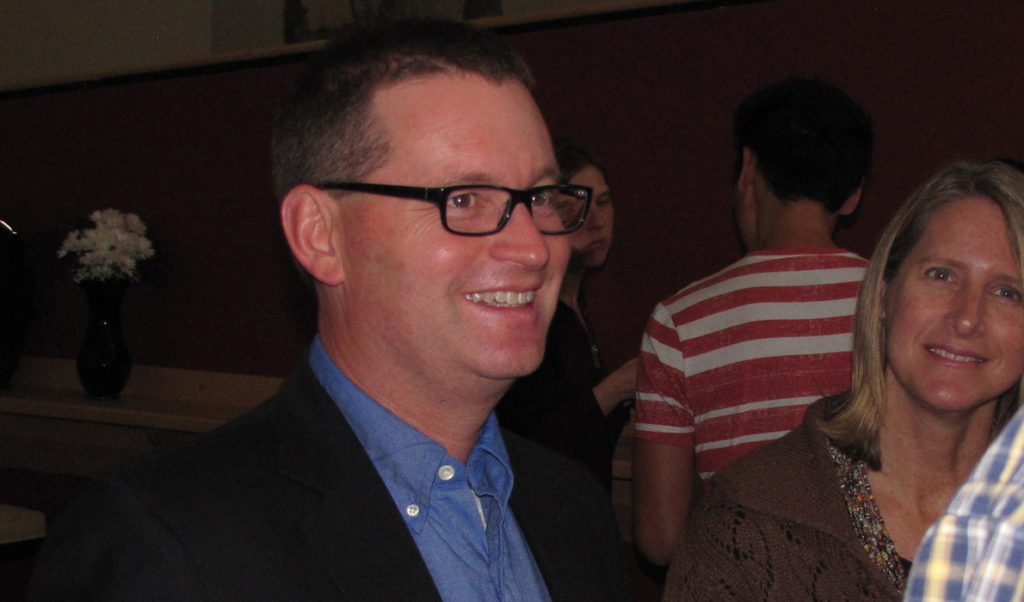 Roger Pielke at a reception at the University of Maine