A first-time visitor to Unity College’s annual “green” career fair might be confused.

The gymnasium at the western Waldo County college was peppered with well-groomed men and women in uniform. But young men and women with longer hair, sporting flannel shirts and jeans, also lined the aisles, ready to explain the jobs they want to fill.

The small private school, with a student body of about 675, bills itself as “America’s Environmental College.” Students major in such subjects as conservation law enforcement, aiming at careers as game wardens, park rangers and police officers. But the college also offers a wildlife biology major, which leads to careers in environmental advocacy and stewardship.

Both types of students see themselves as environmentalists, though one group may include avid hunters, and the other, vegetarians.

“We’ve met some really great individuals at Unity in the past,” said a staffer from the U.S. Fish & Wildlife Service’s Rachel Carson National Wildlife Refuge. The refuge, which includes properties from Kittery to Cape Elizabeth, is hoping to hire four summer interns and a coordinator for its Youth Conservation Corps program.

Bri Benvenuti, a Unity College alumnus, is a biologist at the refuge.

“We look for people who are passionate about their field,” she said, and since the jobs require public interaction, they also look for good communication skills.

Several state parks and summer camps were represented at the fair, including Incarnation Camp, of Ivoryton, Conn. It’s the oldest continuously operating co-ed camp in the country, said Nina Orellana, dating back to 1886.

She was seeking counselors and a trip leader to guide camper excursions on the Connecticut River and elsewhere. Another staffer at the camp, Kelsey Tuttle, is a Unity graduate.

This year was the first time the Lisbon police department hosted a table at the fair. Chief Marc Hagan said he wanted to raise the department’s visibility, especially given the struggles many municipal departments face hiring officers.

“We just had an opening,” he said, and though that position has been filled, the chief hopes to have students thinking about his department as a career choice in the future.

Hagan remembered the Brunswick police receiving 94 applicants for an opening in 1990; the recent opening in Lisbon generated just 11 applicants.

Should another job open after Unity College students graduate, the timing would be right for a new hire to attend the August session of the Maine Criminal Justice Academy, he said.

Nathan Williams, a 2014 Unity grad, and Michael Capponi, a 2016 graduate, represented the Maine National Guard at the fair. Joining the Guard means making a commitment to attending basic training, job-specific training, and then serving one weekend a month and two weeks in the summer, Williams said.

Those as young as 17—with parental permission—can sign up. Joining as a college student makes sense, too.

“It goes well together,” Williams said of serving in the Guard and being a student. The National Guard offers tuition assistance.

Employers more closely associated with “green” jobs also were represented, such as Jared Coyne of the Appalachian Mountain Club, who was looking to hire for trail crews. Crews are needed for three sessions: mid-May to mid-August, late August through the end of October, and through the winter.

The crews live in tents on the trail for ten days at a time, then get four days off. Their base camps are in the Moosehead Lake area.

Unity College has its own trail club, which builds and maintains trails on and near campus, Coyne said, so he was optimistic about finding recruits.

“Their trail crew club here has some awesome individuals with a lot of experience,” he said.

Danielle Tetreau, a 2003 Unity grad, represented Stantec Consulting of Topsham, a firm that offers clients environmentally sensitive designs. She majored in wildlife conservation, which has transferred to her job.

“You have to learn how to ‘read’ the landscape,” she said of her work.

“I learned to speak with professors and peers,” she said, which helped build her confidence, and enjoyed the collaborative nature of the classes.

Colleen Fogarty, a 21-year-old junior at Unity from Lakeville, Mass. was looking for a summer job. The conservation law enforcement major was hoping for a position at state park near her home.

“I feel like I’ll get a job pretty easily,” she said.

Another recruiter, Anna Mueller of the Maine Organic Farmers and Gardeners Association—and a 2014 Unity grad—was looking for interns to place at area farms. She echoed Tetreau’s observations about her education.

“It’s totally different than any other school,” she said.

The Brookings Institute in 2011 reported that the “green” sector employs some 2.7 million people, with median wages 13 percent higher than the overall median wage. 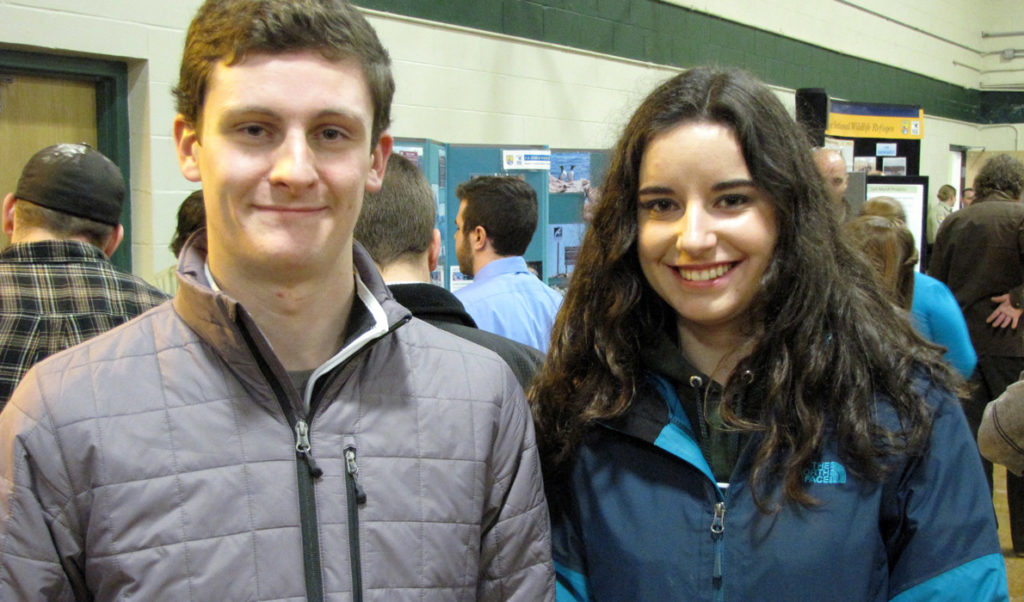