Coral reefs make up less than 1 percent of the ocean floor, yet they provide shelter for as much as a quarter of sea life.

“They’re a huge keystone ecosystem for the ocean,” explains Clair Aldrich, a senior at the University of Maine at Machias. “They’re so important.”

So important—especially now that climate change is threatening them—that Aldrich proposed a project to find ways to effectively and efficiently grow coral in tanks. And that’s just what she is doing, with oversight from Gayle Kraus, a marine ecology professor at the college.

Aldrich, 21, isn’t growing coral to transplant into the ocean, but rather to supply pet stores, which in turn sell it for use in aquariums. That might seem like a drop in the ocean, but both student and professor explain that the pet store market is a serious threat to wild coral reefs.

“It’s huge,” says Kraus. “We should be thinking in terms of culturing,” and not harvesting coral.

Aldrich, who hails from Freeland, Michigan, worked on a similar project while she was in high school and taking an online oceanography class. At UMaine Machias, her work continues in two 55-gallon aquarium tanks along a wall in a classroom.

She and Kraus explain their approach to growing coral is different in that rather than using metal halide lights, the tanks are lit with LED bulbs.

Those metal halide lights “are really hot and dangerous,” even posing fire risks, Aldrich says. LEDs are less costly to purchase, and use far less electricity.

“You have to have light to have happy algae,” Kraus explains, and the corals need algae growing on them. The algae provide the corals with energy.

“It’s a kind of nutrient,” Aldrich said, with the coral and algae working together in a symbiotic relationship.

One draw-back in using LEDs, she adds, is that they seem less effective in producing the brightly colored varieties.

Another wrinkle in their work comes in managing the water in the tanks. Regularly replacing most of the water is necessary to keep the tank healthy, but it can stress the coral because “invariably, you’ve got water that’s not balanced,” Kraus says.

“I change maybe two to three gallons every two weeks,” Aldrich says, which mitigates fluctuations in pH, nitrates, phosphates and ammonia levels, all of which are critical for algae and their host corals.

Though the college is close to open ocean, Aldrich uses tap water that’s warmed for 24 hours into which concentrated brine is added.

“It’s turned out to be an extremely effective way to grow the coral,” Kraus said of the process she and Aldrich are using.

Because of higher carbon levels in the atmosphere, the oceans are becoming more acidic, a process known as ocean acidification.

The white coral aquarium owners see in stores is beautiful, Kraus says, “But it’s dying.” That “bleaching,” as it’s known, occurs when the algae that lives on the coral begins to die.

Those pretty corals that aquarium owners want in their tanks can be big-ticket items, too, with larger pieces selling for $100 to $300.

And that’s where Vance Peters comes in. Peters has owned and operated Vance’s Tropical Fish and Exotic Pets in Bucksport for 25 years.

“I’ve known Gayle for a long, long time,” Peters says of the UMaine Machias professor. The college has purchased coral for experimental and study purposes, and now Peters takes the coral grown by students in trade.

The cultured supply is so steady, he notes, “I rarely have to order the wild stuff now.” That wild coral typically comes from Vietnam and Indonesia.

Machias is a long way from those sources. The nearest coral reefs are in Florida, Kraus said.

“But we do have corals in the Gulf of Maine,” just not those that form reefs.

Aldrich, who may pursue an advanced degree after she graduates in June, has developed more than a clinical relationship with her subject.

“I guess I’ve learned how to ‘read’ them,” she says. “Corals are kind of finicky.” When she cuts off a branch to propagate elsewhere, they will close up for a week, recovering. She also notices that placement in the aquarium has an effect on their vitality.

She has written a manual on growing and propagating corals for future marine biology students. 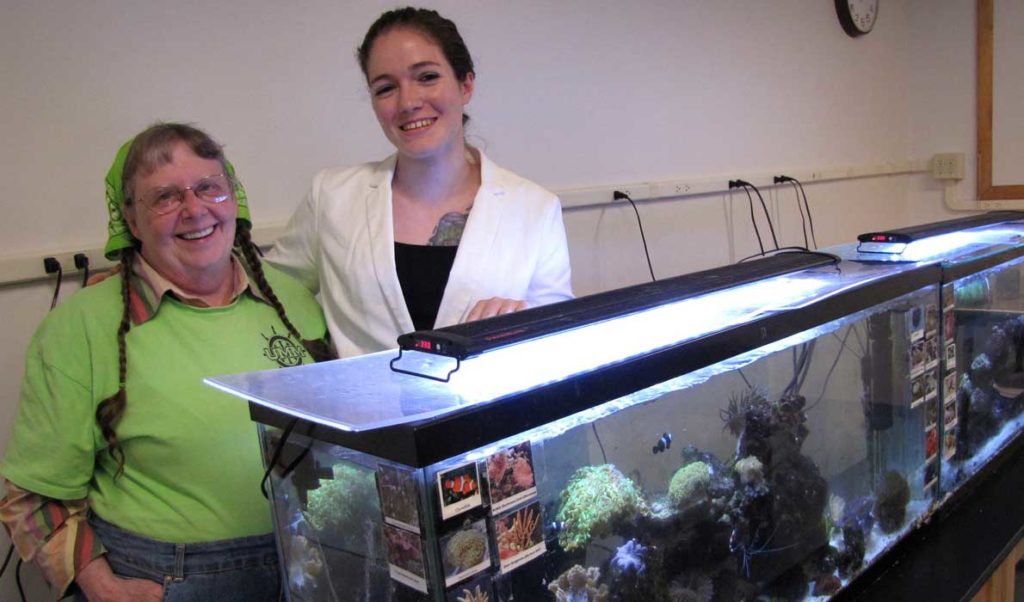