The University of Maine will collaborate with New England Aqua Ventus, LLC (NEAV), a joint venture between Diamond Offshore Wind, a subsidiary of the Mitsubishi Corporation, and RWE Renewables, the second largest company in offshore wind globally, to develop UMaine’s floating offshore wind technology demonstration project off the coast of Maine.

As the developer, NEAV will own and manage all aspects of permitting, construction and assembly, deployment, and ongoing operations for the project. UMaine’s Advanced Structures and Composites Center will continue with design and engineering, research and development, and post-construction monitoring.

The project will consist of a single, semisubmersible concrete floating platform that will support a commercial 10–12 megawatt wind turbine and will be deployed in a state-designated area two miles south of Monhegan Island and 14 miles from the coast.

The demonstration project will evaluate the floating technology, monitor environmental factors, and develop best practices for offshore wind to coexist with traditional marine activities. It will supply clean, renewable electricity to the Maine grid.

Construction, following all permitting, is expected to be completed in 2023.

The state’s congressional delegation issued a joint statement in support of the partnership: “For generations, Maine has been a national leader when it comes to using our natural resources sustainably to create jobs, protect our environment and power our economy. The University of Maine’s floating deep-water offshore wind project carries on that tradition. We have strongly supported UMaine’s development of the Aqua Ventus project.”

An immediate priority for the new development team is to engage with the fishing industry, other maritime users, coastal communities, and other interested parties on how to ensure this new renewable energy source can optimally provide economic growth to Maine and work with maritime industries.

Since 2008, the University of Maine has researched floating offshore wind technology as a solution to Maine’s overdependence on imported fossil fuels. After winning funding from the U.S. Department of Energy, the university worked with Maine-based construction firm Cianbro to build and deploy the first grid-connected offshore wind turbine in the U.S. in 2013, a one-eighth scale prototype of its VolturnUS floating hull technology. The success of the project led to additional funding from the DOE to further advance the VolturnUS technology, which has been issued 43 patents to date.

The university and Cianbro sought to partner with a world-class offshore wind developer to further demonstrate this technology on a commercial scale. UMaine will continue to own its VolturnUS floating hull intellectual property and license it to NEAV for this project. 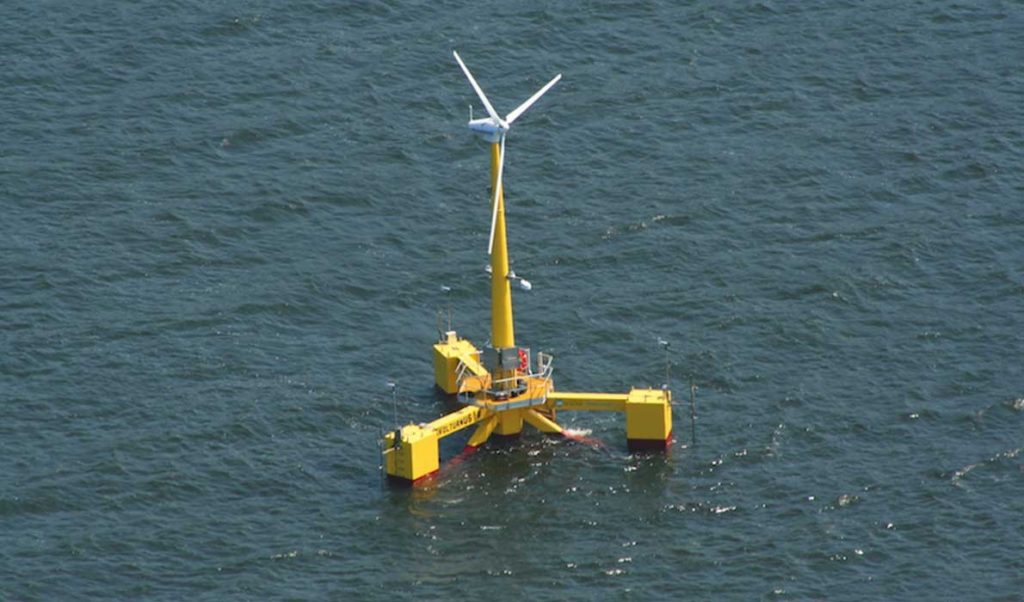