Angela Myracle’s research is going to the dogs. Or, more accurately, for the dogs.

As a scientist with Maine EPSCoR’s Sustainable Ecological Aquaculture Network (SEANET), Myracle looks for innovations in aquaculture. And when the assistant professor of human nutrition at the University of Maine spied dog treats at a local supermarket that were made with lobster from Iceland, she thought, “What about dog biscuits made with green crabs from Maine?”

If the novel idea becomes a market reality, Myracle says it could be a win-win-win situation.

Voracious green crabs are decimating Maine’s clam population, threatening the livelihoods of clammers, and clogging lobster traps. Female green crabs lay about 185,000 eggs a year, according to Fisheries and Oceans Canada. And one green crab reportedly can devour 40 half-inch clams in a single day.

So if a business entrepreneur cooked up natural, nutritious green crab treats for dogs, Myracle says people who earn their living on the sea and mudflats might be incentivized to harvest green crabs as bycatch to earn additional money.

Which would result in green crabs (Carcinus maenas) being removed from the environment. But would the treats pass the sniff test?  Would pups find that dog biscuits made with green crabs are a treat?

“They woofed it down,” she says.

Myracle and undergraduate Anna Smestad, a human nutrition and pre-med major, are continuing to experiment with ingredients and the baking procedure. Currently, they cook about 10-15 crabs—shell and all—for as long as 90 minutes, then mash them. They mix the resulting crab meal with whole wheat flour, then bake it.

Myracle and Smestad also are continuing to examine the digestibility of the biscuits, as well as their nutritional value, texture, and pliability.

“It’s about taking a simple idea to solve a complex problem and help the Maine economy,” says Myracle.

Dogs are part of the family, she says, including for tourists looking to give their furry friends a delicious treat from Vacationland. 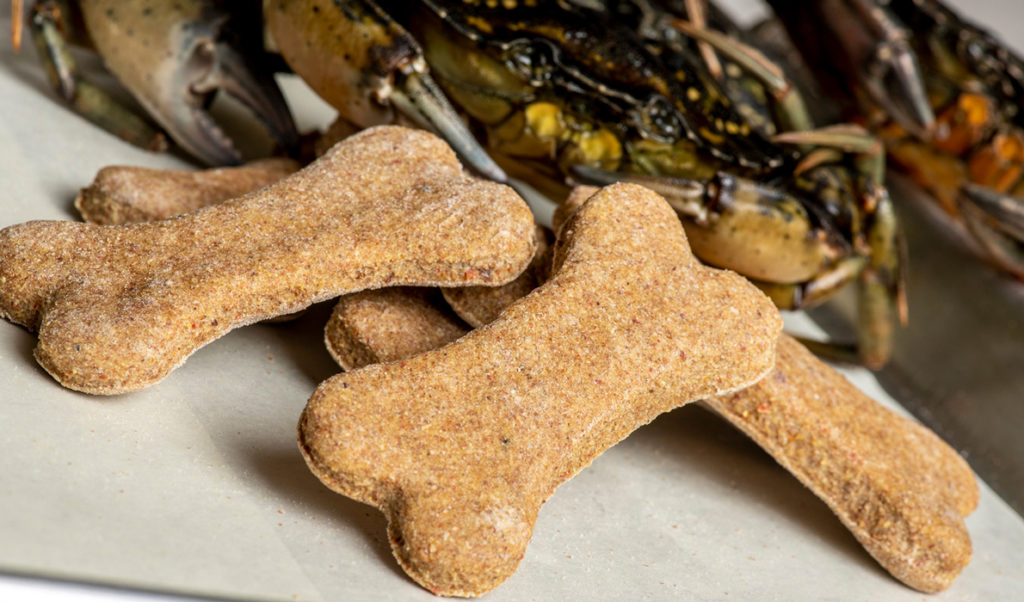