Imagine stumbling onto an undeveloped shoreline. Protected by islands, this mile-long waterfront has deep water at one end and a gravel beach at the other. If that shoreline were to be developed for various maritime uses, how would you organize it?

Portland’s waterfront developed the way most have, with ever-changing forces and demands shaping it into what we know today. But if you were to start with a blank canvas, you’d be hard-pressed to improve upon it.

City officials aren’t complacent, though. They are shepherding two projects that will change the waterfront’s face and function yet again—the development of the Portland Co. building and property, and establishing a small public-access area nearby.

Bill Needelman, the city’s waterfront coordinator, traces the most recent wave of waterfront evolution from the 1980s. There had been railroad connections at both ends of Commercial Street, but by the ‘80s, that transportation mode declined and so had the attendant industrial uses.

Today’s trendy Old Port, Needelman says, smelled bad, looked bad and was dangerous to walk through at night. Ground fishing also was in decline, and piers were literally falling apart because their owners weren’t getting enough revenue from them.

A line was drawn when condos were built on one of those piers. The community began to reflect on its past and what it wanted for the future.

“It made us face the fact that we were a port community,” Needelman says. Residents adopted a five-year moratorium on non-marine uses on the waterfront. “The organization of uses we see now grew out of that moratorium.”

A coalition emerged to save the working waterfront and a report it issued in 1992—as the moratorium expired—led to steering different uses to appropriate areas. The industrial shipping area remained at the western end of the peninsula, with a liquid fuel terminal and container port. Continuing to the east are the 19th century finger piers, most of which supported fishing activities. But fishing wasn’t paying the bills. A compromise emerged.

“The compromise was prioritizing marine uses, but allowing other uses to spur investment,” Needelman said. So those piers now have retail and tourism-related businesses as well as allowing fishing access.

In 1998, BIW left the waterfront land it was leasing. “We studied the area and the city made the decision that the eastern waterfront would be the passenger port,” he said.

And so Casco Bay Lines is ensconced in a recently upgraded building at the foot of Franklin Street, and nearby is Ocean Gateway, the cruise ship and Nova Scotia ferry pier. Further east is a pedestrian path leading to a beach with a kayak rack.

In recent years, maritime-dependent requirements have been relaxed, Needelman said, because buildings were underutilized. Maine Wharf, just west of Casco Bay Lines, is the perfect example. The foundation had failed and buildings above were buckling.

Today, the wharf is home to the new Scales restaurant and art galleries, but water taxis, and tour and lobster boats also berth there.

The next big steps will come with the development of the large brick Portland Co. building and property, for which plans are now being finalized, and the development of a park-like space on the 1.5-acre lot last used by BIW. The city hopes to develop a public landing there for transient boaters (such as those living on islands); a place for a community youth boating organization to operate; and open space “for people who don’t own boats to participate passively,” Needelman says.

Portland’s waterfront is exponentially larger than any other in Maine, but its ongoing success in organizing and prioritizing uses imparts lessons for all coastal towns. 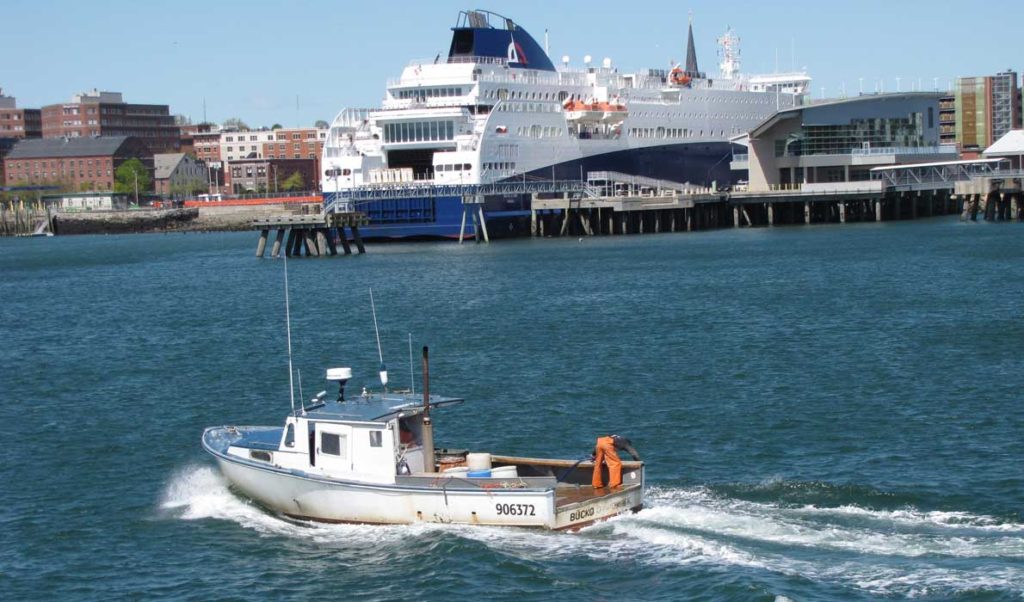 A lobster boat cruises through Portland Harbor with the Nova Star