What if the premise guiding most municipal economic development schemes were wrong? So wrong, in fact, that this basic assumption is to blame for much of the gap between tax revenue and infrastructure repair?

That’s the idea Chuck Marohn of Strong Towns, a Minnesota-based consulting firm, asserted during a session of the Community Institute in Brunswick on Oct. 22. The topic of the fall event, hosted by the Friends of Midcoast Maine group, was community economics.

Marohn, an engineer and planner, made the case that when municipalities welcome new housing subdivisions, business and industrial parks and big-box shopping plazas—and the new taxes, jobs and spending that come with them—it’s a bad bargain.

Sure, the mayor gets to cut a ribbon in front of a shiny new development and take a bow for ushering in growth. But when the town takes over plowing, paving and ditching the new roads, expanding capacity at the sewer treatment plant, adding police patrols and fire hydrants—and continues to pay for these services decade after decade—the new tax revenue fails to come close to covering those costs.

Marohn opened his presentation tracing the course of development from ancient Rome to the early 20th century in the U.S. A photo of his hometown of Brainerd, Minn., in 1905 showed a broad main street, with vehicle travel lanes clearly indicated, but also wide sidewalks and a transition zone between them. The two- and three-story brick buildings were equidistant from the curb.

After letting the audience take in the photo, Marohn asked, rhetorically, how thick that early 20th century town’s zoning ordinance might have been. The point, he argued, is that for most of history, development happened organically, but not haphazardly, because cities and towns followed patterns whose merit was proven in the past.

“They copied what they knew worked,” he said.

To gasps from the audience, he then showed a photo of the same street today—a mix of nondescript commercial and industrial buildings, surrounded by parking lots.

“This is exactly a huge experiment,” Marohn said of post-World War II development patterns in the U.S. The new buildings, roads and parking lots create “the illusion of wealth,” he continued.

“This is the answer to the question, ‘Why are cities going broke?'” he said. “We just have a bad business model.”

One case study he offered was a new housing development. The city’s cost for the new roads was $354,000, which means it will take 79 years to recoup that cost through the property taxes paid from new homeowners in the development. And that’s not counting the cost of repaving and repairing.

Another case study looked at an industrial park development. The payback from taxes on a $2.1 million project takes 29 years; better than the housing example, but still not a good deal, he asserted.

So what is the right way for a town or city to grow?

Marohn then showed a slide depicting Brainerd, this time from the 1870s. There were no signs that the 1905 orderly, bustling brick downtown would emerge, because the photo showed a dirt road with modest one-story buildings with wooden facades.

“Up and out,” is how the town grew, he said, which requires far less public investment.

Marohn then described a part of Brainerd where old buildings had been torn down and a new taco drive-through restaurant built.

The “new and shiny” development left everyone happy, he said. It met building standards, didn’t create on-street parking, featured grass and stormwater retention and a sidewalk.

He then contrasted this $803,200 “new and shiny” development with an older commercial strip, valued by the city at $1.1 million. The older buildings, some dating back 90 years, were single story, with inexpensive facades advertising businesses like barber shops.

Marohn said the older strip generates 42 percent more taxes, and that the assessed value declines by about 3 percent each year, while the fast-food place will lose about 23 percent in value annually.

In 20 years, the taco place will be a used car lot, then a meth lab, and finally, the city will seek a grant to tear it down, Marohn predicted. Big-box stores follow the same pattern, with Dollar Stores and the like taking up residence in former Walmart buildings, and so on down the food chain.

Audience members chimed in with suggestions to his question about improving the strip: benches, trees, pedestrian-scaled streetlights, improved facades.

Furthermore, he said, the old style street development is flexible. What is a barbershop today could be a pizza place next year and a tax office five years later. The take-away is that the old street needs very little public investment, and its future rises or falls based on the building owners and tenants.

Joe Minicozzi, a consultant with the firm Urban3, followed Marohn’s cost analysis with a revenue analysis. Though he mostly works in the South, he was hired by Friends of Midcoast Maine to help guide Rockland through its commercial growth.

Home Depot produced $500,000 in value per acre, while one building downtown—449 Main Street—produced $17 million per acre.

Minicozzi related how a Walmart official once boasted about constructing a “cheap, crappy building” designed to last 15 years. 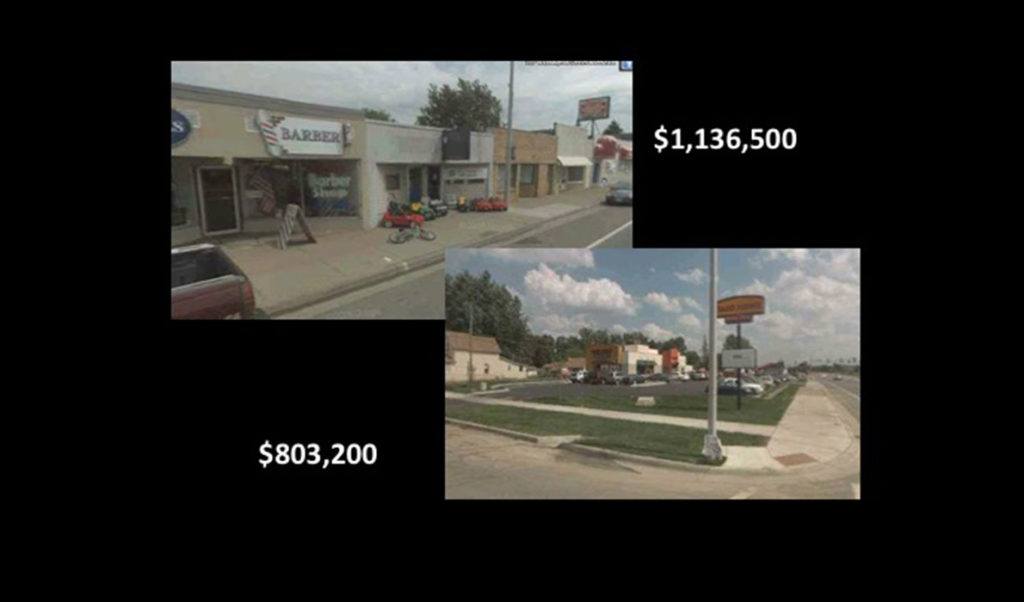