“Transport like no other” declared a sign posted more than 100 years ago on the Bath City Landing, directing visitors to board the steamboat Virginia. That sign is one of the items on display in a new steamboat exhibit at the Maine Maritime Museum.

It’s been more than 25 years since the museum did an exhibit on steamboats, said Chris Hall, the museum’s curator of exhibits. “Meeting the Boat: Steam Travel Along Maine Waters” opened June 4 in the museum’s John G. Morse Gallery. The exhibit is more a portrait of what it was like to travel by steamboat during the heyday of its use in Maine (1830 to 1930) rather than a celebration of the technology powering the boats.

The sign on the Bath City Landing displayed in the exhibit serves as a reminder that even though much attention is given to wooden sailing vessels in Maine, at one time in the state’s history, steamboats made a huge impact on the lives of those doing business, recreating and just living day to day.

Thus, visitors will see advertisements of recreational cruises, such as the one for a trip from Richmond to Augusta on the steamer Wiwurna with a round trip ticket price of 35 cents for adults, and paraphernalia of life and work on board, with items such as a ship’s steering wheel and steam whistle, dining room plate ware, postcards, photographs and life preservers.

The items, Hall said, offer “a real flavor of the continual presence [of steamboats] in people’s lives.”

Across the U.S., steamboats had transformed people’s lives and the way business was conducted. Freight and passengers could be transported more easily and more quickly by steamboat than by most other forms of transportation at use in the pre-automobile era.

Large steamers connected to smaller ones and the railroads connected to steamers, too, forming a vast transportation network making it possible for people and goods to get to and from hard-to-reach places, especially among Maine’s coastal communities where trains didn’t go, Hall said.

Tourists could travel to Maine from New York and Boston in what amounted to floating hotels, said Hall, and for those living in Maine’s coastal communities, steamboats were a link to the world, delivering people, mail and commodities as well making it easier and faster to ship out local products.

Steamboats dominated a variety of Maine’s waterways, not just the coast. They ferried lumberjacks north along the rivers and ran day excursions from lakeside resorts that featured entertainments such as live band music.

Hall said he hopes the exhibit will get people thinking more deeply about the role steamboats played in the everyday lives of people in Maine.

“They were really essential,” he said. “[On the waterfronts] they were always there—and then they weren’t. The automobile changed all that.”

“Meeting the Boat” runs through Sept. 5.

On display alongside “Meeting the Boat” is an exhibit recognizing a milestone for the maritime museum. In 1996, the maritime museum launched a comprehensive traditional boatbuilding program for 7th and 8th grade students. Each school year, two groups of students build a 12-foot flat-bottomed skiff. It was the first curriculum of its kind in the state. “20 Years of Discovery Boatbuilding” celebrates the program’s successes through photos, videos and personal stories from alumni and staff. The exhibit, in the Marjorie W. Kramer Gallery, is open through Sept. 18.

CHECK THIS OUT: In conjunction with “Meeting the Boat,” the museum has an online exhibit, “The SS Portland and the Great Gale of November 1898,” which tells the tragic story of the Bath-built and -launched steamer that wrecked of the coast of Cape Cod in 1898 with all lives aboard lost. 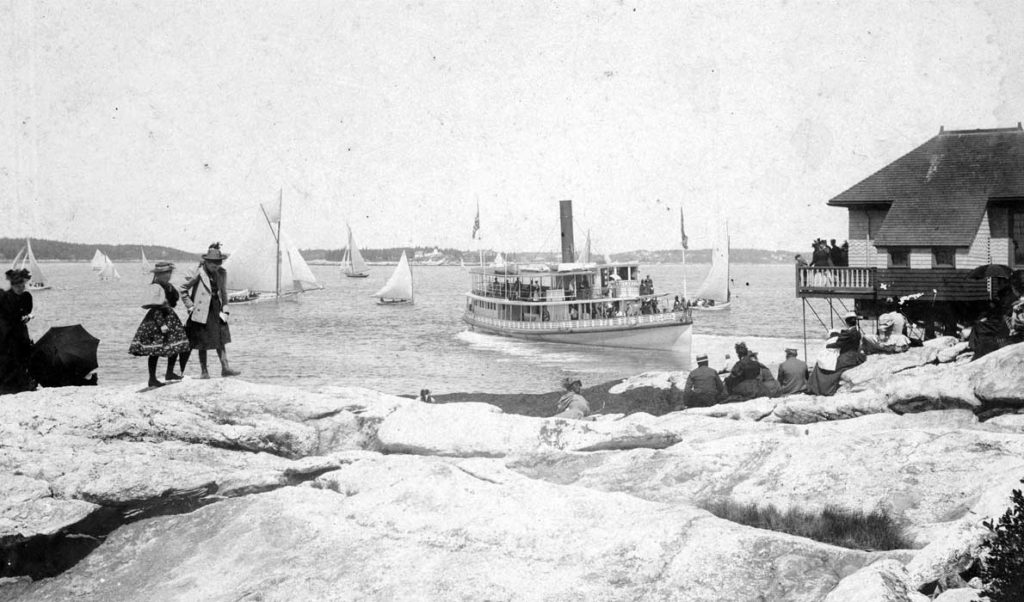 The steamer Islander at Squirrel Island Landing in 1901.