Traverse Burnett opened his presentation at the Governor’s Tourism Conference in Portland on April 4 by showing a photo of his children on vacation on Peaks Island in September 2013. It seemed like an odd choice, indulging in a personal slideshow in front of more than 500 people.

The next slide, from March 2014, was a photograph taken inside a jam-packed minivan, again with Burnett’s children. This photo, he explained, was taken while the family was moving from the Washington D.C. area to Maine.

His point was that the state’s robust tourism economy could help in an area in which Maine is struggling—growing a younger population. Burnett, who works for Digital Research Inc., a company that provides data for the Maine Office of Tourism, explained that he’d been to Portland on business a few times, and thought it might be nice to bring the family to the area on vacation. The vacation led to the decision to relocate to Maine.

Burnett’s story illustrates the potential benefits tourism holds for Maine, while also underscoring a looming threat—a shrinking workforce in a state whose population is stagnant at about 1.3 million. Moving his family to Maine, after the tease of an island vacation here, is a story the state would benefit from being replicated.

Even if tourism didn’t spur in-migration, it’s an important success story on its own. The numbers from 2017 announced by the tourism office were encouraging. An estimated 36 million visited the state, up 2.5 percent over 2016. It marked the fifth-consecutive year of visitation increases, which have averaged 5.7 percent.

One number of particular significance to tourism officials is the first-time visitor count. Research has shown that once people visit Maine, they are highly likely to return Last year, 5.3 million visitors came to Maine for the first time.

Direct tourism spending was $6 billion in 2017, supporting about 106,000 jobs. Spending on tourism-related recreation grew by 8.5 percent last year, and overnight visitation increased by about 7 percent.

George Gervais, commissioner of the Department of Economic and Community Development, in which the tourism office is housed, spoke at the conference’s opening session, and noted that 16 percent of the state’s workforce is employed in the tourism sector. Several colleges, both public and private, have established tourism-related business programs, preparing students to work in the industry.

Speaking of the younger work force, Gervais urged the schools and business owners to “please, train them well.” Tourism workers “put smiles on the faces of visitors,” an important result, he said.

Steve Lyons, director of the tourism office, reported on the campaign based on the theme of “originality,” launched in 2012. It resulted in an average annual increase in visitors of 6 percent, the biggest seen in the last 15-20 years, he said. And there has been a 17 percent increase in those all-important first-time visitors over that period.

Lyons noted that fishing, hiking, skiing, and country inns can be found in New Hampshire and Vermont as well as Maine, so the state must differentiate itself. The plan for 2018 is to continue to market Maine as “the last great bastion of originality,” with the tagline, “This is me.” A series of short films told the story of entrepreneurs and artists living and working in Maine, highlighting the state as a setting for such self-determined lives.

Lyons also showed a sampling of print ads using the theme, including one in a German publication, bearing the tagline phrase, “Das Bin Ich.”

“There’s a shifting landscape in the labor market,” he said. “We need to be as creative as possible.”

Butera touted the state’s efforts to streamline permitting for military veterans starting businesses, and its “hire a vet” program. He also stressed the need to turn to older workers to fill the gaps.

Butera also noted that there are about 28,000 14-15-year-olds in the state, and yet the state issued just 4,000 of the required work permits for that cohort. “We have a pipeline here,” he said, arguing that these teens are playing sports and music and engaged in other after-school programs, limiting the labor pool for tourism jobs.

Earlier in the session, Gervais asked the many tourist business owners and managers represented to indicate if they had done all their hiring for the year. One person responded in the affirmative.

Another panelist, Nate Wildes, operates of Live and Work in Maine (liveandworkinmaine.com), a website posting jobs for those considering moving to Maine.

“Maine’s quality of life is its competitive advantage,” Wildes said.

Burnett, whose vacation in Maine led to him moving here, presented the results of a national online survey and focus group interviews on the state’s image, with about half saying Maine “has most everything needed” for a good vacation.

Among 33 qualities identified, respondents saw Maine’s strengths as a good place to raise a family, with low traffic, crime, property taxes and cost of living, and with friendly, down-to-earth people, and access to nature.

Disadvantages perceived by the respondents were concerns about jobs, a growing economy, education, modern infrastructure, hospitals, and arts and culture. 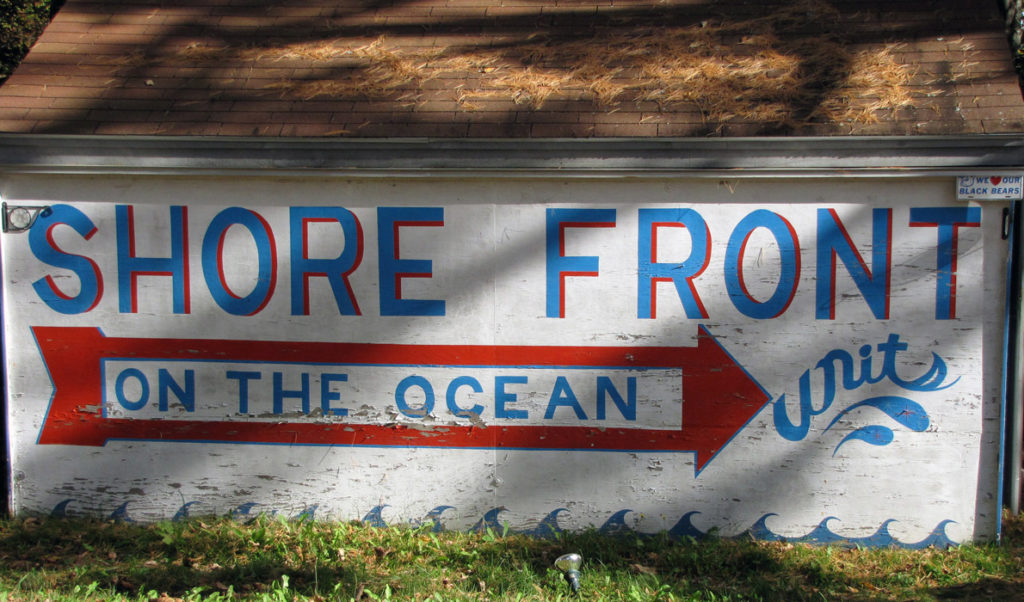 An advertisement used by the Maine Office of Tourism on the theme of originality.