AUGUSTA — It probably would be rude to ask the tourists you see this summer if they are “balanced achievers,” “genuine originals” or “social sophisticates.” But if the Maine Tourism Office is successful, the chances are likely that visitors will fall into one of those three groups.

The strategy for ongoing tourism marketing for the state was unveiled at the annual Governor’s Tourism Conference on March 18. The idea, explained tourism office director Carolann Ouellette, is to target groups that are likely to come to Maine, and—just as important—groups that will spend the most money while they are here.

Ouellette explained that extensive surveying narrowed the focus to these three groups, which are organized around shared values. In the past, the tourism office has built campaigns around age groups—baby boomers were valued for their disposable income—or activities, such as whitewater rafting and hiking.

The groups now being targeted are described based on the values they espoused in surveys about traveling:

“Balanced achievers” like to find new experiences on vacations. They value learning about a place. They tend to be rule followers, but see themselves as free spirits.

“They want to vacation in a place where they have the space and time to reflect on what’s important in life—to change their state of mind, step back from problems, be in the moment…” according to the tourism office’s annual report.

Their guiding life principles include seeking balance, being creative, connecting with nature and courting adventure.

They read magazines, listen to radio and watch TV. Messages tailored to themes of exploration/discovery/learning, creativity/imagination, and self-expression/free spirit resonate with this group.

“Genuine originals” follow their inner compass, make exploring nature a priority and are interested in art, history and cultural activities.

“They try new vacation destinations, they don’t take cookie-cutter vacations,” according to the office’s annual report. “The destinations they choose reflect who they are,” and they are “not driven by luxury, popularity or urban sophistication.” Rather, “They desire authentic trips with exposure to unique local people, cultures and experiences.”

Their guiding life principles include exploring, creating, being in tune with nature and working to live environmentally friendly lives.

Forty-three percent have visited Maine, 18 percent more than once; their average age is 46, average household income is $130,627 and 69 percent are married (38 percent with children). They get most of their information from the Internet and magazines.

Messages aimed at this group succeed most when tailored to themes of exploration/discovery/learning, inner compass/self-reliant and unspoiled/simplicity.

“Social sophisticates” are interested in luxury, flawless service and keeping up appearances. They make travel a priority and believe their vacation choices reflect who they are, “so they look for trendy vacation spots.” On trips, they “want to shed responsibilities [and] find some serenity,” and are not curious about culture, exploration or adventure.

Their guiding life principles include aiming for a higher social status, wanting to look their best and value having fun.

Twenty-six percent have been to Maine (10 percent repeatedly). Their average age is 43 (23 percent are millenials), average household income is $132,724 and they read newspapers.

Messages aimed at this group should be tailored to exploration/discovery/learning, being the best/passion and self-expression/free spirit.

Ouellette said other groups emerged in the surveys, but the three were chosen for their income and spending habits.

Only about a quarter of the social sophisticates and balanced achievers surveyed had been to Maine, but this means they represent potential growth. In the past, research has shown that once people visit Maine, they are very likely to return.

Emphasis has been put on growing the first-time visitors segment, and Ouellette reported that in 2014, 4 million visited the state for the first time, up 43.5 percent over the previous year.

“Originality” will remain an emphasis in marketing, Ouellette said, but three different “flavors” will be developed to appeal to the identified groups. 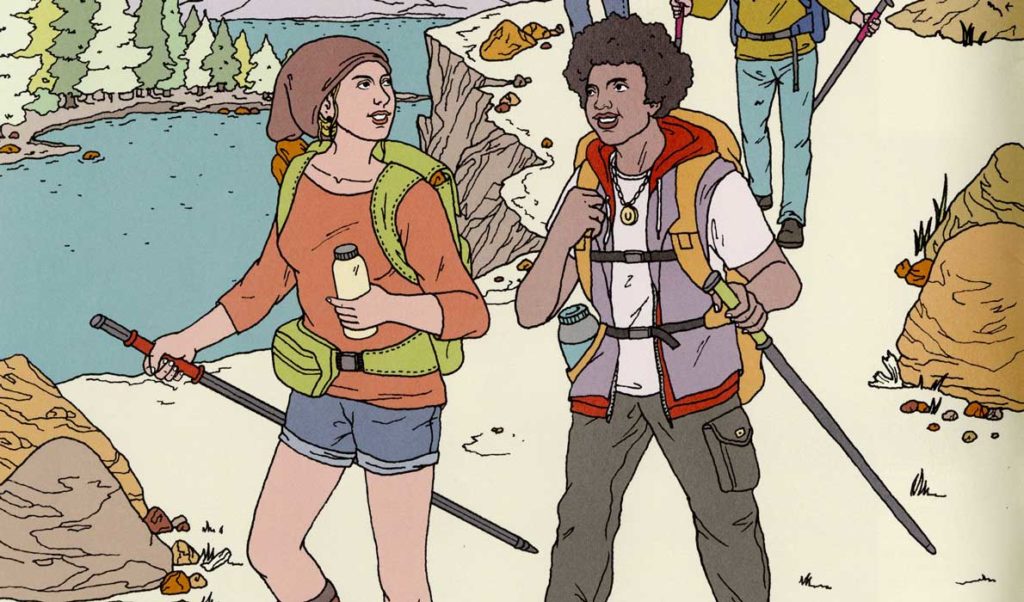 A portion of the image depicting the "genuine originals" group.