Picture an illustrated paper placemat in any restaurant along the coast. The red and white directions for eating a steamed lobster are what pop into my mind. I’m pretty sure that lobster is the only Maine commodity that rates a placemat with instructions on how to break it up and eat it after it’s cooked.

Summer or winter, most residents of the Cranberry Isles already know how to do this, but it got me wondering about how we all learned.

As “summer people” from Rochester, N.Y., my parents only ate lobster when they were on Islesford. It was a treat they had maybe once or twice during a three-week stay. My mother did most of the cooking (which she hated), but when it came to lobster, my father took over.

As a child, I watched my father bring home a dripping paper bag of hard shell (never soft!) lobsters which he would dump into the long sink while he filled a large enameled pot with water and set it on the stove to boil. He would then cook the lobsters for about 15 minutes, and return the bright red creatures to the sink to cool off.

Next, Dad would lay the cooled cooked lobsters on their backs, and with a big knife he split them in two. He then rinsed each half under the faucet to get rid of everything that looked disgusting in the body cavity. The tidy half-lobsters would sit in the fridge, side by side in a shallow baking pan, waiting for the cocktail hour to end and dinner to be served.

With butter melting on the stove, my father would run the lobsters under the broiler for about four minutes to reheat them. A hard-shell lobster cooked in this manner is just as dry and chewy as it sounds. I never liked them as a child, but then I was known as a picky eater. The ironic thing about my father’s lobster recipe was that he would make sure not to rinse out the “green stuff” from the lobster. He, too, was a fairly picky eater, but he actually liked the tomalley. If you don’t understand, just Google tomalley images. The cooked digestive gland looks like baby poo.

In my calls to people to ask what they remember about eating lobster as children, I have never heard anyone describe lobsters prepared as my father did. As for tomalley, it seems people either love it or hate it.

Hugh Smallwood said his mother insisted on using only sea water to boil her lobsters. She always ate the tomalley, but told her children “it was bad for them” so she would have more for herself.

My sister-in-law Karen Smallwood said that her father would steam the lobsters and break off the tails, claws and legs to serve them on a platter. To this day, Karen still asks for everyone’s legs at a lobster dinner, but she does not eat the tomalley.

Joanne Thormann, whose mother Alison was the first “foodie” I ever knew, did not even want to try lobster as a child. She was pretty sure she didn’t like it after watching her mother pick apart and relish every little bit from the body. Not from her mother but from her days of doing prep work as a teenager at the Islesford Dock snack bar, Joanne learned how to pick every bit of edible meat from the lobster for cook Ralph Robbins’ Lobster Newburg. Some people don’t even bother with them, but Joanne would line up a whole row of little legs and roll them all in one direction with a rolling pin to force out the thin tubes of tasty lobster meat.

I called the post office at Great Cranberry to ask Postmaster Eileen Richards what she remembered about eating lobster as a child.

“We didn’t have it very much. Lobster was money in the bank, but I could tell you every kind of recipe using clams!” She does not eat the tomalley, but she recalls, “Nanny Ruth [Stanley] made a lovely dip with it. Why don’t you call my mom and ask her?” It was a great suggestion, since there are now no more people of her mother’s generation who grew up on Islesford.

Gail Colby recalled eating lobster rarely as a child, but when she did it was steamed and eaten on picnics, usually in Dead Man’s Cove, “where you could just drop everything you didn’t eat and the gulls would clean it up.” When I asked her if she ate the tomalley, pronouncing it “tah-molly” as I’ve always heard, she said, “Is that how you say it? We always called it Tom Alley.” (I think she was starting to pull my leg.)

“I liked it. It made a wonderful dip served with crackers. But that was more for the ‘picky-nicky,’ the ‘pompy-dompy,’ you know.” When I described my father’s method for cooking lobster, Gail’s incredulous reply was, “He rinsed it?”

I have no idea where my father learned to cook lobster like that. Maybe from his own mother who could be picky-nicky about many things, but she wasn’t what I would call a “foodie.”

I’m happy to be married to a lobster fisherman who is also an amazing cook. We are fortunate to be able to eat a fair amount of lobster in a year. Neither of us likes to eat the tomalley, but we are always looking for some pompy-dompy ways to serve the rest of the lobster when we want variety from the tried and true steamed version. 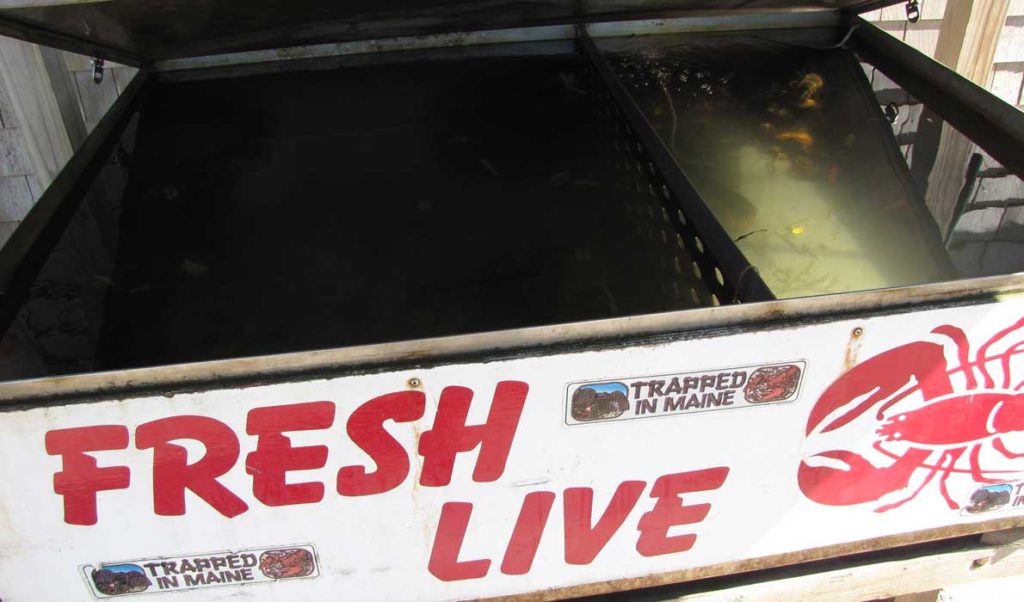