In her introduction to this collection, Christina Gillis notes that in organizing Where Edges Don’t Hold: A Small Island Miscellany, she had in mind readers who identify “with the emerging field of Island Studies as well as those… interested in the ways we experience and interpret place.” She also sought to answer the oft-asked question, “What is it like to live on an island?”

On all counts, Gillis succeeds in her mission. These 20-plus essays, none of them longer than ten pages, offer insight into life on Gotts Island off the backside of Mount Desert Island where she has summered for more than 40 years. The individual essays are gem-like constructions, engaging riffs on island ideas, events, lives. They are studies, yes, but also stories.

As for experiencing place, Gillis is a fine guide: “On a small island in Maine,” she writes in the opening essay, “all paths lead ultimately to the sea.” In another piece, “Island Writing,” she states her goal: “As an island writer, I want not to possess, but to suggest the ways that we can know an island.”

She approaches Gotts from a multitude of perspectives, using, among other things, the writings of island-born Ruth Moore (in whose home she lives), a painting by Harold Warren (one of the “Three Islesford Painters,” as they were known, active in the area in the 1920s), and a photograph of boat captain and builder Lyford Stanley as a child on Duck Island.

The title of the book alerts the reader to a central thesis here: while an island may have a granite foundation, it is always in flux, the tides, for one, bringing about constant change.

“With the line between land and sea ever fluctuating,” Gillis states, “old metaphors of isolation and insularity, whether of a small land mass or of self, are inadequate.” Elsewhere she observes, “Subtraction and absence are never permanent here: disappearance will give way to appearance, absence to fulfillment.”

Gillis’s prose is engaging, her observations often startling in their simplicity: “Boats spend a lot of time waiting,” she writes in “Crossing the Bar.” She presents the lives of islanders with great empathy and sincerity, be it Art and Nan Kellam, the couple who lived year-round on nearby Placentia Island (see Peter Blanchard’s fine We Were an Island, which tells their story), or Rose Atwood, a neighbor whose departure for a mainland nursing home prompts a loving picture of her Gotts Island life.

The book is a sequel of sorts to Gillis’s lovely Writing on Stone: Scenes from a Maine Island Life (2008). She revisits the tragic death of her son, Ben Gillis, who died in a plane crash in Kenya at age 26 and is buried on Gotts. In an essay titled “Strings,” the author describes her six-year-old son bearing two marionettes across an island field, the gift of an aunt, holding them high off the ground while being swarmed by mosquitoes. She runs to his rescue, tosses the puppets to the side, and takes him in her arms, both of them weeping. The emotion here is tangible.

The essays are often enlightening. “Bodies in Motion,” for example, explains the rules related to burials at sea. We learn that every burial must be reported to the EPA and include distance from shore and depth of water, as well as latitude and longitude of its location. “Rules serve bureaucratic purposes,” writes Gillis, “imposing order on the sea.”

You can judge this book by its cover: a stunning photographic view of the Gotts Island bar by Peter Ralston. Several essays originally appeared in Island Journal, accompanied by Ralston’s photographs. The handsome pen-and-ink illustrations here are by the author’s husband, John Gillis, himself an aficionado of Maine islands. A bonus is the bibliography Gillis shares in her introduction, a wonderfully eclectic array of poetry and prose that she uses as a springboard in the book. Where Edges Don’t Hold now takes its place in that enlightening list of literature. 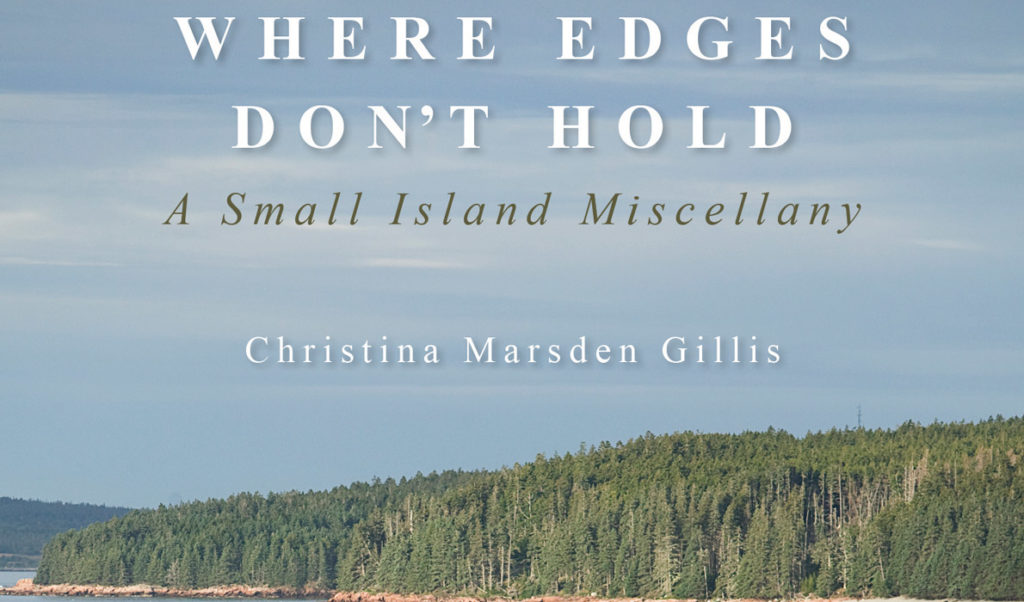