Reflections is a monthly column written by Island Fellows, recent college grads who do community service work on Maine islands and in remote coastal communities through the Island Institute, publisher of The Working Waterfront. Dana Mark works with the Deer Isle-Stonington Elementary School in partnership with the Institute’s SuCCESS program, which provides aquaculture education and mentoring to middle school students. She also works with the Historical Society training volunteers to catalogue the extensive collection of oral histories.

There are three very important bridges you will cross if you are traveling from out of state to Deer Isle.

The first one is the gateway bridge into the great state of Maine over the Piscataqua River—a green entryway welcoming the weary and overworked to vacationland. Lobsters, beaches, blueberries, shopping and the pine forests lay ahead.

It is amusing to know that from Rockland to Deer Isle, as the crow flies, is only about 15 miles, but the driving distance is about 75. And yes, you will go north to go south.

The second bridge you’ll cross is hours beyond first one, as you will need to continue along the coast then go up and over Penobscot Bay at the narrows.

The Penobscot Narrows Bridge has an impressive observation tower that gives both tourists and locals a seaward view like no other, as it is the tallest bridge-observation tower in the world.

My arrival on the island was on the Saturday of Labor Day weekend. After enduring angry Route 1 drivers for several hours with a Volkswagen Golf full of my worldly possessions, I started up the incline of the third and final bridge of the journey. The sea-foam green suspension bridge arches dramatically over Eggemoggin Reach, allowing tall ships to pass underneath, as well as cars to get to a place that was once only accessible by ferry.

The arc is so large that as you ascend you cannot see the other side, almost symbolically, as if you are being transported to another world.

Then comes the causeway, a place I never want to meet a snow plow heading in my direction. It connects Little Deer Isle to Deer Isle, and at high tide the water comes right up to the rocks lining the road, and as the water ebbs it exposes expansive mud flats, sea weed and hidden boulders to the open air.

Main Street in Stonington—my destination—was bustling with all kinds of folks—fishermen, tourists, summer residents, artists, as well as locals driving pickup trucks that my car could fit underneath. A tractor trailer, presumably full of lobster, delicately maneuvered through the semi-controlled chaos as vehicles zipped around desperately seeking a parking space.

Coming onto an island that supports a large population of summer residents on the “last weekend” of summer and trying to meet people felt like a real-life “Where’s Waldo?” but I didn’t know who Waldo was. Everyone seemed spent from a productive summer, or in the process of transitioning, but I guess that is what I was doing too. Was I intimidated? Yes, to say the least.

So here is my advice after three months of being the new kid in town, and how to get through the awkward and sometimes lonely beginnings of moving to a new place by yourself.

Second, ask lots of questions, even if you think they are stupid. Asking about where things are, and talking about different places you have been is a great way to broaden a conversation.

Third, don’t stress if you don’t fall into a routine right away, because it takes time and patience to adjust to a new normal.

Deer Isle is not the type of island community that has a welcoming committee and a firetruck parade to greet you as you come over the bridge; they only do that when the basketball team wins. So it was tempting at first to use the convenience of the bridge to escape, but the more weekends I stuck around, the more at home I started to feel. Moving to a new place by myself has challenged me in more ways than I knew were possible, and slowly this adventure has blossomed into a new life.

Autumn has passed, things have settled down, and so have I, ready for the long winter ahead. 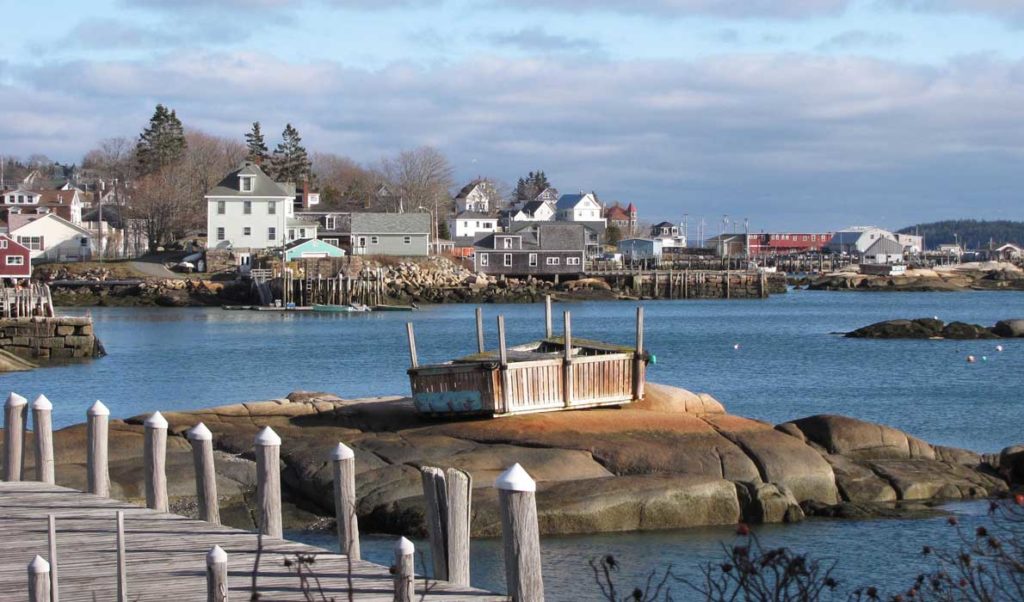