Maine is a state made up of small communities. When my parents chose to move from the big city of Baltimore to the small island town we now live in—Islesford—part of their decision came because of the tightly knit bond within a small community.

That bond brings all Mainers together; we help one another out during crises, and we celebrate with each other as family in times of joy. Even that neighbor you sort of dislike is someone you would lend a helping hand to without a moment’s hesitation.

At Maine Maritime Academy, we now feel that sense of community emerging full force as four of our shipmates went another day missing at sea.

As most people know by now, the TOTE Maritime ship El Faro was declared lost to Hurricane Joaquin on Monday morning, Oct. 5. The search for crew still continues in the wake of that announcement, including the four MMA alums who have been mentioned in the media: Capt. Michael Davidson, Danielle Randolph, Mike Holland and, a member of the class of 2015, Dylan Meklin.

Despite the desperate situation, we train for just such things. No matter how bad a situation at sea becomes, hope for survival always remains strong. The words of our Ocean Survival instructor, John McMillan, ring out particularly strong today in his Carolina accent: “If you tell yourself you can survive, then you can survive.”

Everyone on campus, from the president to the custodians, and the senior regimental staff to the freshmen, feels the wave of anxiety as it passes over the academy. But each one of us is a spark of hope. Each of us leans on the other. As the news continued to trickle in, a surge of courage and support emerged from the student body.

Erin Donlon of the junior class sent word out calling for an immediate vigil and prayer service Monday evening. President William Brennan and his staff immediately organized a candlelight “vigil of hope,” which will be held Tuesday evening. In Rockland, where Randolph and Meklin are from, a vigil was held on Monday.

Here at the academy, the commandant requested the regimental band be ready to play the Navy Hymn at the candlelight vigil on campus. The end of the first three verses send a hopeful plea to heaven:

Oh, hear us when we cry to Thee,

For those in peril on the sea.

Students went around the campus and created cards of hope and solidarity on behalf of the mariners’ families. Even those who do not personally know the missing sailors put notes of encouragement down.

President Brennan held a community update on Monday afternoon, speaking in person to a packed room of students. He spoke at length on the spirit of community we cultivate at Maine Maritime.

“When you began your time here at MMA,” he said, “I joined you in a jump from our training ship. We did that for a number of reasons, including for camaraderie and esprit de corps…

“Our thoughts and prayers are with the crew of the El Faro and their families and loved ones. We are all shipmates. The name of the ship, El Faro, means ‘The Lighthouse.’ I ask this MMA community, a family that stretches around the globe to ships at sea worldwide: let us all become a beacon of hope for the safe return of her crew.”

Few understand the work we do. Over 90 percent of everything in your house came on a ship like the El Faro. We will drive into some dangerous situations to keep our world turning. Although few understand this, everyone in Maine can understand that when fear and doubt rear their ugly heads, the people around us are family enough to surround us with love and ride out the storm.

Benjamin Stevens of Islesford (Little Cranberry Island) is a senior at Maine Maritime Academy in Castine. 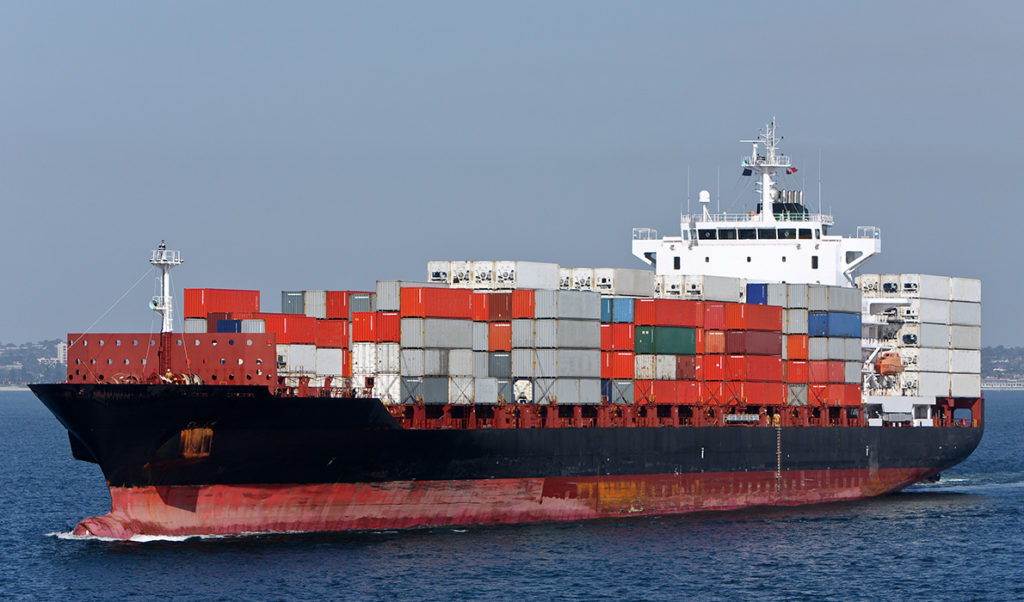 An unidentified ship with containers stacked high on deck.