In his classroom at the Edna Drinkwater School in Northport, John Van Dis asks questions before he knows their answers. It’s an unusual approach for a teacher to take, but for a science teacher, it makes sense.

And that science is so grounded in reality that those students may have discovered a better way to grow kelp, knowledge the burgeoning aquaculture industry would welcome.

During the February break, the classroom looked like a laboratory. Aquariums line a counter, to which a section of PVC pipe on an incline is attached. The students are experimenting with hydroponics, Van Dis explained. A pump circulates water from the aquariums—which hold goldfish—to the top of the pipe, and it then drips back through clay or gravel media, which in turn is used to grow beans.

It is that sort of hands-on, even practical science that Van Dis brings to the classroom. 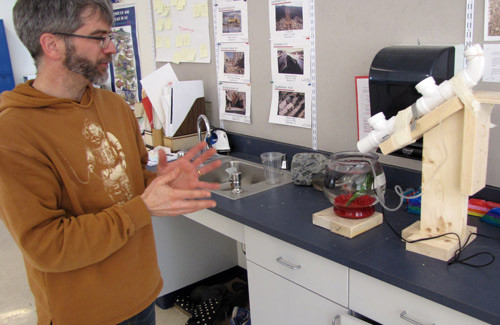 John Van Dis in his classroom at the Edna Drinkwater School in Northport.

Another hands-on project is raising salmon.

“A week and a half ago, we had 200 salmon eggs delivered,” he said, pointing to their temporary home. The salmon came from the hatchery in nearby Orland.

“Last year, we released 197 salmon into Wescott Stream,” in Belfast.

Another teacher at the school, Anna Wood-Cox, had begun the salmon-raising tradition.

“I have more going on than I probably should have for one year,” Van Dis admits with a smile, but the boyish enthusiasm for the experiments is contagious.

The most dramatic science project involves kelp, the sea vegetable that may become one of Maine’s most valuable aquaculture products.

Kelp spores are introduced to a beaker or aquarium. String is then wrapped around a section of PVC pipe and the pipe is immersed in the water with the spores. The spores attach to the twine, and when they reach a certain size, the PVC and string are brought to the “farm” site.

At the site, both ends of a rope are anchored. The growing spores are transferred to the rope as the section of PVC pipe is slid down one end of the rope, and the string unwinds and wraps around the rope.

And this is where the student work comes into play.

Van Dis said the class began wondering whether two strings could be attached to the rope. At the test site in Penobscot Bay leased to the Hurricane Island Foundation, the students “launched” the kelp on Oct. 12, but they split the rope into sections—half with a single string, half with two strings, unspooling in contrary directions. The kids had practiced handling the strings in the woods behind the school before deploying.

By Jan. 26, some of the kelp had “blades,” or leaves, 27-inches long. Though the experiment isn’t over, Van Dis believes the double-string method will produce far more product.

“It’d be really neat if these kids change the industry a bit,” he said.

“We really work with the schools to find a question that they want to answer,” she said. “We involved the students in real science.”

“He was just so excited about the aquaculture that we decided to start working with him.”

Hurricane Island Foundation chartered a boat to bring Van Dis’ students to the island, then used its own boats to allow the students to deploy the kelp.

The class also went beyond science and into marketing kelp, working on concoctions that featured the dried product mixed with herbs and Maine sea salt. At an open house at the school, the students surveyed parents about the taste, as they tried the product on popcorn and roasted chicken. The teacher even worked with students to consider how to advertise and design labels for the concoctions.

“It’s that sense of empowerment,” he said of his goal with students. “They’re seeing that they’re powerful enough to do real science.”

That real science comes with real failures. The first attempt with kelp resulted with no spores being released. But this brought a lesson: “You just keep trying to figure it out,” he said.

Van Dis heard that one parent, in mock exasperation, said, “Oh my god, I don’t want to hear another word about kelp!”

Kelp, which grows through the winter, unlike other species, is “sucking up CO2,” he said, and a “halo effect” has been noted around farms in which ocean acidification is reduced.

“It’s all wrapped around that sense of sustainability,” Van Dis said.

A recent project, building a geodesic dome greenhouse, enlisted the school’s entire student body. Students presented proposals to the school board, and it was funded.
“The kids did all the site planning and site work,” and community volunteers assembled the greenhouse, he said.

Van Dis, at 43, is in his fourth year of teaching. He hails from Ann Arbor, Michigan—a long way from the coast of Maine—but his family vacationed in Roque Bluffs in Washington County. After graduating from Bowdoin College, where he majored in biology and environmental studies, he taught high school for a time, but then became a builder and furniture maker, but grew disillusioned, especially after having his own children.

“I just wanted to do something to make the world better,” he says. 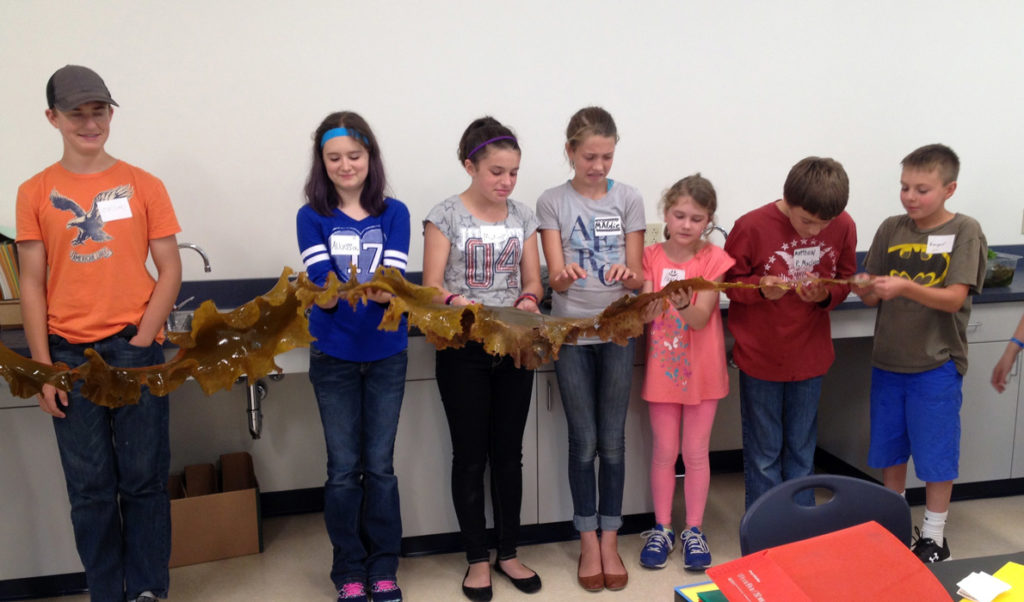