Falter: Has the Human Game Begun to Play Itself Out?

Recently, a lobsterman from Swan’s Island told a reporter that, despite scientists’ finding that climate change has driven lobster populations north from Rhode Island and crashed the lobster fishery there, he believed other factors probably account for the recent lobstering boom in Maine.

“I’m a Christian,” the news story quotes him as saying, “and … in this, I have faith that someone else is in control that has more control over it than I do and has our best interests in mind.”

I don’t know how the Christian lobstermen in Rhode Island and Connecticut view the assumption that God would never visit a climate-related disaster on them. But while reading Bill McKibben’s new book Falter: Has the Human Game Begun to Play Itself Out?, I have been thinking about the biblical word “dominion.” Specifically, as it’s used in Genesis 1:26-28 (King James translation): “And God said unto them, Be fruitful, and multiply, and replenish the earth, and subdue it: and have dominion over the fish of the sea, and over the fowl of the air, and over every living thing that moveth upon the earth.”

“Dominion” is the translation of the Hebrew word radah, whose literal meaning is to tread down, or dominate, with the strong connotation of a ruler’s covenantal responsibilities. Dominion, as one scholar puts it, does not mean to exploit or destroy, but to exercise care and responsibility for God’s domain. In other words, the Bible explicitly directs humans to take care of the Earth.

McKibben, a professor at Middlebury College, wrote the first wide-circulation book about the threat of climate change, The End of Nature (1989), and subsequently helped create the 350.org environmental organization. In Falter, he explains how shirking our responsibilities, especially over the past 40 years or so, has finally brought before us what you might metaphorically call the resulting wrath.

In his reading, two kinds of human irresponsibility have spawned conditions for apocalyptic catastrophe: disregard for our impact on the environment, and the hubris of developing artificial intelligence. McKibben’s early chapters rehearse some of the alarming scientific facts of climate change, including the destruction, now inevitable, of world shorelines and fisheries from rising, warming seas and of forests from increased drought, all directly due to the 40 billion tons of carbon dioxide we pour into the atmosphere every year.

Outlining the virulent influence of Ayn Rand’s philosophy of egocentric greed, McKibben summarizes the history of oil companies in particular, perhaps the most egregiously irresponsible single group of human beings in the history of civilization. Their own scientists warned them in the 1970s that the CO2 emitted through fossil fuel burning threatened the environment. After studying the problem, the companies launched a full-scale disinformation campaign to gull the public and buy its politicians into believing there was no problem. Now we face the results of taking dominion without taking responsibility.

Artificial intelligence and genetic engineering also pose existential threats. They are, in McKibben’s view, edging toward robbing humanity of its humanity, from the dangers of gene modification (whose precursor was Nazi eugenics) to the massive uncertainty involved in creating self-motivated machines—whose personalities are based, after all, on humans and the inscrutable flaws that have already led us to the brink of environmental disaster.

To be fair, the alarming pessimism of the first roughly two-thirds of Falter is balanced by an almost bubbling hopefulness in the last one-third. The technology—primarily solar—already exists to virtually eliminate the CO2 buildup, the most egregious problem of all, before it’s too late. But will we do it?

“We can destroy,” McKibben says, “but also … we can decide not to destroy.”

We live in the profoundest moral crisis in the history of civilization. And moral choices are and always have been precisely religion’s domain. The Bible itself invites us to consider: Does our dominion over the Earth mean we have license to destroy it for our own purposes, or does it mean we have the responsibility to tend and take care of it?

Strange to say, despite the Swan’s Island lobsterman’s troubling innocence, it’s our decision. 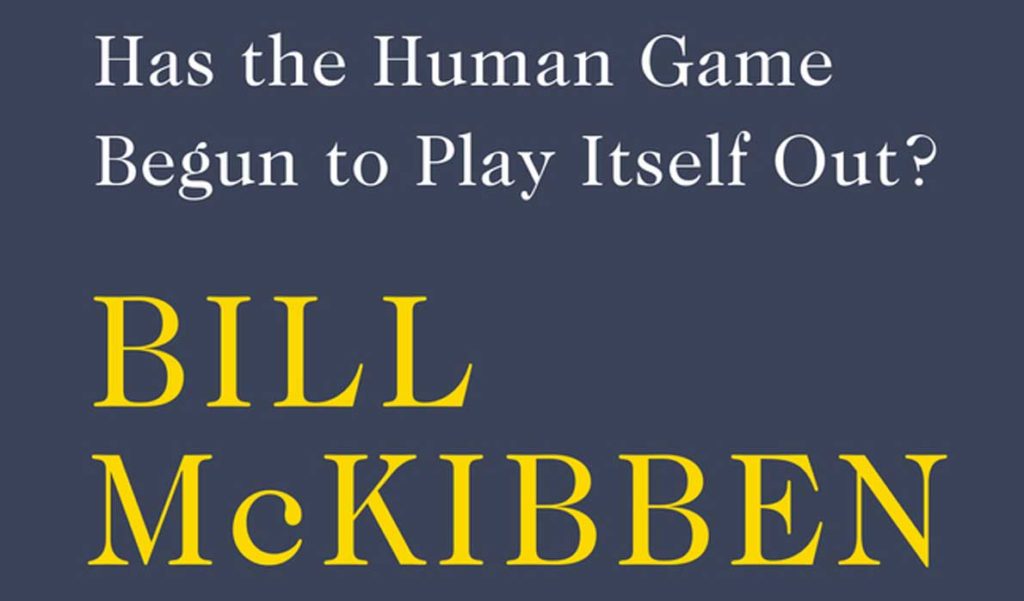