A weeder’s dream vacation is going to a Maine island and staying in someone’s house, getting three squares a day, and all the fresh air you can breathe in exchange for weeding, mulching, planting, thinning, building compost piles, watering and weeding some more.

This summer, I discovered that there are astonishing numbers of people willing to do this. I joined World Wide Opportunities in Organic Farming as a WWOOF host and now, in mid-September, I have hosted six WWOOFers, for varying amounts of time.

Chloe and Deanna, cousins from Fresno, Calif., were first. Chloe was tiny and incredibly strong; she planted potatoes, patiently digging trenches for them, encountered a minor boulder, what she called an “epic” rock, and removed it. Deanna was incredibly organized and laid out garden beds with string and stakes, never quitting until a task was finished. On rainy days Deanna knitted prolifically for her Etsy store, Deroucheau Handmade Knits, and Chloe, aiming to teach creative writing, read Great Novels on her iPad. They worked together, smart phones at their sides, talked with each other incessantly, laughing and chatting.

I loved it. It was like sitting pleasantly next to a cheerfully babbling brook. When they left, the house seemed eerily quiet.

Then came Jonathan and Lisa—Jonathan working on a graduate degree and Lisa bound for a culinary arts program. Incredibly in love, they were inseparable. They finished a permaculture-style hugel (a mound of soil over logs, brush, manure and compostables) started earlier in the season. Lisa planted nasturtiums which bloomed long after she left, surprising me with their appearance. Lindsey, who mulched relentlessly, came next, taking a week’s vacation from her academic advisor job at Queens College.

Janusz was on a two-week vacation from a non-profit in New York City that places artists in studio spaces in temporarily vacant buildings. Tireless, happy to be outdoors, incredibly mindful, observant and helpful, Janusz slid quietly and seamlessly into our family life.

It turns out that most WWOOFers were interested in food and cooking, too, with a common interest in sustainable living generally. That meant helpful company in the kitchen for me. Some baked, flour-covered smart phones on the kitchen counter displaying the recipe. Some prepared whole meals; some did prep work.

I had lessons in enchilada making from Chloe, cooking with soba noodles from Janusz, and one very spirited week with Jonathan and Lisa as mixologists who experimented with some spruce syrup and extract I concocted. Deanna spread peanut butter on apple slices then sprinkled on granola for a tasty little breakfast solution.

As the summer wore on, my WWOOFers ended up helping with food preservation as much as weeding. Lindsey came mid-dilly bean-week, and took home some to enjoy in her Brooklyn, N.Y., home. Janusz hit the preservation jackpot with peach chutney, dill pickles, bread and butter and sweet and sour pickles. Then on his own hook, he harvested rosehips and made rosehip jelly. He staggered onto the Concord Trailways bus laden with jars to share with friends in New York City. Besides that, since he is interested in guerilla gardening in Manhattan, he collected calendula, dill, and poppy seeds to fling into empty city lots.

I’d heard about WWOOFing years ago and thought it sounded a little dodgy: strangers in your house, on your land, arriving with God knows what abilities and inclinations. When last summer a young friend announced that she did WWOOFing, I thought that if she was an example, I ought to give it a try.

I offer a room in the house and suggest a week or two long stay, so I usually end up with fairly mature vacationers. One young woman decided she wouldn’t come to Islesboro because she wanted the more communal feel of a farm that had lots of WWOOFers living together, but Chloe and Deanna met up with and brightened the lives of some of our island’s young people; in short, they partied. Despite the occasional morning-after consequences, they turned in an honest next day’s work.

Lindsey and I got up at four in the morning to go out and watch the Pleiades meteor shower. City-dwellers are entranced by dark island skies and the chance to see so many stars. Almost everyone pulled a vegetable accidentally in addition to weeds.

Most of my WWOOFers made their own breakfast and sometimes we made our own lunches but ate together. Usually, I made dinner for all of us, my household members plus whoever else was here. We’d sit on the porch with a drink or glass of wine, then gather at table to eat. Then came the conversations exploring our pasts, travels, life experiences. Often we talked philosophically.

I didn’t get very far off the rock this summer, but in many ways the world came to me. And my WWOOFers have carried bits and pieces of the island to places around the country. There are more WWOOFers due here in the coming weeks and goodness knows what new recipes or revelations I will have.

Sandy Oliver is a food historian who cooks, gardens and writes on Islesboro. 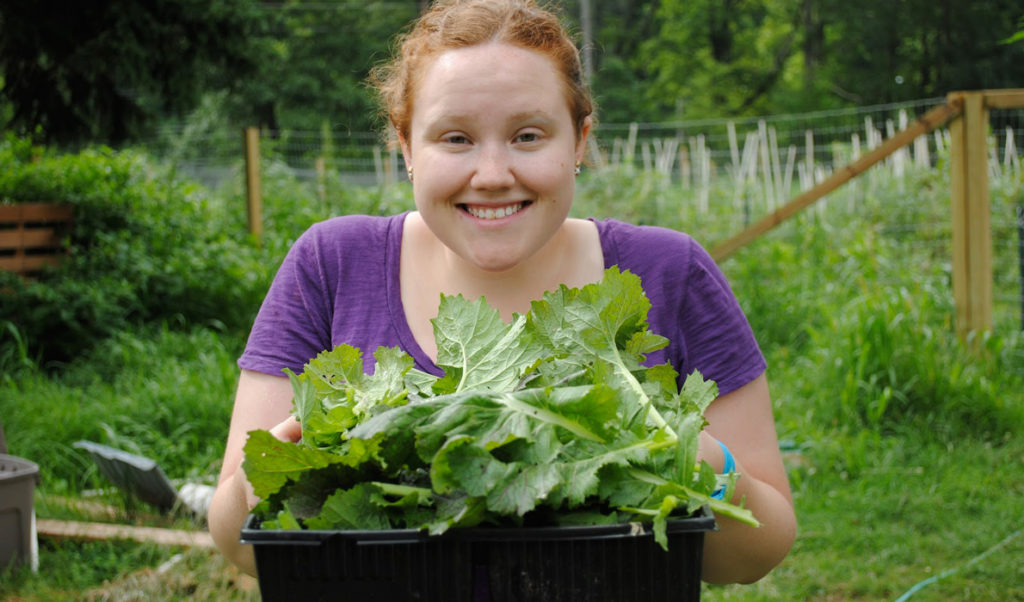 A WWOOFer at a farm in Connecticut poses with the bok choy she grew.