How interesting that Memorial Day should occur in spring.

North Haven observes the day with a somber procession through the village, from the American Legion Hall to the ferry ramp. Community veterans, some in and some out of uniform, oversee the presentation of cedar-and-poppy wreaths in memory of North Haven’s war dead, then stand at attention to listen to the Gettysburg Address and the names of all service members from North Haven—from the Revolutionary War to the present—read aloud. The minister and his wife share the duty these days, but in the recent past David Cooper read them in his signature baritone. He’s now retired, he says.

The raft of flowers in the ocean seemed to represent lives in bloom, cut short.

After a prayer, the company, trailed by children bearing flags and flowers, moves to the ferry ramp. Three veterans designated as the firing squad move to the end of the ramp to fire three shots, startling the ferry terminal pigeons into flight.

Then I play “Taps” out over the water, echoed by an unseen second bugler, whose location and identity I choose to let remain a poignant mystery at this time. The children throw their flowers into the water, leaving a raft of lilacs and buttercups floating in the green sea. The veterans walk in formation back to the parking lot, and then disperse and mingle.

Memorial Day often feels like the beginning of something —summer, specifically, as many of our summer residents arrive that weekend, some for the duration, and some just to say hello and check on their houses before departing until July or August. There are flowers in bloom, and for us here in Zone 5, it marks the end of frost danger, so many of us spend the rest of the day putting in our gardens.

All of those things are true this year, as they always are. And compared to last Memorial Day —an essentially private event—this one felt bustling, cheerful, and blessedly normal. But the trickling denouement of the pandemic, the resurgence of mass shootings, the seemingly unending police violence against black people, has given the concept of memorial ceremonies an extra import and weighty sadness.

Standing in the chill mist of Memorial Day morning, admittedly grateful that it wasn’t a downpour as it had been three hours earlier, I noticed the white candles of the Main Street horse chestnut tree were melting, blossoms drifting to the street to pile up against the retaining wall in a yellowing snow drift. The raft of flowers in the ocean seemed to represent lives in bloom, cut short—maybe that’s always been the intent.

It didn’t hit home before this year. The change in orators, the assessment of friends present and absent, an island child’s serious illness, the recent death of a musical acquaintance, all framed spring’s renewal as one step in a relentless cycle of emergence and decline. Spring is about new life, and spring brings reminders of mortality. They’ve always been there, Memorial Day among them, but they’ve been underlined and highlighted for me now.

I did wind up putting in my tomatoes that evening, surrendering to the persistent drizzle and the mud of my garden. The lined tweed pants I had worn to play Taps became coated with dirt, as did my boots, as did my coat. I started them from seed, and they’ll only be with me a short while—until November, at the latest. Then I’ll coil their withered vines into the compost bin, continuing the cycle of new life and death.

Courtney Naliboff teaches music, theater, and writing at North Haven Community School and lives on the island. She may be contacted at: courtney.naliboff@gmail.com. 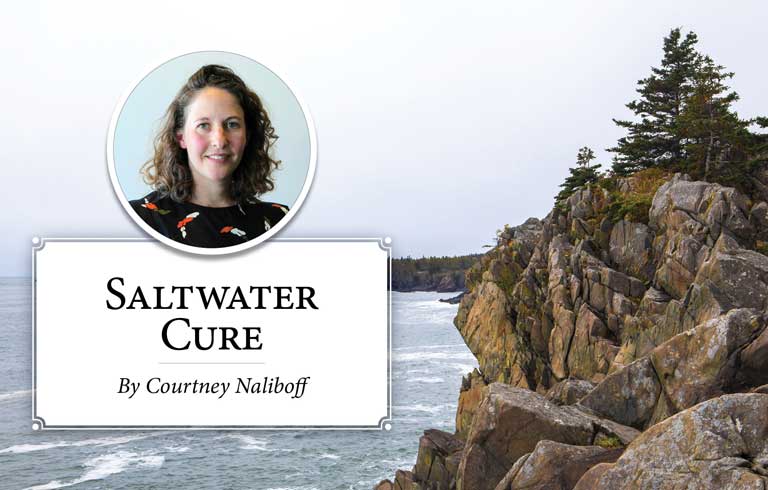