In 1687, a treasure hunter from Woolwich received the highest honors from the king of England.

William Phips was born near the banks of the Back River in Woolwich (then known as Nequasset). He apprenticed as a shipbuilder and ran a successful shipyard until it was destroyed during King Philip’s War (1675–78), the conflict that pitted colonists and New England Native people against each other, and which resulted in catastrophically high loss of life on both sides, along with the destruction of many early settlements.

With his business ruined, Phips elected to take a different career path—treasure hunting in the Caribbean.
By age 32 he had an audience with English King Charles II and the command of the 22-gun frigate James and Mary. His directive was to recover treasure from Spanish vessels wrecked along the (appropriately named) Silver Bank, a nearly 650-square-mile submerged bank in the Atlantic north of the Dominican Republic and southeast of the Turks & Caicos.

In 1687, he discovered the wreck of the Nuestra Señora de la Concepción and salvaged 34 tons of silver, gold, and jewelry—worth $65 million today. In addition to receiving a knighthood and his share of the treasure, Phips was honored by a commemorative medal commissioned by the English monarchs; these medals were presented to Phips, the ship’s officers, and anyone-who-was-anyone in the British Empire.
The front of the medal features classical portraits of King James II and Queen Mary (a royal prerogative). The Latin inscription translates as “James II and Mary, by the Grace of God, King and Queen of Great Britain, France and Ireland.”

The back of the medal shows the James and Maryand Phips’ salvage operations underway—a rowboat is positioned near an exposed section of the Concepción. The inscription at top reads semper tibi pendeat hamus—roughly translated as “always leave your hook hanging.” After some digging I found this quote in Ars amatoria (The Art of Love), a tongue-in-cheek study on romance written by the Roman author Ovid. The inscription was meant to encourage patience. But there was to be little love or patience for poor King James; sectarian riots and a coup led by William of Orange forced him into exile a year later.
The medal shown here is a 1971 restrike from the original die in London, but no less interesting. It was reissued during a territorial dispute between the Turks & Caicos Islands (British Overseas Territory) and the Dominican Republic, when both states contested ownership of the Silver Bank. Phips’ British-funded salvage operations were showcased to reinforce the British claim.

Three-hundred years later, this Woolwich treasure hunter found himself in the middle of a territorial dispute.

This feature first appeared in the spring issue of Maine Maritime Museum’s newsletter,The Rhumb Line, and is reprinted with permission. 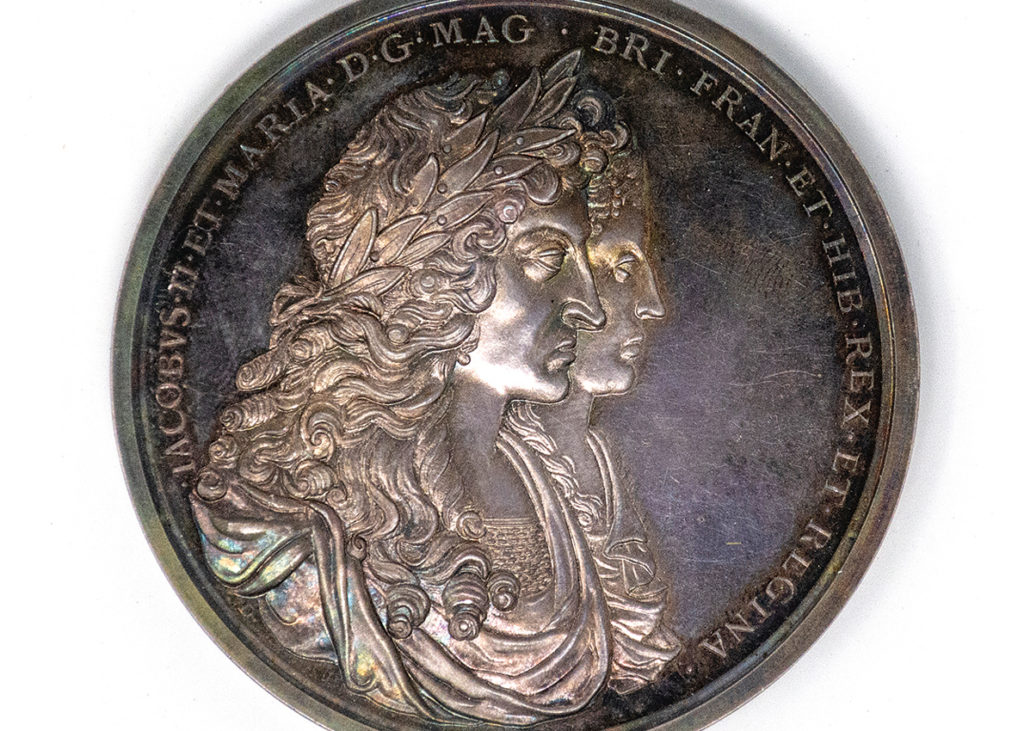