Coach Sandy Nelson and Assistant Coach Sam Bickford, both island natives, are a rare and cohesive team themselves, so passionate about and focused on the game and the devoted girls who play it that ego fades in the shadow of cooperation and coordinated effort. Genuinely humble and mutually complimentary about one another and their respective contributions to the team’s success, Sandy and Sam have overseen three seasons of increasingly inspired basketball.

Sandy was born on Vinalhaven but moved to Massachusetts with her family when she was in the sixth grade. She finished school there, went on to teach physical education and then coach girls basketball at the David Prouty School in Spencer, Mass. Under her leadership, the team won 47 games in a row during one stretch and won the state championship in 1999. Sandy retired, or so she thought, in 2014 when she moved back to her native island.

By this time, Sam had been coaching essentially the same elementary and then middle school girls on Vinalhaven since 2009. In 2014, when the first of those girls were freshmen, the high school girls basketball coach position became open and Sandy, unable to resist, applied and was hired.

At the first practice one of those girls, Cheyenne Bickford, called her dad at home to ask, “Where are you?” It’s a 15-minute drive from Sam’s house to the school. In ten minutes he was at Sandy’s side and the two have been one team with one mission since that day.

In their first year, the girls team made it to the semifinals. In 2016, they went to the finals. On March 4, the girls won the state championship and, with a police and fire escort that grew in numbers and enthusiasm all the way down Route 1 from Lincolnville to Rockland, they and their devoted fans boarded two state ferries for an unusual nighttime ride across the bay. Their tumultuous island welcome: sirens, horns, whistles, fireworks, cheering and applause was apparent an hour later when the boat rounded the bend at Norton’s Point and Carvers Harbor came into view.

I asked Sandy about these last three years and all this team had accomplished.  Typically, she passed on a lot of credit:

“Sam had been with these girls for four years before they were mine. I had his daughter call him at home and tell him I wanted him here with me. He’s been here ever since and I don’t know what I’d do without him. We are such a great team.”

Sam talked about the community support from the island and how much it has meant to him and to the team. The Vinalhaven Lions Club, always busy and supportive of the community behind the scenes, and the Jerry Michaels Scholarship fund made it possible for the team to get to Bangor the night before the final game so they could acclimate themselves to the bigger, more institutional and, what might otherwise have been intimidating, arena.

The season was a long one, from mid-November until March, and required unwavering dedication from the girls, who happily and purposefully stuck it out. Practice came first—before everything!

As the season drew to a close and it became apparent they were going to be in contention, Sandy and Sam reminded them that, henceforth, their lives were not their own, that they now belonged to the parents and supporters back on Vinalhaven who had carried, supported and encouraged them this far.

These girls are a remarkable bunch. They instinctively hand off real time leadership from one to the other at any given moment during a game and each brings her own brand of exceptionalism to the contest. Nearly in unison, Sandy and Sam recite those strengths.

“Deja Doughty is possessed of a sixth sense and can find an open teammate before that girl is even aware she’s open. Ashlyn Littlefield is the consummate outside shooter, a reliable three-point resource when needed. Gilleyanne Oakes cuts and moves, cuts and moves, is the high scorer and is everywhere all the time.

“Paige Dennison just works it and works it and is the defensive balance, lingering on the outside and presenting a real obstacle to an opponent’s fast break. Cheyenne Bickford is always driving, driving, as if there is nothing between her and the basket. Amber Shane is a reliable and aggressive rebounder and executes uncannily soft and accurate second shots from under the basket. First, however, they are a team—our team.”

These girls, all high school juniors, will be back next year, as will their devoted coaches. We can hardly wait. 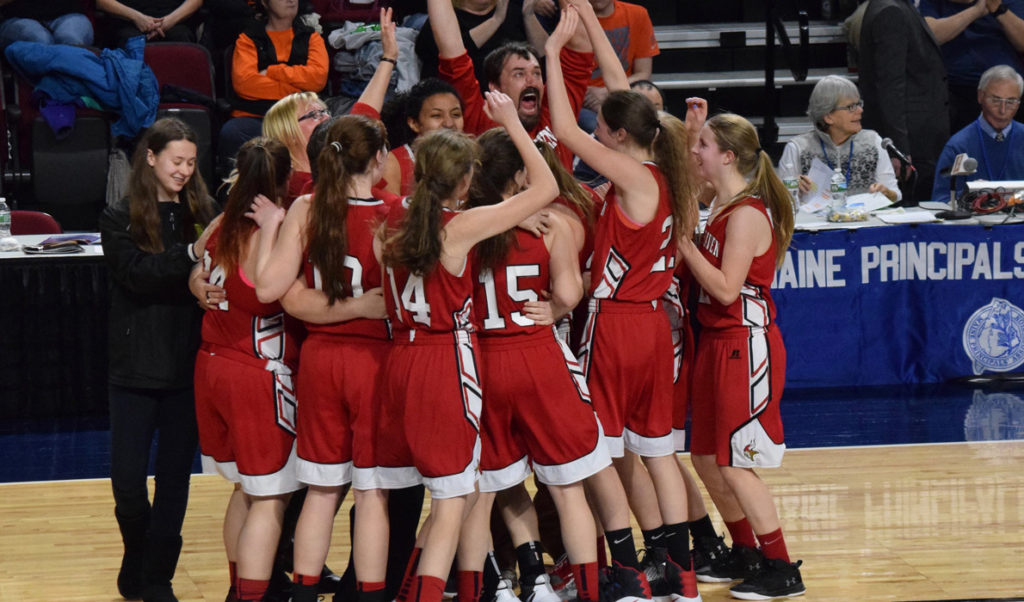